A ‘Green’ President for Colombia? 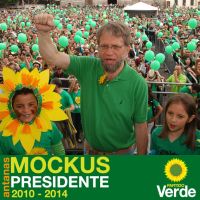 But his popularity is not limited to social networking sites. This week, he surpassed his main rival, former defence minister Juan Manuel Santos, becoming front-runner in the polls for the May 30 presidential elections.

Occasional and diehard bloggers expand on what is reported in newspapers and magazines in Colombia and elsewhere. Influential columnist Daniel Coronell wrote in Semana magazine that “a government of Antanas Mockus and the Greens would not look anything like what we have seen before.”

In an article in the Colombian daily El Tiempo, Uruguayan columnist Laura Gil compared her country’s newly inaugurated charismatic leftwing president José Mujica with Mockus, when the Colombian candidate says he wants to be president “so there will be less suffering and more happiness.”

After studying Mockus’s campaign messages, José Fernando Isaza, rector of the Jorge Tadeo Lozano University, concluded that in a government led by the former mayor of Bogotá (1995-1997 and 2001-2003), political opponents would not face persecution, the slogan “life is sacred” would be respected, and public funds would not be used to buy support.

Whereas anger against the leftist FARC guerrillas helped put rightwing President Álvaro Uribe in office in 2002 and keep him there in 2006, it is now bitterness over the scandals and missteps that have tainted the government and its allies that would appear to be driving Mockus’s campaign, which is based on promises of a break with the recent past.

Mockus, a mathematician and philosopher of Lithuanian descent, appears to be the embodiment of the rejection of Uribe’s political practices and the promise of a very different kind of politics.

After trailing other candidates, Mockus overtook Uribe’s former defence minister Santos in the polls this week for the first time.

According to a poll conducted by Ipsos-Napoleón Franco, a local polling company, 38 percent of respondents said they would vote for Mockus, compared to 29 percent support for Santos. And in the Jun. 20 runoff that will be held if no candidate wins more than 50 percent of the vote, the Green Party candidate could take 50 percent, versus 37 percent for Santos, the pollster found.

In a Gallup poll, meanwhile, Mockus had 47.9 percent support in an eventual second round, against 42.2 percent for Santos, who represents the governing Party of the U.

As support for Mockus has grown, Uribe accused the candidate of being a threat to the continuity of his “democratic security policies” — which embody his government’s hardline approach in Colombia’s armed conflict — because of the alleged weakness of the former mayor’s stance towards the FARC.

When Uribe first took office, in August 2002, the insurgents fired rockets at the presidential palace in Bogotá, which was governed at the time by Mockus.

But when Uribe’s accusation against the former mayor was reported, TV stations dusted off recordings of a ceremony in which the president himself decorated Mockus for his achievements in the area of security.

The president, however, continued his line of attack, referring in another speech to what is needed to beat the insurgents, and saying “lame horses” would not be able to do the job — a clear allusion to the news reported by Mockus two days earlier, that he had been diagnosed with Parkinson’s disease.

The Colombian press attributed Uribe’s reaction to the government’s jitters over Mockus’s unexpected rise in the polls.

But the candidate’s openness and transparency in revealing his disease seems to have outweighed the concerns, and he has continued to gain fans in Facebook and support in the polls.

Mockus looks like the consummate anti-politician. When announcing his candidacy, he took many by surprise by saying “if you are going to vote for me, but are not doing so out of conscience, then you shouldn’t vote for me. Vote for whoever your conscience tells you to.”

In an Apr. 19 debate with the five other presidential candidates, Mockus was asked whether he would bomb a neighbouring country in circumstances similar to the Mar. 1, 2008 incident when the Colombian army launched an air attack on a FARC camp across the border in Ecuador, killing FARC’s international spokesman Raúl Reyes and 24 other people.

Mockus responded emphatically that he would respect the constitution and international treaties signed by Colombia, and that if necessary he would turn to the international courts — showing the audience that he was a candidate of a different stripe.

His words have come as a refreshing change in a country that has witnessed the use of the power of the state to spy on and discredit opponents, as in the scandal over the domestic intelligence agency DAS’s wiretapping of journalists, politicians and even Supreme Court justices; the use of vote-buying and threats by armed groups to influence election results; and the use of slanderous insinuations designed to pressure judges and magistrates.

Mockus and two other former Bogotá mayors — Enrique Peñalosa and Luis Eduardo Garzón — formed a team and ended up joining the Green Party.

After an innovative campaign in which all three set aside their personal ambitions for the good of the whole and acknowledged and supported the qualifications of the others while urging people to choose whoever they liked best, Mockus was elected as the Green Party candidate in an open primary on Mar. 14.

The other two immediately threw their weight behind him, and former Medellín mayor Sergio Fajardo joined up as Mockus’s running-mate after abandoning his own independent presidential candidacy.

For the members of the Green Party ticket, education is an obsession. They make a unique pair: both are mathematicians and former mayors — academics-turned-politicians.

Academia is seen as a pacifying element in today’s civil war-torn Colombia — a peaceful power in the midst of a scenario of political parties weakened and tainted by scandals over ties to paramilitaries and drug traffickers and a lack of an opposition capable of awakening any degree of enthusiasm in voters.

The pessimistic believe the old practices will win out, pointing to the Mar. 14 legislative elections, when the Organisation of American States observers’ mission reported vote-buying and intimidation by illegal armed groups in several provinces.