WASHINGTON, Apr 13 2010 (IPS) - On the second and last day of the largest gathering of world leaders ever in Washington, U.S. President Barack Obama connected the commitments made here on securing vulnerable nuclear materials to the broader goal of a “nuclear-free world”. 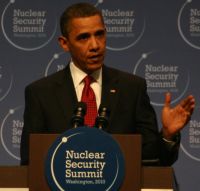 “This is one part of a broader, comprehensive agenda that the United States is pursuing – including reducing our nuclear arsenal and stopping the spread of nuclear weapons – an agenda that will bring us closer to our ultimate goal of a world without nuclear weapons,” he said Tuesday morning.

Obama, speaking at the conclusion of the summit, said the U.S. would be working with other countries to help them secure their nuclear materials and prevent the smuggling of such materials – a goal he said all the 47 countries in attendance at the summit shared.

The summit was the best example yet of the U.S.’s shift to a more multilateral approach to foreign policy issues under the Obama administration, say experts – and an important follow-through on ambitious goals laid out by the president a year ago.

“I think there’s huge momentum here. One of the things I’ve been impressed by is them saying they’d achieve this hard thing and then doing it,” Steve Clemons, director of the American Strategy Programme at the New America Foundation, told IPS.

While the summit was meant specifically to address the threat of nuclear materials getting into the hands of terrorists, recent weeks have seen a spike in the White House’s efforts and successes in the broader movement to rid the world of nuclear weapons. Obama and Russian counterpart Dmitri Medvedev signed a new Strategic Arms Reduction Treaty (START) in Prague on Thursday, a day after the White House released the new Nuclear Posture Review, which forbids the use of nuclear weapons against signatories in good standing of the Nuclear Non-Proliferation Treaty (NPT), forswears the testing of nuclear weapons and development of new nuclear warheads, and commits the administration to seeking Senate ratification and the entry into force of the Comprehensive Test Ban Treaty.

Up next is the review conference for the NPT, to be held at U.N. headquarters in New York in May.

The summit that concluded Tuesday may be one more important step toward further actions on the reduction and nonproliferation of nuclear stockpiles at the NPT and future meetings.

“We got the shift in the Nuclear Posture Review, which was productive, and then the START treaty, which wasn’t a sure thing a few weeks ago. Now you have the Nuclear Security Summit and I think it all leads to the NPT review conference in May. It’s an extraordinary few weeks where there’s significant public attention on nonproliferation issues,” said Clemons.

“The president is a man who is very serious both personally and as leader of the U.S. about the obligations assumed under the NPT. Under the [Obama administration] the U.S. is doing our part,” Bruce Blair, co-founder and co-coordinator of Global Zero, told IPS.

“We’re negotiating further cuts and even reaching out to other countries like China to have a dialogue on nuclear weapons and bring them into the fold. It gives momentum to the international obligation under the NPT for the nuclear weapons countries to negotiate in good faith to reduce their arsenals of nuclear weapons,” he said.

The two-day Nuclear Security Summit ended with several key commitments by some of the 47 countries represented here.

Prominent among those are efforts to strengthen international institutions like the U.N. and International Atomic Energy Agency, as well as raft of bilateral agreements between countries. The most prominent bilateral accord was the U.S.-Russia agreement to dispose of at least 34 metric tonnes of weapons-grade plutonium each – enough for nearly 17,000 nuclear weapons, according to U.S. Secretary of State Hillary Clinton.

Monday, Obama and Chinese Premier Hu Jintao met and reportedly discussed the possibility of sanctions on Iran, which is thought to have a nuclear programme and which has trade ties with China.

It was also notable how much the U.S. engaged with the so-called non-aligned, those states that are not formally for or against any major power bloc. Highlighting this new emphasis in U.S. multilateral diplomacy was a lunch hosted by Vice President Joe Biden at his residence Monday. The list included representatives from 12 non-aligned countries, including Algeria, Chile, Egypt, Indonesia, Malaysia, Morocco, Nigeria, Saudi Arabia, South Africa, Thailand and Vietnam.

The question now, say experts, is whether the commitments resulting from the summit will be fulfilled and will have the cascading effect toward further action on nuclear weapons many are hoping for.

“We think that the summit marks concrete progress towards the goal of eliminating all nuclear weapons. Now that countries have made commitments we’ll be looking for the follow-through. In the U.S. we look to the Senate to ratify the new START treaty as well as ensure there is increased funding for programs that will secure loose nuclear materials worldwide,” Cara Bautista, coordinator of the Campaign for a Nuclear Weapons Free World, told IPS.