MAURITIUS-POLITICS: Voting for the Future 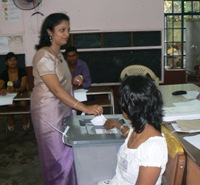 Women voters are ambivalent on the need to increase female representation in the Mauritian parliament. Credit: Nasseem Ackburally/IPS

One seat went to the Front Solidarité Mauricien, a Muslim political party. Ten women candidates only out of the 21 nominated by the two main alliances were elected. Five years ago, 13 women had been elected.

As Mauritians went to the polls to elect a new government in a closely contested election, across the island women were voting for a better life.

The two main alliances – Alliance of the Future, and the opposition Alliance of the Heart – plus a number of smaller political parties and 549 independent candidates took part in the elections.

Not all the female voters interviewed by IPS said they wanted more female representation in parliament, but all the women agreed – they were voting for their future. A large turnout of women voters was seen across the island, though official figures have not been released.

Unemployed Anusha Emrith (22) from Rivière du Rempart, northern Mauritius, says she voted for a change in government because “there is no meritocracy in the island”. Emrith has applied for a job in the public service many times during the past two years and she is yet to get one. She blames her representative in Parliament for not being successful, saying: “Nobody backs (my) application”.

Kavita Nunkoo from Barlow, in eastern Mauritius, wants the government she voted for to bring prosperity to the island and work for the people. Many women are interested in politics but very few would like to take part in an election, even at local level, the women IPS interviewed said.

But Nunkoo, who is an activist from the Labour Party, said if she gets the chance she will stand as a political candidate. She emphasises that many women are unemployed and need help from the government

“They work very late in the manufacturing industry. This is very tiring. I want to improve their situation.”

But another voter, Shireen Allybaccus, thinks there are presently enough women in politics. “Many more women cannot leave their responsibility at home to do politics where one needs the people in the field. Women cannot afford that much time to devote to it.” She voted for male candidates.

Mauritius has not signed the SADC Protocol on Gender and Development that requires member-countries to have 30 percent of women representation in Parliament arguing that provision to include such an action is against the Constitution of the island.

And the two main alliances have not attempted to include more women on their lists of candidates. The Alliance of the Future, led by Ramgoolam, has only 13 female candidates. Berenger’s party has only eight. This is despite Berenger’s promises that he will amend the Constitution so that one-third of the seats available in Parliament could be reserved for women – if he comes to power.

But not all women are worried about female representation in Parliament. “I love my party the Alliance of the Future and its leader Navin Ramgoolam,” Neelam Ramsurrun told IPS as she left the polling station after having voted. “Our family has always voted for him since generations. We would not stop now. He is doing a good job,” she claimed.

Sixty candidates (three from each of the 20 constituencies of the island and two from the island of Rodrigues) will be elected in the first past the post system.