MEXICO: Women Electrical Workers at Centre of Struggle for Jobs

MEXICO CITY, May 26 2010 (IPS) - “Our male coworkers have had to acknowledge it: we have worked side by side in this struggle,” says Emilia Peña, describing the role of women in driving forward the battle waged by thousands of workers to reopen a state power company in Mexico. 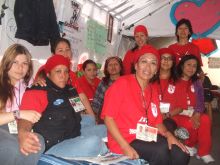 Peña, wearing denim work pants and no makeup, has been unemployed for seven months after working 27 years for the state-owned power utility Luz y Fuerza del Centro (LFC), which was shut down with little warning by presidential decree in October 2009.

But that has not discouraged her from spending hours holding up a protest banner in all kinds of weather over the last few months.

“We electrical workers have suffered a 180 degree turnaround in our lives, because we felt untouchable, or touched by God,” Peña said, while painting the emblem of the Mexican Electrical Workers Union (SME) red and black, on the day that IPS spent with a small group of women workers engaged in the struggle.

“We are starting to understand what our grandparents always told us: that the struggle was for social transformation. And ours is a two-pronged battle: to defend the labour rights won over the past century, and for our identity as women workers,” Peña said at the headquarters of the movement, a protest camp set up in Mexico City’s main square, the Zócalo.

Some 5,000, or 11 percent, of the workers were women, and nine out of 10 of these were heads of households, according to union figures.

The government of conservative President Felipe Calderón justified the shutdown, which was criticised by the opposition and has triggered an ongoing protest for the right to work that has few precedents in Mexico, by saying LFC was wasteful and was providing poor service with an overly large workforce, and that big customers were tardy in paying their power bills.

The SME and other critics, meanwhile, say the measure was aimed at weakening the union and paving the way for the privatisation of power utilities.

Another state-owned company, the Federal Electricity Commission (CFE), took over operation of central Mexico’s power grid from the SME.

One-quarter of all households in this Latin American country of 107 million people are headed by women, who make up 37 percent of the labour force. But only half of all women in the workforce are in the formal economy, and women earn 37 percent less than men on average for the same jobs.

Seven months after the liquidation of LFC, 20,000 workers — including 1,500 women –continue their protest, refusing to accept severance pay and demanding reinstatement in their jobs.

The workers, who take turns staying at the protest camp, where they hand out literature, hold talks, paint signs and banners and lead demonstrations, have also taken their struggle to universities and trade unions.

In December, they met with First Lady Margarita Zavala. And starting in April, they have held a rotating hunger strike to demand that the government engage in talks.

The women “are the heart of the movement,” said Octavio Arenas, the former head of the LFC drafting department, who has designed more than 1,300 metres of banners and signs since the protest began. “The women are working just as hard as the rest. It’s not easy; it involves hours of work that leaves you with aching knees and wrists.”

Peña said her participation in the movement was hard for her daughters to accept. “They hadn’t realised how much the household depended on what I earned until the blow came.”

Her savings kept them going for a couple of months, but after that, her four-year-old granddaughter’s private day care centre “was no longer a priority,” and the family had to start eating in soup kitchens run by the city government.

“At first they were mad because of the economic difficulties,” she said. “They urged me to accept the severance pay. My granddaughter would hug my legs and say ‘Tita, are they going to give you work soon? Will you have money to take me to school?’ These are things that really get to you as a woman, and that made me think how inhumane this system is.

“But we talked, and I told them we had to stick together, because out there things are really tough for women. Now they support me in this,” she said.

In its campaign to justify the shutdown, the government portrayed the workers as inefficient and overly privileged and demanding, and few employers will now hire former LFC employees.

That means the workers, especially the women, have had to be creative in finding new sources of income.

Like Blanca Velázquez, who cooks quesadillas — tortillas stuffed with various ingredients — and sells them at a stand in front of her home in a poor neighbourhood on the east side of Mexico City. Or Elena Esquivel, who sells homemade ice cream outside of a child care centre.

“The participation of women in this struggle has many faces: we are workers, mothers, wives, daughters,” said Cecilia Figueroa, head of Radio SME. “This was our only possible response: to defend what our parents did before us.”

Her improvised sound booth in the Zócalo operates a few metres from the tent where 10 women have been fasting since May 3, after joining the hunger strike declared a week earlier by 80 other workers.

“This is a new generation of struggle, in which men and women participate equally,” said Celia Jiménez, the youngest of the women in the group.

Their protest tent is decorated with flowers, stuffed animals, a few religious images and a large cardboard heart reading “Congratulations Mama” — a present from a male colleague on May 10, Mother’s Day in Mexico.

For Rocío Higuera, the oldest, family is a painful subject. Her four children disapproved of her participation in the hunger strike. Although her two sons have more or less come around, her daughters still refuse to accept it, she says between tears. “But I have to defend my right to make my own decisions.

“I always had to fight for that in Luz y Fuerza, but it’s different in the union. When this struggle started, we women didn’t stay on the sidelines, and we weren’t sidelined by the men either. To the contrary, they themselves have said we are more daring,” said Higuera, who was an office manager at LFC, where she worked for 20 years.

Her smile lights up her face again: “We have a slogan: when a woman forges ahead, there’s not a man who can stop her.”