MOJU, Brazil, Sep 16 2010 (IPS) - “This isn’t women’s work,” they told her. But Benedita Nascimento is now one of the most outstanding success stories of a family farming programme involving palm oil production in Brazil’s eastern Amazon jungle. 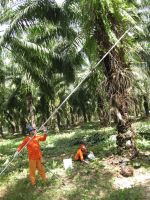 “Eight years ago I wasn’t familiar with the ‘dendê’,” as the African oil palm tree is known in Brazil, she says.

“I used to sell manioc flour (made from ground yucca root) at unfair prices,” adds Nascimento, whose speech received the loudest applause at the Roundtable on Sustainable Palm Oil Second Latin American Conference, held Aug. 24-27 in Belem, the capital of the northern state of Pará.

She earned 170 dollars a month “at the most,” but now earns at least seven times that.

With an incredulous look on her face, Nascimento holds up a July receipt showing the sale of more than 2,500 dollars in oil palm fruit to Agropalma, a Brazilian company.

The company, which controls two-thirds of palm oil production in Brazil, discounts from each payment the cost of the fertiliser and other materials that have been advanced to the farmers, the monthly payment on their loans, and the cost of other services provided to the small farmers through the programme it is carrying out in conjunction with the Pará state government.

But the “relief” brought by the much less physically demanding work is what Nascimento values the most, even more than the steady income, which is guaranteed by means of a 25-year contract with the company.

The heavy work of clearing the land with the slash-and-burn technique, plowing the earth, planting the cassava, cleaning and harvesting, in a never-ending cycle which held no prospects of improvement had Nascimento so discouraged that “I was thinking of leaving,” as many of her neighbours have done, she tells IPS on a visit to her home in the rural part of the municipality of Moju, some 200 km from Belem.

By contrast, she, her new husband and her 18-year-old son only have to dedicate two or three days every two weeks to cutting down and carting off the oil palm fruit, besides a twice-yearly pruning of the trees, as well as fertilisation and weeding, she says.

Family farmers like Nascimento now have a higher yield than the 39,000 hectares of oil palm directly cultivated by Agropalma, which produce 22 tons a year per hectare.

The first three years were tough, though, she says, with no harvest and with the arduous work of caring for the growing palm trees, besides the expenditure on seeds, fertiliser and equipment, which were financed by loans from Agropalma and the Banco da Amazônia, a state-run regional development bank.

And before that, she faced the uncertainty of whether the company would accept a woman on her own, with two teenage daughters — who no longer live with her — and her youngest son, who was 10 at the time.

She has lost contact with her first husband, and the second, the father of the son who helps her out on the farm when he’s not doing homework or attending class at a high school in a nearby town, was murdered on a boat that was transporting lumber. She got together with her third after she got involved in palm oil production.

“I wasn’t born to serve as a donkey for any man,” Nascimento says, bursting out in laughter after commenting that she has little “tolerance for excesses by men,” which is “too bad for my husbands.”

She also had to overcome her misgivings about the business arrangement she was offered. “Agropalma will take your land,” “it’ll turn you into slaves,” “that’s not a crop for poor farmers,” said members of rural trade unions opposed to the programme.

The boom in African oil palms, especially for the production of biofuels, has drawn much criticism from activists and others who argue that it is socially and environmentally unsustainable, because of the deforestation that it has driven in Asian countries.

But Nascimento forged ahead, and was awarded one of the first 50 parcels of land, distributed in 2002. As a result of her natural leadership skills, from 2007 to 2009 she headed the Ramal do Arauaí Community Development Association, which represents in Agropalma part of the 185 families who cultivate oil palms on 10-hectare plots.

Word of Nascimento’s success got around, and now 36 of the oil palm parcels are farmed by women, who help and advise each other, “because we are all supporting families and we want to be the most successful farmers, for our kids’ sake, so we share know-how and support each other,” she says.

The programme is for poor rural families who depend on agriculture for at least 70 percent of their incomes. After 25 years, the average productive life span of an oil palm, ownership of the parcel reverts to the farmers, who will be free to use the land as they wish.

In the first three stages of the programme, from 2002 to 2005, the government of Pará distributed land to three groups of 50 beneficiary families who lived near Agropalma lands.

The fourth stage incorporated another 35 families, who had been settled by the Ministry of Agrarian Development on land 20 km away. The Association of Small Farmers of Água Preta, which represents these families, is also headed by a woman, Raimunda da Costa.

“When we have support, there is no stopping us women,” she tells IPS. “I want to serve as an example for other women.”

But another of the women involved in the project, 44-year-old Hilda Paiva da Silva, is still facing problems on her parcel of land. She earns around 580 dollars a month, but nearly half of that goes towards paying off loans. And she is unable to support her six children on what is left.

The land was in the name of her ex-husband, “who never liked dendê,” saying it “only got you into debt,” and neglected the trees, Silva says.

When he left in 2008, he transferred the contract to his sister, Nascimento, who helped Silva harvest the palm oil fruit a year later.

Silva is now working hard to avoid joining the ranks of the 10 percent of the farmers who have failed to make a go of it in the programme.

But she inherited the land without any tools or equipment — not even a donkey to transport the fruit — so when the harvest is poor, she once again depends on the much more labour-intensive and much less profitable cassava for an income, she complains.

She also says oil palms demand constant efforts to fight pests, and that a high yield is needed to cover the loans, the payments for which are automatically deducted when the farmers sell their fruit to Agropalma, which produces biodiesel and supplies the food and cosmetics industries.

And in 2009, international prices of palm oil plunged to almost half their former level as a result of the global financial crisis, says Nascimento, who lives on a farm on the banks of a small river one km from Arauaí, a hamlet of around 30 houses.

Agropalma employs 4,748 people, including 830 women, most of whom work collecting the fruit that falls to the ground when the clusters are cut at a height of up to 12 metres.

“Sometimes they earn more than the men” who cut down the bunches, because the fruit gatherers are paid on a piecework basis, on top of the minimum monthly Brazilian wage of 300 dollars, says Flavio Trindade, the company’s agricultural production manager.