MARIGOT, Sep 17 2010 (IPS) - In the evening the lowering clouds burst. Through the night they loosed their torrents on the southeastern coast of Haiti. 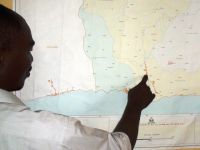 The next morning, the water of the Felse River is at the bumper of an SUV fording it. Another metre and the engine would be submerged.

Just two years ago, the riverbed was only 10 metres wide. Then four hurricanes hit the area in 2008. Now the flood plain spans 300 metres of stone and gravel. Countless tonnes of rocky debris from the mountains rising sharply above the coast have sluiced down to ream out this valley and spread a fan of siltation out into the turquoise Caribbean.

The Felse crossing is on the main route out of the town of Marigot, east of the small city of Jacmel. On the other side, the gravel road takes a sharp turn north and heads up into forested hills. Quickly it becomes more stream bed than road, cutting down to bedrock as it writhes up steep slopes.

For Frisnel Désir, a young Haitian agronomist, this is often the morning commute. Désir works for the Food and Agriculture Organisation of the United Nations. His mission is to coordinate efforts of local communities and governments to help farm families coax a better livelihood from their land and water.

In the wake of the Jan. 12 earthquake, the history of Haitian urbanisation has paused in a rare moment of suspended animation. At least 600,000 people were forced to return from pulverised urban areas to the countryside as internally displaced people. This represents a reversal of a long-term, international trend.

Rebuilding the country as it was before would encourage most of these refugees to settle back into Port-au-Prince and recreate the same human, economic and environmental crises there as before, perhaps worse. And it would again leave the countryside isolated and bereft of resources.

Many Haitian groups focus on decentralisation as a critical requirement for a sustainable recovery. If a new economy could be constructed in the countryside based on adding value to farm products and providing agricultural services, according to FAO chief agronomist Volny Paultre, many displaced families could integrate productively into rural communities. This would relieve historic pressures on a terminally congested, dysfunctional metropolis riddled with desperate bidonvilles (shantytowns).

Decentralisation would require new rural infrastructure, housing, businesses and jobs, along with strengthened local governments. Substantial amounts of aid would need to be dedicated to the countryside in coordinated programmes to make it work. It would also take broad recognition that the backbone of Haiti is the millions of small farmers who, since their revolution two centuries ago, have clung doggedly to their land, communities and culture in the face of invasions, dictators, hurricanes and the depredations of globalisation.

There are some crops which Haiti already has a comparative advantage in exporting, and many agree that increasing support for them would make economic sense. As Paultre told IPS, "There are two reasons why the population doesn't drop dead of starvation: because we have mangoes and avocados."

Large-scale plans for agro- industrial development proposed by some international organisations and foreign governments, however, fail to leverage the strengths of local efforts already underway. And they run the risk of enriching a few big landowners, while undermining small-scale agriculture and the communities that depend on it.

The FAO has a long- established network of mainly Haitian agronomists and technicians around the country, and is led by a French-speaking African. Along with them, some larger non-governmental organisations such as Oxfam are doing parallel work with rural grassroots groups around Haiti to strengthen peasant agriculture. Local organisations such as Konbit Pou Ayiti, just down the road from Marigot in Cyvadier, have long been driving initiatives for reforestation, fruit-tree cultivation, self-help housing and efficient cook stoves.

Over many years, these groups and their communities have evolved technologies and economies well-suited to the Haitian environment. Their work provides templates for a human- scale approach to rural development in Haiti.


The Jan. 12 earthquake struck mainly Port-au-Prince, Haiti’s capital, and surrounding areas. Although Jacmel also was hit hard, there was little damage in Marigot. But farmers’ urban markets and distribution systems were devastated.

All over Haiti for many decades, however, the countryside has suffered a series of rolling calamities. Damaging agricultural practices, most recently cutting down trees to make charcoal for cooking fuel, have left only an estimated 3.8 percent of the land forested. Lack of equipment, credit and roads has crippled small farmers. Hurricanes, floods, landslides and erosion, like that seen along the Felse, have washed away fertile soil and decimated rural infrastructure.

Serious damage has been inflicted as well by economic disasters. Former president Bill Clinton recently apologised before the U.S. Senate for the destruction of the livelihoods of Haitian rice farmers by policies imposed by Washington and international financial institutions, but many of these continue. Domestic politics has treated the countryside no better, with at best neglect and at worst brutal repression by a half-century of dictatorships, interspersed in the past two decades with weak elected governments.

Today, while over two-thirds of Haitians still live in rural areas, well under one-third of the country’s output is produced there. Around one million small farm families scratch out a bare subsistence on miniscule plots of depleted soil. Over 80 percent earn less than two dollars a day.

This morning, though, far up the rocky track into the mountains, Désir is clambering down the rough stone walls of a project designed to reverse some of the processes that ravage the Felse Valley.

With technical and financial support from the FAO, local communities are building a system of erosion controls extending five kilometres up this steep valley. A series of terraces, contained by hand-built stone walls and backfilled with earth, catches rainwater and reduces erosion.

Each terrace creates a new strip of arable land 10 metres or more wide, where corn, beans, sugar cane and other crops are planted among the pre-existing trees. More seedlings are being grown in the project nursery for planting on the reclaimed land. Participants have also built stone irrigation canals to channel rainwater into their fields, all with hand tools and manual labour.

Looking down the steep ravine, Désir recalls: “Before, this hillside wasn’t arable. So we organised local people to build these terraces. Then we gave people bean and corn starts to plant on them. Now not only have we reclaimed this land for farming, but we’ve also protected the villages below from flooding.”

This particular project is the first one locally on which the FAO has collaborated with the World Food Programme, a partner United Nations organisation. The WFP provides in- kind compensation with its Food for Work programme, the agronomist explains, while the FAO payrolls what is known as Cash for Work. Fifty-four local people in two teams are working on the project for three to four months. Every two weeks they receive their pay, which stimulates the local economy.

The FAO is working on 17 such micro-drainage reclamation projects in the Marigot area, and plans to expand the programme. On a plateau further up in the mountains, Désir says, people plant different crops, including beets, cabbage, onions, carrots and lettuce. The climate is drier there, so the FAO is training farmers in how to capture rainwater in reservoirs and cisterns and conserve it with drip irrigation.

After a bone-jolting ride back down to Marigot, the coastal road is paved. A couple of hundred metres offshore, a rowboat rides the swell. Two men are standing in it, casting a small net by hand. The FAO has been working here too to mitigate the downstream effects of the choked river.

The erosion has washed so much sediment into the sea that it has damaged near-shore fish habitats, the agronomist explains. The local fishing industry has been hurt by the reduced yields, partly because its level of technology is so low. Few have big enough boats or motors to range out beyond the shallows and catch the bigger fish found there.

To remedy the situation, the FAO is helping local communities organise fishing associations, with support from local governments. Four million dollars from Spain and 375,000 dollars from the national government are enabling the associations to buy larger boats with better motors and equipment so they can fish further offshore. The project is in its infancy: so far each association of about 150 people has just one boat, which members have to take turns using.

“Fishing has never fit into the framework of the government’s agricultural policy,” Désir says. “But as it becomes more profitable, a certain synergy could emerge between downstream and upstream, fishing and farming.” Perhaps, he suggests, a small local tax could be levied on fishing that would go to protect upstream drainages that all depend on.

Désir emphasises that all work on the projects is done by local communities and governments, with support from the national Ministry of Agriculture and sometimes international donors. The FAO provides expertise, materiel and some funding, as well as helping to coordinate efforts. Each district has a series of working commissions that bring NGOs and governments together to coordinate projects in agriculture and other domains.

On the terracing project, for example, the six community organisers who mobilise local citizens are employed by the Ministry of Agriculture. But they and others receive on-the- job training from the FAO within the framework of the project.

The catastrophes these modest initiatives respond to are mainly long-term, slow-motion ones. But the appropriate technology they provide and the community organisations they strengthen can have important impacts on the daily lives of very poor people struggling to stay on the land.

Meanwhile, Haiti recently dodged one bullet when Hurricane Earl veered north of the island. But more storms menace before the season ends in November.