PORT-LOUIS, Oct 19 2010 (IPS) - The small island state of Mauritius is the only African country likely to meet all eight of the United Nations’ Millennium Development Goals (MDGs) by 2015 – at least on paper. But its citizens say government could do more to improve livelihoods, gender equality and environmental sustainability. 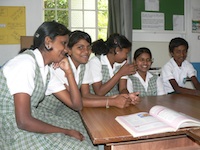 Although Mauritius’s 2009 MDG figures, released in September by the government;s Central Statistics Office, show it is pretty much on course to achieve all MDG targets, social activists say the results are misleading because the MDGs focus only on selected problem areas.

“There are other real issues [that need to be addressed], like debt, non-communicable diseases, pollution, insecurity and violence, and so on, that have a negative impact on our society,” says Vidya Charan, executive director of non-profit organisation Mauritius Family Planning and Welfare Association (MFPWA).

Charan is worried the government will use the positive MDG figures as an excuse to ignore other social problems, such as the decline of employment in the textile and manufacturing industries or environmental destruction caused by the ever-growing tourism and construction industries.

In terms of the MDG framework, Mauritius is certainly looking good. Less than one percent of the population of 1.2 million is deemed to be living in extreme poverty (MDG 1); economic growth is rapid and per capita income is above $4,000 (MDG 8).

Mauritius has already achieved MDG 2, universal access to primary education in the early 1990s. It has met MDG 4, reducing of the under-five child mortality rate by two thirds, and MDG 5 of improving maternal health – maternal deaths holding steady between 2007 and 2009.

In terms of achieving environmental sustainability (MDG 7), Mauritius can show, among other factors, that it managed to decrease consumption of chlorofluorocarbons from 65 metric tonnse in 1993 to a negligible amount in 2004.

The island state offers citizens a range of free social services, including education from primary to tertiary levels, public health services, public transport for students and the elderly as well as subsidies for basic food items and gas.

The third MDG, gender equality, is a blot on country’s MDG copybook. Although the government’s report claims it managed to eliminate gender disparities in education, women’s participation in the labour force and politics is still an issue.

“Girls do well in school, but they do not get the best jobs because our society is still dominated by men. Most of them stop at the middle-management level and do not reach the top, except for a few,” explains Charan.

Problems that the MDGs don’t show, for example, include are health concerns, like diabetes which remains a major concern in the country. A quarter of the population is diabetic, another quarter pre-diabetic, while 30 percent suffer from hypertension and half are obese, according to 2010 national health department figures.

Unemployment is at a low eight percent, but there is concern about the fact that the island depends more and more on foreign labour to work in the textile and manufacturing industry.

“Employers prefer foreign workers because they are cheap [and prepared to] work night and day, even during the weekends,” notes Veena Dholah, executive member of the General Workers Federation (GWF). She fears this could ultimately result in increasing unemployment and poverty among Mauritian nationals.

In addition, the island loses large areas of natural environment and agricultural land each year to new infrastructure to keep up with the country’s continued, rapid development. Government has made the construction of roads, hotels and shopping malls a priority on the duty-free tourism island to bring in sought-after foreign revenue, neglecting the serious implications this has in terms of environmental degradation and food security.

Solange Potou, director of non-governmental organisation (NGO) Nou Nouveau Baz, which assists the poor in the suburbs of capital Port-Louis, says even though people don’t fall within the parameters of extreme poverty – living below $1 a day – they still struggle for survival, largely because of the island’s high prices.

Since 75 percent of its food supplies as well as petrol and machinery are imported from neighbouring countries, basic commodities are very expensive on the island. “This not only affects the poor but even the middle class,” laments Potou.

The basic subsidies government provides on rice, flour and cooking gas are not enough to enable people to afford a good livelihood, she adds.

“We are not producing enough locally, and this is very risky for the food security of the island in the coming years”, he notes.

It’s a catch-22, Mangar says. Farmers sell their land to property companies to make money, which they then have to spend to buy expensive, imported food, since they don’t produce it themselves any longer.

Mauritius still has many social ills to cure, even if it hits all MDG targets.