PODOR, Senegal, Nov 29 2010 (IPS) - The harm done by female genital mutilation is still enormous in Podor, a city in the north of Senegal, say officials at the local hospital. While the practice is declining slightly, some religious leaders in the region still support it. 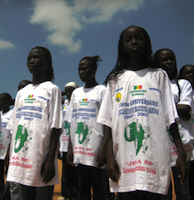 Commemorating the 10th aniversary of a declaration abandoning FGM in the town of Malicounda Bambara: progress elsewhere has been slow. Credit: Heba Aly/IRIN

On Oct. 3, religious leaders from 60 of the 300 villages in the district approved a declaration to abandon genital mutilation and early and forced marriage. But other clerics have spoken out against the declaration, defending both practices as an integral part of local traditions.

Female genital mutilation (FGM) has been forbidden by law in Senegal since 1999, but the practice has continued briskly in Podor, despite campaigns by NGOs discouraging it.

The U.S.-based NGO Tostan (the name means “breakthrough” in Wolof) encourages women and marabouts in Podor to give up excision and forced marriage. According to its regional coordinator, Abdoulaye Kandé, to speak against FGM is not the same as speaking against Islam or trying to introduce social norms contrary to the customs of the region.

“Between now and 2015, the Senegalese government has set itself the objective of making the practice of excision a distant memory for the communities who still subscribe to it. Our organisation has to collaborate with the authorities to effectively end FGM and forced and early marriage. We will continue to raise awareness of the communities on the harm of these practices,” he said.

But Amadou Ba, a sociologist at the Gaston Berger University in Saint-Louis, a city not far from Podor, says this practice cannot be eliminated in a day and one must first make the merits of ending it clear to local opinion leaders without frustrating anyone.

“To sensitise the masses or a group of people will have no effect. FGM, early and forced marriage are etched into the lives of the communities of Podor,” says Ba.

“How else can one understand that a young girl who has not been cut is excluded from a group of women? She is not considered a woman. Therefore it’s preferable that organisations fighting against FGM put in place other communication strategies and approaches to address the practice of excision.”

According to certain religious leaders in the region, to fail to practice excision and early marriage is against the precepts of Islam. Thierno Hamath Mbodj, the imam of a mosque in another town in the area, Diattar, says that Islam has never forbidden the practice of excision or early marriage of young girls.

“To cut a girl is fine, and strongly recommended by Islam. These practices have existed for a long time and never had a negative impact,” he said.

“No one can forbid us to do what Islam authorises. We will continue to cut our girls and we’ll give them away in marriage at the right time.”

But Gamaji Saré, another imam from Podor, doesn’t share this view. “Some say that it’s not mandatory, others the opposite. Religious leaders must meet to agree on abandoning the practice, because everyone knows it is forbidden by the law. Even Islam doesn’t authorise it, it’s more a part of our tradition.”

Hawa Abdoul Bâ, a member of the Podor Community Management Committee, says that women are afraid not to excise their girls. “According to what we know, a woman who is not cut is difficult to satisfy sexually. That’s why one must take a daughter to the old lady to cut the clitoris so she can control her sexuality until she’s married,” she said.

But Aminata Ba Diallo, a former FGM practitioner from Podor, said that parents no longer take their daughters to have them cut. “I was speaking with a friend who is still cutting. She complained that parents no longer bring their daughters. In my neighbourhood, Somna, from January until now, only 12 girls were cut and their parents are being threatened by the authorities. The practice is shrinking.”

According to health officials in Podor, the side effects of female genital mutilation that they are seeing are enormous. Aside from the removal of the clitoris and the minor lips of the vagina, midwife Fatou Diaw Sène lists cases of sexual dysfunction, tetanus, fistula and difficult childbirth as frequent experiences amongst mutilated women.

Dr Maodo Malick Diop, the chief doctor of the Podor health district, explains that FGM makes birth difficult because of the narrowing of the vulvo-genital area.

“The minor lips of the female genitals play a large role in childbirth. They are elastic and open to allow the head of the baby to pass through. With excision, they lose this elasticity. Complications linked to excisions frequently force us to resort to caesarean sections,” he told IPS.

The risk of repeated caesareans, according to Diop, has often led women to have tubal ligations done to avoid future pregnancy and protect their health.

In Podor, he said, seven of ten women who come to give birth have undergone genital mutilation.

“Excision is a practice to be condemned,” he said.