CANCÚN, Mexico, Dec 6 2010 (IPS) - What some people view as modest but real progress in the climate change talks, now in their second week in this southeastern Mexican resort city, others see as no more than smokescreens or “false solutions.” 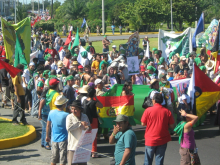 The Secretariat of the United Nations Framework Convention on Climate Change (UNFCCC) announced three advances this weekend. The first is a “near agreement” that carbon capture and storage might be an eligible project activity under the Kyoto Protocol’s Clean Development Mechanism (CDM), “provided it complies with stringent risk and safety assessments.”

This involves capturing large volumes of carbon dioxide (CO2), the main greenhouse gas responsible for global warming, from the atmosphere and storing it in “carbon sinks”, such as the oceans, forests or underground.

Aside from planting and conserving forests, there are several technologies for pumping atmospheric CO2 into the subsoil or under the sea bed. However, little research has been done on them so far, and there are considerable risks.

“We regard carbon capture as a false solution,” Chilean environmentalist Eduardo Giesen, Latin American co- coordinator of the Global Anti-Incinerator Alliance (GAIA) and a member of Chile’s Alliance for Climate Justice, told TerraViva.

“This is no way to resolve the problem. Instead of reducing the amount of carbon dioxide released into the atmosphere, the idea is to bury it, which only postpones the day of reckoning,” he said. Futhermore, the methods are associated with “a high degree of technological uncertainty.”

The agreement on this point will be presented this week to ministers of the states party to the Convention, who are arriving for high-level discussions at the 16th Conference of the Parties to the UNFCCC (COP16), due to conclude Friday Dec. 10.

The first commitment period of the Kyoto Protocol for mandatory greenhouse gas emission reductions expires in 2012. Although that is not far off, the goals have not been met, and humanity has no clear mechanism in sight to deal with a global problem that is likely to be of cataclysmic proportions, according to the scientific community.

But the talks, at least as far as is publicly known, remain bogged down over details.

Another achievement at Cancún was a decision to broaden the mandate of the Least Developed Countries (LDC) Expert Group and extend it by five years. The Group provides technical guidance and advice to LDCs on programmes of mitigation and adaptation to climate change. A total of 45 countries have already presented their plans, and 38 have begun to implement them on the ground.

According to the Secretariat, the process has left “a wealth of capacity and awareness across the countries from political levels down to community levels.”

In Giesen’s view, the groups supporting the Convention are promoting “solutions of a corporate nature.” In general, strategies for adaptation in developing countries offer solutions on an industrial scale, which benefits big companies, he said.

In contrast, “developing world movements are calling for aid to be directed to local communities, to increase the resilience of the most vulnerable populations,” he said.

That demand was expressed at a protest march held Sunday Dec. 5 by Via Campesina, Friends of the Earth International and the Grassroots Global Justice Alliance.

As there are few hopeful expectations for the outcome of the climate conference, Giesen said an acceptable outcome would be agreement on a global fund to combat climate change, “omitting the carbon market component.” Implementation of the fund could be left until the next COP. It would also be a good thing to keep negotiations open for reaching new deals within the framework of the Kyoto Protocol, he said.

The third achievement reported by the U.N. was the decision to strengthen education, training and public awareness on climate change through increased funding for such activities, “and to engage civil society more strongly in national decision-making and the U.N. climate change process.”

Expanding education and participation “is positive, but it should be more focused on solutions at the grassroots level,” Giesen said.

“Citizen participation has always been part of the discourse of the Convention,” but at national as well as international levels it is “rather vague, weak and non-binding,” he said, adding that it would be “fantastic” if the political will existed to expand it.

Lawmakers, for instance, do not have the status of COP participants. The Convention Secretariat does offer them special accreditation, but their situation is still unresolved because not all governments have given the green light.

Legislators can only come to the Cancún meeting if they have been accredited as part of a government delegation, or as “non-governmental organisations.” But “we are not NGOs,” complained Barry Gardiner, a British member of parliament who is also vice president of the Global Legislators Organisation for a Balanced Environment (GLOBE).

GLOBE, whose members include lawmakers from the 16 largest world economies, held a forum Dec. 4-5 in Mexico City with an agenda designed to solve the problems of climate change at the national level, by means of legislation and checks on executive powers. Proposals from the GLOBE forum are to be presented Tuesday to Mexican President Felipe Calderón.

Meanwhile at the climate conference, the president of COP16, Mexican Foreign Minister Patricia Espinosa, said that the pre-agreements achieved “clearly show that countries have come to Cancun to negotiate in good faith.”

But in Gardiner’s view the sum total of progress achieved amounts to “next to nothing.”

We have been ignoring the camels, but straining gnats instead, he told TerraViva.