DHAKA, Dec 31 2010 (IPS) - Poverty remains one of the problems of Bangladesh, but it has made, and continues to make, key progress when it comes to preventing deaths among its children. 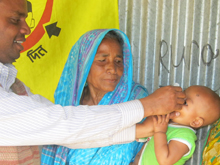 In fact, Bangladesh has become quite a success in lowering its child mortality rate that it is now among the few nations that are poised to reduce this rate by two-thirds, which is the fourth Millennium Development Goal (MDG). And that, say experts, is due in part to the government’s efforts to reach districts so remote that they were often overlooked or forgotten altogether when it came to providing health care.

The MDGs are a set of eight development targets that countries in 2000 committed themselves to meeting by 2015. The goals range from eradicating poverty to improving maternal and child health, to achieving universal primary education and ensuring environmental sustainability.

Just last September, the international organisation Save the Children released a report that praised Bangladesh’s drive to reduce its child mortality rate. It said that from 1993 to 2007, this South Asian country has seen deaths among children under five dropping at a rate of 5.3 percent per year.

The organisation traced this achievement to what it said was Bangladesh’s “equitable” strategy of addressing both rich and poor families, and which combined family planning, gender empowerment, health service strengthening, and an immunisation campaign that especially targeted hard- to-reach districts.

The government’s determination to service the most neglected segment of the population can be gleaned from this comment by Dr Mohammad Amjad Ali Fakir, chief health officer in Mymensingh district: “There is a strong monitoring mechanism. Every child counts and we have records of every birth in the community so there is no scope in missing out on vaccinating children.”

Sixty-year-old Havia Khatun, meanwhile, reflects attitudinal change among ordinary folk because of the campaign, as she remarks while cradling a grandson, “When I was young, I ran away from taking vaccines. But now that we understand the benefits of vaccinating a child, we rarely drop out.”

For years, the programme had managed to reach a measly two percent of the population under five years of age.

But for the past decade or so, Bangladesh has been busy shoring up its EPI in its efforts to achieve its annual target of fully immunising at least 90 percent of all children aged less than one year. In 2008, it also launched the Reach Every District (RED) campaign for EPI, with support from the United Nations Children’s Fund (UNICEF).

As a result, some 9.6 million lives of children less than one year have been saved since 2008 till now. Annually, EPI is said to be preventing as much as 3.2 million deaths among children in this age range.

Access to vaccines has reportedly reached 98 percent of local populations, including those living in rough, hilly terrains. And while the average national FIC coverage remains at 72 percent, observers say this is still far better than figures posted by other developing countries, among them neighbouring Sri Lanka, India, and Nepal.

Bangladesh has been polio-free since November 2006. Recently, it held its biggest measles vaccination campaign yet, with 35 million children receiving their ‘measles catch-up’ shot.

Key to the RED campaign are the health assistants who regularly visit so- called hard-to-reach areas. In Mymensingh district alone — some 145 kilometres north of Dhaka — there are 440 such places.

At present, there are 26,000 health assistants and an equal number of family welfare assistants (FWAs) who make sure community records are up to date. They also organise routine vaccination sessions every month in their assigned areas so that there are minimal ‘dropouts’.

It’s not an easy job. “It is very difficult to reach all the families at a time because many of the areas are in remote locations like in ‘chars’ or dried riverbeds where there are no roads,” says H A Mohammad Harunor Rashid.

“It may look like plain land,” he says, “but there are places that are so remote that even motorbikes (that we are provided with) cannot reach.”

“In absence of HAs and FWAs,” says Alam, “for many years we could not hold routine vaccination programmes (in the remote areas). Because of difficult terrains, many parents otherwise could not even reach fixed immunisation sites in the nearest immunisation centres.”

Some districts have even experienced a drop in coverage because of a shortage in these health workers. But the government has been quick to respond to the problem.

Dr A B M. Jahangir Alam, head of Bangladesh’s vaccination and primary healthcare programmes, says over 13,000 health assistants and FWAs have been recruited to fill up vacant posts in many of the low-performing districts.

“The low performance is only temporary,” he adds. “But what is amazing to learn is that EPI is no longer considered a state-owned programme. It is now the people’s programme.”

“It would be a shame to miss a dose of vaccine for my child, ” says Anohadi villager Sabina Aktar, 28. “No one in our village ever missed vaccinating their child as we are highly sensitive to benefits of vaccines.”