ABIDJAN, Jan 19 2011 (IPS) - Even while the country has faced civil war and political crisis, innovative research organisations have worked to meet the challenges of food security and rural poverty. 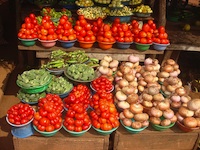 Côte d’Ivoire’s domestic production of vegetables meets less than 60 percent of consumers’ needs. Growers could make up the deficit – and increase their year-round incomes – by adopting new techniques that produce several harvests each year.

On his low-lying half-hectare of land, not far from Abidjan, François Adou usually grows cabbage, aubergine, potatoes, tomatoes and groundnuts on mounds. A year ago, the 43-year-old dug trenches in an 800 square metre section to devote it exclusively to a new technique for growing tomatoes.

The non-soil, or hydroponic, technique is being promoted by an independent organisation working on alleviating poverty in rural areas, the Agribusiness and Contract Farming House (known in French as GenieAgro). Farmers plant tomatoes or other crops in a substrate made up of cocoa hull fibres, sawdust and industrial waste of plant origin.

This mixture can be used to fill plastic-lined trenches, wooden boxes, or sacks supported above the ground on wooden trestles. The plants grow directly in this material.

“It’s a soil-less cultivation technique,” Adou told IPS, adding that the results have been great. In the first three-month planting cycle – March to May – he harvested between four and five tonnes of tomatoes. In August, he was already preparing for another harvest – this time anticipating six tonnes.

A kilo of tomatoes fetches between $1 and $1.25 in Côte d’Ivoire. On an initial investment of a million CFA francs (roughly $2000 dollars) to buy the substrate in which to grow the plants, he saw a return of $5,500 from the sale of his first harvest alone.

After Adou’s second harvest last August, his neighbour Amidou Traoré had seen enough. He followed Adou’s lead and set up with the hydroponic technique on 600 square metres of his own. “I pulled in 962,500 FCFA [almost $2,000 with my first harvest]. Half went to pay back part of the investment of 850,000 FCFA ($1,700).”

Converting discarded material from cocoa and coffee processing, as well as wood chips and sawdust means manufacture of the substrate that the plants grow in dovetails neatly with a problem of disposal of industrial waste.

Simplice Kouassi, a researcher and geneticist who before he joined GenieAgro worked at the country’s National Centre for Agronomic Research, explains that farmers working with hydroponic techniques can reap four or five times as many tomatoes than they would planting directly in the soil.

“For an area of 1,000 square metres, you need to invest three million FCFA (around $6,100 dollars). It’s possible to recover the investment in your first three months,” he told IPS. “Each growing cycle runs three months, and each time, a farmer can put 1.19 million FCFA ($2,500) in her pocket.”

Farmers have no need for chemical fertilisers, if they use the substrate produced by the facility GenieAgro set up for the purpose. The Bureau de Formulation de Substrats produces a mixture that contains all the nutrients growing plants need. A batch of substrate can be re-used two or three times before it has to be replaced.

Presently, the factory, based at Songon, southeast of Abidjan, produces only 200 bags of substrate a day. Some of the raw materials needed are often in short supply.

In recent years, the production of tomatoes in Côte d’Ivoire has fallen by more than 50 percent, from 320,000 tonnes to 150,000 tonnes, according to producers groups. This decline is primarily all due to bacterial ring rot (a plant disease). Additional factors include the late arrival of the rainy season and strong competition from tomatoes imported from Burkina Faso, Mali and Europe.

“There was a real threat to the local production of tomatoes which demanded that we find a response quickly… [useful] in the south. Because the north [of the country] remains attached to the traditional cultivation on the earth or still relies on irrigated farming that is very productive,” Antoine N’Guetta, an agricultural engineer, explained to IPS.

Non-soil cultivation of tomatoes has been adopted by nearly 200 of the countries 3,000-odd producers since 2009. The country’s tomato production has rebounded sharply to 225,000 tonnes in 2010.

This highly-productive, labour-intensive farming technique holds great promise for farmers in Côte d’Ivoire and beyond.