JUBA Southern Sudan, Jan 5 2011 (IPS) - “We want an independent country of our own that is Southern Sudan, and we want a new country”. Calm and with a passion in his voice, the secondary school teacher, John Kiri, a native from Juba explained the excitement he is feeling for Sunday’ referendum. 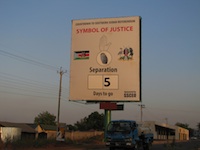 Kiri said he has been dreaming of the day that he can cast his ballot and thus ensuring a better life for him and his family.

The long-awaited self-determination referendum is but a few days away. The referendum, a key milestone, is the last stage of the implementation of Sudan’s 2005 Comprehensive Peace Agreement (CPA), which ended the war between Southern Sudan and Northern Sudan. This was the longest civil war in Africa.

“I think that there are a lot of challenges ahead of us and so we have to be prepared, because the north will be posing threats to us from time to time even if we secede”, added Kiri.

According to analysts 2.5 million people were killed during the 21-year- civil war. The CPA granted Sudan a six-year interim period in which the people of Southern Sudan would assess whether the parties to the CPA – the ruling National Congress Party (NCP) and its southern counterpart, the Sudan People’s Liberation Movement (SPLM) – have made unity attractive to the people of Southern Sudan.

There are two options enshrined in the referendum protocol – Southern Sudan would vote to either confirm the unity of Sudan, the system of government and the interim national constitution established under the CPA or vote for secession and declare an independent and sovereign state.

As the referendum approaches, the general opinion is that southern Sudanese will vote for independence.

“The total number of people registered in the south, in the eight countries abroad and in the states of northern Sudan is 3,930,916,” said Chan Reek Madut, a member of the referendum’s organising commission.

A leader of Internally Displaced Persons (IDPs) community from Southern Sudan living in one of the informal settlement on the outskirts of Khartoum city, Demin Mauro Demin said, “I am very excited indeed because the self- determination referendum is almost at hand. He added that he has “suffered so much and wants to prepare for the dawn of a new country.”

The Center will deploy more than 100 observers across Sudan and overseas voting locations to assess the referendum process and observe polling, counting, and tabulation.

“The referendum is a critical step in the implementation of the Comprehensive Peace Agreement,” said former President Carter. “We hope this process will help the people of Sudan work for a peaceful future, regardless of the outcome.”

“It is important for all political leaders to honour their commitments to sustainable peace in Sudan as set out in the Comprehensive Peace Agreement,” said Annan.

The Center said they are encouraged that the governments of Sudan and Southern Sudan have committed themselves to a peaceful conduct of the process, acceptance of credible referendum results, and respect for the rights of all Sudanese citizens, whether the Southern Sudanese vote for unity or separation.

“If Southern Sudanese vote for secession, we will tell them, “Congratulations, build your country, take good care of it, and if you are in need of any support, we are ready to help you”, stated Sudanese President Omar Al-Bashir last week.

Bashir reiterated the sentiment in his speech at the commemoration of the 55th anniversary of Sudan’s independence on the 1st of January. He said his government is still working for unity, but if southerners opted for secession, he will be would be the first person to recognise the independent Southern Sudan.

When President Bashir arrived in Juba earlier this week, on an official visit, he “declared that his government (the National Unity Government) would accept and support the south whatever the result of the plebiscite may be”.

“Whatever the results of the referendum, the painful process and the deep pain that would be, we can by pass this stage by our patience, tolerance and by highly welcoming the referendum results with in good sprit.”

Juba resident John Bosco summed up the mood in the south, ” As the referendum day approaches, we are more than ready for it. We are just waiting for the remaining days so we go to vote. We are all aiming at one thing that is want to separate from the north and form a country of own.”