MAURITIUS: Renewable Energy Gets a Boost

PORT-LOUIS, Jan 15 2011 (IPS) - A new initiative to support production of renewable energy in Mauritius may provide a model for other countries to follow suit. 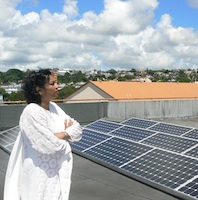 Andrea Gungadin on the roof with her solar panels. Credit: Nasseem Ackburally/IPS

“We have got so much sunshine here,” says Andrea Gungadin, rector of the Hindu Girls College, a private educational institution in Curepipe, southern Mauritius. “Why allow it to go waste when we can use it to produce electricity at a time when fossil fuel is becoming scarcer and more expensive?”

The college, which has 1,400 students, is producing 14 KWh of clean electricity daily from a three kilowatt solar system mounted on its roof. This represents about a fifth of the school’s energy needs.

“We are transforming Mauritius into a sustainable island and making it into a model of ecological sustainability,” he says.

The Hindu Girls College solar array of 17 panels cost around $4,600 but engineer Pavitra Maulloo explains that the cost will vary depending on factors like the location of the site, the number of panels desired, the structure itself and access to the site.

“Investments in such a project can be covered within a five year period for an office or institution and in seven to eight years for a home. Afterwards, you just produce, use and sell your electricity for 20 years,” he says.

The Grid Code, produced by the Central Electricity Board (CEB), establishes the standards of performance, reliability and safety for the planning and operation of the power system in which clients can produce electricity from photovoltaic, wind or hydrological sources for their own use and sell any surplus to the national network.

The code is restricted to plants up to a maximum capacity of 50 kilowatts and the total installed capacity is for now limited to a maximum of 200 plants island-wide.

"We are experimenting on this project. We cannot just open the grid to thousands of small producers and then get stuck with inexperienced people," a officer from the CEB said.

Pavitra Maulloo, a project engineer, says no major modifications to existing wiring is needed to sell electricity to the CEB: "Just a good insulation system, a two-way power meter to read the import and export of electricity and make sure all the connections are up to the norms."

The Board will buy the production at rates that will vary from 30 to 83 U.S. cents per KWh.


Public schools are following in the footsteps of the Hindu Girls College. The Education Ministry has opened bidding for the installation of solar panels on ten of the island’s primary and secondary institutions.

A total generating capacity of 55,000 KW will be produced under this project for use by the schools. During vacations, the electricity produced will be sold to the CEB.

The code permitting clients to feed power into the national grid is also attracting sugar farmers who are dealing with a decline in prices for sugar. Thousands of hectares of sugar plantation land has been abandoned, but farmers are now inviting small wind energy producers to set up windmills here.

“They would like to derive some revenue compensating for the loss in sugar prices, as well as continue producing in some vegetables and fruits for the local market on the land around the wind farms”, Nundlall Basant Roi, chairperson of the Mauritius Cooperative Agricultural Federation told IPS.

The idea is at a preliminary stage, with uncertainty over how much additional income such wind farms could produce.

Mauritius consumes around 350 MWh of electricity daily. The island presently depends mainly on imported oil and coal to meet its energy requirements, with only about 18 percent produced from renewable energy sources, including bagasse (sugar cane residue), hydro, solar and wind energy.

The Central Electricity Board projects the island will need about 400 MWh each day by 2025, and it aims to produce 60 percent of its needs from renewable sources.

The government’s vision of a sustainable island has found a ready audience. At Vacoas, in the centre of the island, Deven Maulloo has installed four photovoltaic panels that provide electricity to his home; he does not sell anything to the CEB, but has shaved about $75 off his monthly bill, but he admits his solar system is not ideal.

“We have to change our way of living and adjust it to the solar regime. We thus do all our household tasks that need electricity during the day,” he says.

The Grid Code is an important step to promote the adoption of small-scale renewable generation by individual consumers. The cost of investment in renewable energy is high, and the possibility of selling a surplus helps attract more participants.

Gungadin says her school would not have considered this project if there was no option to sell the surplus to the CEB, but she sees it as having numerous benefits.

“It’s not just like producing electricity and earning some money. It is also a way to teach our students about climate change, electricity production from fossil fuel and why we need to produce it from renewable sources,” says Gungadin.

Both Gungadin and Deven Maulloo insist that solar energy is cost-effective in the long run.