EL-ARISH, Feb 24 2011 (IPS) - Abu Mustafa Al Matriah and Abu Ahmed Abu Amrah, both Bedouins in Northern Sinai are thankful to the army that they can complete their daily deliveries without having “to pay so much baksheesh” (gratuity). 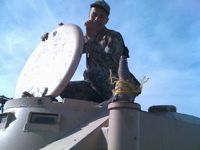 An Egyptian soldier relaxes on his tank in Sinai. Credit: Mohammed Omer

Now that the Mubarak regime is gone both friends can sit in a café, sip coffee and “discuss politics” critically, for the first time in decades – something which was a dangerous pastime in the Northern Sinai before. They can discuss corruption and “who’s blackmailing the population by asking for a cut of money for everything, including getting official documents” from government buildings faster.

“If you don’t pay, things don’t get done” says Al Matriah, a father of seven who has worked transporting sand from the desert to construction sites for the last 30 years. He remembers when he had to tip a police officer 50 Egyptian pounds to ignore a simple mistake he made driving a sand truck in Sinai. “He wouldn’t issue me a ticket, he just kept me waiting, as blackmail, until I paid him cash,” says Al Matriah.

Now, there is a noticeable absence of police. “They are not here anymore, they’ve gone,” Al Matriah laughs says.

There is no state security or police presence across Sinai – Egyptian troops are the only ones in control.

IPS counted all the checkpoints from Rafah to Cairo – 19 Army roadblocks check cars and identity of individuals, over the 400 kilometers. An Egyptian security official told IPS that the number of checkpoints had been reduced from 40 to 19.

Bedouin, who used to quarrel with police, cooperate now – opening their cars, allowing the Army to do their job.

Sipping coffee and thinking about Egypt’s future, Abu Matriah says, “we need economic security – similar to the days of [former Egyptian president] Abdel Nasser when a cup of coffee was a quarter of an Egyptian pound instead of 2 Egyptian pounds it is today. Or when you could buy 1 kilo of sugar for 1.5 EP’s, instead of 5 EP’s.”

“Without connections and tips,” we had no way to get our son employed, said Abu Amrah. Unemployment is a big problem for Egyptian graduates, but for Bedouin youth, this is how the system discriminated against them.

After President Mubarak stepped down, vice president Omar Suleiman announced that the higher council of Armed Forces would take charge of Egypt’s affairs during the transition period.

That decision seems to have been a good one, especially for the Bedouins, who respect the army for being more honest and less prone to corruption and harassment.

Everyone seems to agree that the security situation is much better in Sinai today, and Bedouins are able to express their views without fear of being arrested. Previously, many of the Bedouin youth and online activists were wary of using online blogging to exchange views about their political, economic, educational problems, fearing harassment and arrest by the Egyptian government.

Sinai novelist Mos’ad Abu Fagar experienced harassment while running a blog called Wedna N’ish (We Want to Live), on which he describes the life and hardships of the Bedouins in Sinai – including the citizenship rights they often seek. In 2007, he was arrested at El-Arish police station for his blog.

Amnesty International and The Committee to Protect Journalists condemned the 30-month imprisonment of Fagar – he was released in July 2010. The torture Fagar had to endure while detained made other online-activists very cautious about using their real identities.

Fagar says, “the regime did not treat the Bedouins well and did not have enough wisdom, or experience, to contain the Bedouins either.”

Abdelhadi Abu Hujazzi looks to the Egyptian Army as the best model in the world. “There is no way they will blackmail people,” Abu Hujazzi says. “They are good nationals of this land and very sincere – no tips after today.”

The same respect doesn’t apply to the Egyptian Air Force according to Abdelhadi, whose friend Mohammed Al Hamidah had to ask his father to pay 40,000 Egyptian pounds just to enroll in aviation school. “These are not fees; this is corruption. The way the old regime works,” says Abu Hujazzi.

The population here is aware that the Army presence may be short-lived and they fear the old corruption returning. Abu Hujazzi says, “It’s an old era – and its over, even inside us.”

Abu Hujazzi knows that the Army cannot continue to administrate the country for long. He says that their fairness is “a great success for the revolution.” But the idea of fair elections remains a strange one, for him and many more. “Living for 30 years with one regime, makes me feel uncertain of what elections are really all about. We need new faces to draw a new map of the new way forward for Egypt and all Egyptians,” Abu Hujazzi says.

“Whatever comes in the coming months will not be worse than Mubarak,” Abu Hujazzi says.

“At least, Abdel Nasser died without billions of dollars of Egypt’s money in his account,” says Matariah.

“We do not need Obama to help us end the injustice; the Arab States will learn democracy their own way,” says Abu Hujazzi. “Yesterday it was Tunisia, today Egypt, and tomorrow Libya and the rest of the corrupted regimes.”

Abu Hujazzi hopes that sometime next year Arab leaders “which will come by our votes” will have the opportunity to meet to get “to know each other.”