LONDON, Apr 8 2011 - As Côte d’Ivoire’s bloody leadership contest draws to a close and the surrender of Laurent Gbagbo, the incumbent president, seems imminent, a long list of atrocities and electoral irregularities mark the records of both him and his opponent, Alassane Ouattara. 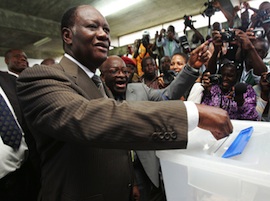 Alassane Ouattara casts his vote in the second round of presidential elections in November 2010. Credit: Basile Zoma/UN Photo

But with 1,500 people reported dead and more than 200,000 displaced, can one stubborn man be held solely responsible for the human cost of this four-month long dispute?

Ethan Zuckerman, the founder and editor of Global Voices, believes the situation is more complex than a one-man blame game.

“The challenge with the situation in Ivory Coast is that neither side has clean hands. Forces working for both have committed atrocities and, unfortunately, it’s very hard to see how any resolution to the conflict will avoid further bloodshed, as both sides seek to settle scores.”

While Gbagbo’s behaviour deserves no defence, the role of the media and key figures in shaping the discourse of international diplomacy by casting Ouattara as the good guy and Gbagbo as the bad guy does raise uncomfortable questions about how support (and disdain) for political figures is manufactured on the world stage.

Offering some insight into the dilemmas of casting political figures in the mould of the good/bad oppositional binary, Zuckerman says: “The narrative of Gbagbo as the bad guy who won’t give up and Ouattara as the good guy with international backing and an electoral victory isn’t terribly far off base. It does, however, oversimplify and makes it harder to see crimes committed by Ouattara’s forces with the same clarity as we see those committed by Gbagbo’s.”

Although the few media organisations that have not ignored the crisis have consistently reported the violence from day one, there has been little interrogation of Ouattara and his rebel forces in the same forensic manner as critiques on Gbagbo and his Young Patriots. Both sides have burnt and butchered hundreds of non-combatants. And both sides have, at different times, rejected African Union (AU) efforts at mediation.

Before the massacres in Duékoué, which shifted international opinion on Ouattara’s forces, the greater violence was rightly attributed to Gbagbo. But the atrocities committed by pro-Ouattara forces have not received the same attention as those committed by pro-Gbagbo troops.

Compare the wide coverage of the fatal shooting of six women protesters in Abidjan on Mar. 6, with the minimal reports of violence in Attecoube, a suburb of Abidjan, or the displacement of 700 people in the village of Anokua-Koute by pro-Ouattara forces, a few days later.

Zuckerman cites the lack of attention to the Ivorian crisis as one of the main reasons for the absence of critical perspective.

“It’s unfortunate for the Ivory Coast that there’s been so many other high profile international stories demanding attention, from the Arab Spring revolutions and protests to the tragedies in Japan. It’s possible that, if Ivory Coast were the major international story unfolding, we might have gotten more subtlety in reporting,” he says.

As more details emerge about the massacres in Duékoué and elsewhere, about the atrocities committed in the struggle for Côte d’Ivoire, the international community finds itself in a difficult position. As Salon asked of U.S. Republican Senator James Inhofe’s “backing [of] a brutal despot,” it must be asked: Will the international community, led by the U.N. and France, continue to support a man implicated in such gross violations?

Daniel Balint-Kurti, a researcher and campaigner at Global Witness, suggests that global endorsement hinges on what happens in the future. “A lot will depend on Ouattara’s reaction to investigation. If he takes responsibility for atrocities committed, it will be much easier for him to benefit from the huge international support he’s gotten, but if he doesn’t it will be problematic.”

For now, the tone of diplomacy seems to be one of lamentation and regret, rather than condemnation. Ban Ki-moon, the U.N. secretary-general, responded with “concern and surprise” to the news of mass killings in western Côte d’Ivoire, while Hillary Clinton, the U.S. secretary of state, was “deeply concerned” and Jean Ping, the chairman of the AU, has urged both sides to “show restraint and protect civilians”.

By contrast, after the shooting of six women protesters by pro-Gbagbo forces, the world upped the ante in a united call for the incumbent to “step down immediately”. Even after allegations of pro-Ouattara fighters massacring 800 civilians were made, on Monday, Apr. 4, Yousouffou Bamba, Côte d’Ivoire’s ambassador to the U.N., said: “Mr Gbagbo is a shame on Africa. He is a dictator, he is killing his own people.” Nothing on our guy, the good guy, Ouattara.

That his name as genocidaire does not appear on a Google search while ‘Gbagbo genocide’ is a pre-figured search phrase, may seem superficial, but it is nonetheless an indicator that, thankfully, the world will not play the same trial by media game with Ouattara. That will be a post-conflict task for the International Criminal Court (ICC).

At that point journalists may have to work backwards filling in the blanks that were missed when the world’s cameras were focused on revolutions in the Arab world and events elsewhere.

Not that Sanaa, Benghazi or Fukushima did not deserve attention, they most certainly did. But Côte d’Ivoire also needed the likes of Anderson Cooper to fulfill his Twitter promise on Feb. 26, that on “Monday [he’d] try to do something”.

A pound of flesh

For now, a defence of Ouattara may be that the massacres in Duékoué were largely carried out by traditional hunters known as dozos, an independent militia acting in Ouattara’s name. Therefore, neither he nor Guilliame Soro can be held responsible.

But the fact that Ouattara and Soro, as minister of defence and prime minister in-waiting, are leading this offensive means they are accountable and have a duty to reprimand the perpetrators. When Ouattara’s hour of triumph finally comes to pass, what will the dozos and little militias within the FRCI (Republican Force of Ivory Coast), demand in return for their support? Immunity? Money? Power? Cocoa beans?

Aware of the tough road that lies ahead for Ouattara, TIME magazine’s Monica Mark, based in Abidjan thinks, “it’s going to be unstable for quite a while”.

“He [Ouattara] needs to address the issue of national reconciliation. That will be difficult because he relied on rebel forces so now he owes them. And these people, they don’t do things the proper way … he’s going to have a low-level insurgency on his hands as the leader,” Mark says.

Echoing similar sentiments, Balint-Kurti explains: “He’s going to have a hell of a job. The country is very divided and he [Ouattara] is hated in parts [of the country] and he’s not just going to take the presidency and everything is going to be okay.”

In Ouattara’s final transition from his luxury suite at the Hotel du Golf to the presidential palace, it is sincerely hoped that he can unite the country and restore peace. However, hard questions will need to be asked of him by seekers of truth and justice.

Despite the efforts by the media and international community to produce a clear-cut good guy, bad guy narrative for easy mass consumption, countless disturbing images and stories of violence perpetrated by rebel and patriot forces, show there are no clear lines distinguishing the righteous from the heathens. In war, all are sinners, even the guys with major international support.