GUAYARAMERÍN, Bolivia, May 4 2011 (IPS) - Arturo Sánchez, 72 years old and nearly blind, dreams of bringing ecotourism to Cachuela Esperanza, a Bolivian town of 1,336 people on the Beni river, and hopes the construction of a huge hydroelectric dam will give a boost to his dreams. 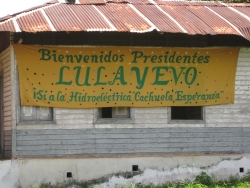 Fourteen years living in Brazil, where he worked as a skilled quality control technician in the automobile and steel industries on the outskirts of São Paulo, and seven years as a head cook in the United States make him an unusual resident of this small town in this isolated corner of the Amazon jungle in northern Bolivia, which is caught up in the controversy over plans for a large hydropower plant.

“I have been living in this historical town for 17 years,” he says. He ended up here when he went broke after failing to find gold in the Beni River, near the border between Bolivia and Brazil. Now he is trying to turn an old store into a restaurant. “I’m a good cook,” he says, mentioning his years in the United States.

Hotels, eateries and hiking trails through the still-preserved rainforest around the town form part of the ecotourism project that a local group headed by Sánchez is keen on pushing forward. To do so, they are hoping for aid from the Netherlands, which they are now negotiating, or from some other source.

A church built on a rock, a theatre and other buildings that stand out for their size and stateliness – such as an abandoned hospital that in 1920 was considered one of the most modern in Latin America – are features of this town wedged between the river and the jungle, a product of the rubber boom of the late 19th and early 20th centuries.

The town is located at the Cachuela Esperanza rapids on the Beni river, 30 km before it joins the Mamoré river to form the Madeira river, which is part of the border between Bolivia and Brazil.

The town, still only accessible by dirt road, was built next to the rapids thanks to the enthusiasm of Nicolás Suárez, a Bolivian rubber baron who lost a boatload of rubber to the rapids in 1882, fell in love with the natural beauty of the place, and stayed.

But Cachuela Esperanza began to decline in the 1920s, due to competition from Malaysia and later the substitution of synthetic rubber.

For local residents, the projected construction of the hydropower dam represents an opportunity to revive the town from its decline, which was aggravated by the downturn in mining on the Beni river. The local people live in poverty, surviving by harvesting Brazil nuts, fishing and engaging in subsistence farming.

The community only has electricity from 4:00 PM to midnight, because the old thermal generator is on its last legs, deputy mayor Shisley Martínez says.

The engine “is so old it needs a gerontologist” rather than a repairman, Martínez’ husband Aníbal Domínguez jokes.

But they say the solution will come as soon as the dam begins to be built, since the project requires electrical power from the very start. The new generator will also supply the local residents, the deputy mayor hopes.

“Seeing the dam built is the dream I have had since I was a boy,” says fisherman Juan Barba Jiménez, who has lived here for 60 years. It is a dream shared with all of the townspeople, he says. The energy will draw industries and other investment in local development, he argues.

But the impacts of the project will be disastrous, say environmentalists and researchers. The reservoir will flood 690 square kilometres of land, to generate 990 MW of power, according to the feasibility study carried out by Canadian consultancy Tecsult, commissioned by the Bolivian government of leftwing President Evo Morales.

That compares negatively to San Antonio and Jirau, two hydroelectric plants that Brazil is building on the Madeira river. These two dams together will generate 6.5 times more energy than Cachuela Esperanza, while flooding a combined area that would be 23 percent smaller, just 529 square kilometres, says engineer Walter Justiniano, an independent consultant to Bolivia’s Ministry of the Environment and Water.

Furthermore, Cachuela Esperanza will only be viable if nearly all of the energy generated is exported, since the Bolivian market that it could supply in the northern jungle provinces of Beni and Pando need less than 20 MW of electricity – just two percent of the dam’s hydropower potential, Tecsult reported.

Since the financing and construction will likely come from Brazil, Bolivia would be giving up its energy sovereignty, as Paraguay did in the case of the Itaipú dam, the enormous plant built by Brazil in 1984 on the border between those two countries, says Justiniano, who lives in Guayaramerín, a city 44 km from Cachuela Esperanza that is keen on receiving energy supplies from the proposed hydroelectric plant.

Although it is difficult to justify from the point of view of Bolivia’s energy needs, the dam might benefit Brazil’s hydroelectric plants, Justiniano suspects, because it would contain the sediment in the Beni river before flowing into the Madeira river, thus acting as a filter that would prolong the useful life of the Jirau and San Antonio dams.

Insufficient studies have been carried out on sedimentation in the Beni river, according to engineer Dunia Luján, who coordinated a strategic environmental impact assessment for the Bolivian government on the Madeira river basin. But the Beni is considered the river that produces the most sediment.

What Amengol Caballero, director of the northern regional office of the Centre for the Research and Advancement of Small Farmers (CIPCA), fears is the aggravation of flooding during heavy rains as a result of the four projected dams in the basin.

Besides the Cachuela Esperanza, San Antonio and Jirau dams, Brazil plans to build a fourth dam, Ribeirão, on the Madeira river where it forms part of the border, with a potential of 3,000 MW.

Since 2005, heavy flooding has become frequent in northern Bolivia, blamed on the El Niño and La Niña effects – periodic temperature fluctuations in the Pacific Ocean that cause economic and environmental damages in countries around the world.

In Guayaramerín, for example, streets and plazas near the Mamoré river have been flooded.

With so many dams in the basin, the tragedies will increase, Caballero warned in an Apr. 16 meeting with reporters from the Bolivian cities of Guayaramerín and Riberalta, who were joined by local residents from Cachuela Esperanza.

The climate has changed in northern Bolivia, where rainfall is heavier during a shorter rainy season, and the dry season is longer, he explained to IPS.

The possibility that the town will disappear under the water has been ruled out; President Morales “promised that the hydroelectric plant will not be built if it affects any part of Cachuela,” said a former deputy mayor of the town, Vicente Ferreira.

But that means the river would have to be dammed a certain distance upstream, without taking advantage of the rapids, which raises questions about a possible loss of power potential.

“We trust Evo,” the only Bolivian president who has ever visited Cachuela (in 2008), said Sánchez.

But the current deputy mayor took a more careful tone: “We don’t want to cause harm to others,” she said.