DEVELOPMENT: Investment, Not Charity for LDCs

ISTANBUL, May 9 2011 (IPS) - Least Developed Countries do not need charity; they want more and smarter investments. This is the point of departure for the Fourth U.N. Conference for the world’s poor countries (LDC-IV) begins in Istanbul, Turkey. 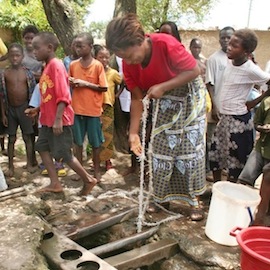 Up to 8,000 delegates, including the leaders of the world’s 48 least developed countries (LDCs), international aid agencies and development partners are discussiong solutions to abject poverty.

Up to 900 million people are citizens of LDCs, half of them living on less than two dollars a day. Over the last decade, 60 percent of the world’s refugees originated from the LDCs, according to the United Nations.

At the opening of the conference, U.N. Secretary General Ban Ki-Moon pleaded with wealthy countries and the development agencies to change their outlook on LDCs. He said it is a moral obligation to relieve the world’s most vulnerable people of the burdens of poverty, hunger and needless disease.

“Investing in LDCs can provide the stimulus that will help to propel and sustain global economic recovery and stability. This is sound business,” said Ban.

Investment in agriculture has been singled out as one of the key elements to help LDCs’ address food security and adequate nutrition.

Across the world’s poorest countries, the agriculture sector has been neglected for many years, according to a report titled “A World without LDCs”, launched by the civil society forum in Istanbul on May 8.

“Lack of investment in strengthening the sector has been exacerbated by insecure land tenure, lack of access to finance and poor transport and other infrastructure,” stated the report.

The report argues that many developed countries have heavily subsidised their farmers and dumped food in the South through international supply chains in the form of food aid. “As a result, many LDCs have become net food importers and have been unable to benefit from the recent rise in prices of food commodities,” the report said.

Rising food prices have pushed 44 million more people into poverty in the ten months since June 2010, according to the World Bank.

The director general of the World Trade Organization (WTO), Pascal Lamy, is in agreement with the civil society concerns that the reduction and elimination of subsidies in the developed world are key to building agricultural production in the LDCs.

Lamy is also concerned that LDCs are being shortchanged in the world economy – these 48 countries together account for only one percent of world trade.

“In other words, the contribution of international trade to the development of the LDCs remains inadequate,” Lamy told the conference. He said the world should provide LDCs with better market access.

Lamy concurred with the UN secretary general on LDCs holding investment potential. He said the there remains significant untapped potential in the poor countries. “There are a number of vital issues specifically concerning the rules governing LDC trade that require urgent decisions. I sincerely hope that this conference will help to make this come about,” said Lamy.

World Bank Managing Director Ngozi Okonjo-Iweala suggested a focal point for the conference deliberations. “We need to focus on building the comparative advantage of countries and attracting foreign direct investment to support manufacturing, scaling up what we know works, and designing safety net programs to protect the poor and vulnerable,” she said.

Meanwhile the LDCs themselves are setting ambitious targets for the next decade: the aim is to graduate half of the present least developed countries from this status in the next decade, according to the current chair of the Global Coordination Bureau of LDCs, the Prime Minister of Nepal, Jhala Nath Khanal.

The number of the LDCs has grown from 25 in 1971 to 48 at present; only three countries – Botswana, Cape Verde and Maldives – have managed to graduate since the category of LDCs was created in 1971.

Khanal said the vision for LDCs is to create inclusive and sustained economic growth, eradicate poverty and build strong and resilient society.

“This will be possible only with a strong productive capacity and economic infrastructure to fuel a rapid and inclusive growth in LDCs, said Khanal.

LDCs are demanding additional resources to invest in productive sectors, the development of the private sector and increased official development assistance from the Rich World. They also want the removal of tariff and non-tariff barriers, and meaningful market access for all LDC products, trade capacity enhancement, support for the transfer of technology to LDCs, and supportive measures to promote investment through aid for investment.

“The international community and global architecture should be responsive to the constraints of and opportunities for LDCs,” said the Nepali prime minister. “The voice and representation of LDCs should be ensured in all international forums for their effective mainstreaming into the global governance processes.”