INDIA: Women Hold Their Own in Provinces

NEW DELHI, May 16 2011 (IPS) - Provincial elections in four major Indian states have produced two female chief ministers, proving women capable of holding their own in the rough and tumble of politics in this deeply patriarchal country. 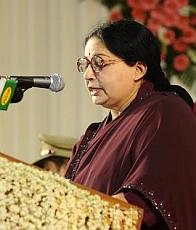 Jayalalithaa being sworn in for a third term as chief minister of Tamil Nadu state. Credit: AIADMK

Elections held in the eastern states of Assam and West Bengal and in southern Kerala and Tamil Nadu have paved the way for Mamata Banerjee to be sworn in as chief minister of West Bengal and Jayaraman Jayalalithaa of Tamil Nadu this week.

“Banerjee’s election is especially remarkable because she never depended on the support of a male relative or associate through a long political career that has culminated in her realising an ambition to become chief minister of West Bengal,” said Ranjana Kumari, head of the Women’s Power Connect lobby.

The odds were stacked against the non-political lower middle-class Banerjee, when she decided to take on the formidable Marxist-led leftist coalition that has ruled West Bengal for the last 34 years.

A former member of the national Congress party, Banerjee broke away to form the regional Trinamul (grassroots) Congress party, which took on the organised cadres of the Communist Party of India-Marxist to finally emerge victorious in the current elections.

Kumari told IPS that Banerjee’s victory would send out a message that courage of conviction, as much as male patronage, can open doors in Indian politics for serious-minded women aspirants. “This is becoming more perceptible with each election,” she said.

But in spite of such successes at the provincial level, women have yet to achieve victory in Parliament, where a bill reserving 33 percent of seats in state and central legislatures for female politicians has been pending since 1996.

While the Rajya Sabha (upper house) has passed the “women’s quota bill” in March 2010, there appears to be a lack of consensus in the Lok Sabha (lower house), where it has been opposed by male legislators loathe to vacate about 180 seats in the 545-member house.

“Male members have resorted to every ruse, including filibustering and plain rowdyism, over the last two decades to stop the passage of the women’s quota bill in the Lok Sabha,” said Annie Raja, general secretary of the National Federation of Indian Women that is affiliated with the Communist Party of India.

Raja told IPS that what is sorely needed is for men to accept women as equals. “Only then will such evils as dowry deaths, female foeticide and honour killings disappear.

“We are now pinning hopes on the fact that many countries, including a few in India’s neighbourhood such as Pakistan, Afghanistan, Nepal and Bangladesh, have accepted the idea of reserved seats in legislatures for women,” said Raja. “Maybe India’s male politicians will be shamed into letting the bill through.”

Although constitutionally secular, India is dominated by Hinduism, and to a lesser extent Islam, religions that demand a secondary role for women in private life and none at all in public.

India’s most powerful politician, Sonia Gandhi, owes much to the fact that she is married into the dynastic Nehru-Gandhi family that has shaped India’s fortunes since well before independence from colonial rule in 1947. Her mother-in-law, Indira, and her husband, Rajiv, were both prime ministers.

However, it was on her own steam that Gandhi revived the Congress party, debilitated by regional, communal and fundamentalist politics while she took a seven-year retreat to mourn the 1991 assassination of Rajiv by Sri Lankan Tamil militants.

Similarly, Sushma Swaraj, leader of the opposition in the Lok Sabha or lower house, received only initial support and encouragement from her politician husband Swaraj Kaushal. She learned, on the wing, to cope with patriarchal attitudes in the right wing, pro-Hindu, Bharatiya Janata party.

Still, it is in the provinces that women are showing their political mettle. The chief minister of India’s biggest state, Uttar Pradesh, is Mayawati, who rules almost 200 million people through an informal coalition that includes Brahmins from the uppermost rung of the caste ladder.

Although groomed for the job by the founder of her Bahujan Samaj Party (BSP), once Mayawati learned the ropes, she had little difficulty outmanoeuvring the leaders of caste and religious groups and forging unlikely but winning combinations that have seen her on and off in power since 1995.

The BSP professes to champion the cause of the Dalits (the broken), people at the bottom of the Hindu caste hierarchy and once considered untouchable.

Jayalalithaa, who is taking over the reins of Tamil Nadu for a third five-year stint, is seen as another woman leader who has mastered the art of stepping around India’s caste minefield. Although a Brahmin, the highest among India’s castes, she has been repeatedly elected in a state dominated for decades by anti-Brahmin politics.

She leads the All-India Anna-Dravida Munnetra Kazhagam (AIADMK) party that, like every major party in Tamil Nadu, promotes the interests of Dravidians over that of Brahmins and other upper caste groups.

Jayalalithaa owes her entry into Tamil Nadu politics to the late M.G. Ramachandran, the former chief minister who was her co-star in 25 films. But, like other Indian women politicians, having once tasted and exercised power, she never looked back, leveraging her own charisma as a movie star to face down powerful male opponents.