MAKUENI DISTRICT, Kenya, May 22 2011 (IPS) - Gadam sorghum was introduced to semi-arid regions of eastern Kenya as a way for farmers to improve their food security and earn some income from marginal land. The hardy, high-yielding sorghum variety has not only thrived in harsh conditions, it has won a place in the hearts – and plates – of local farmers. 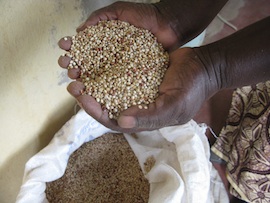 In 2010, East African Breweries Limited (EABL), the regional beverage giant, was seeking around 12,000 tonnes of sorghum to brew beer.

“The programme is a public-private partnership with an aim to improve income and food security among smallholder farmers in arid and semi arid parts of Kenya,” said Dr David Miano, the programme’s national coordinator.

The idea was to introduce a viable crop for largely marginalised land in Kenya’s arid zones, giving farmers there an additional crop that can sustain their livelihoods.

Eastern Kenya is characterised by drought, sometimes going without rain for two to three years at a stretch. After careful selection from several existing sorghum varieties, scientists say that gadam has been found to be the best placed variety able to survive and yield well in such tough climatic conditions.

“Apart from being ideal for beer brewing, it is as nutritious as any other variety of sorghum,” said David Karanja, a research scientist at KARI and the principal investigator for the Gadam Sorghum Production and Marketing Project

Sorghum is not a new crop in this part of the country. Farmers here have always grown red sorghum varieties, but in small quantities as few people cared to eat it, and there was no market for it.

Despite persistent drought in this semi-arid part of the country, farmers have for years opted to grow maize, which is highly vulnerable to the conditions.

Gadam is a sorghum variety from Southern Sudan. It is early-maturing, high yielding, and is highly adapted to stressful drought prone areas. KARI is in the process of crossbreeding it with other varieties – hopefully to come up with a more superior variety.

“When the government introduced this sorghum variety for the first time in 2009, I was reluctant to take it on despite the promise of a ready market,” said Teresia Munyau, the chairlady of the Tears of Women Farmers Self Help Group and one of 3,200 farmers who took part in the project.

She committed two hectares to sorghum – a quarter of the land owned by her family in the village of Mwaani, in Makueni District. She harvested twelve 90-kilogramme bags of grain. Through the self-help group, she sold eight bags to Smart Logistics, the firm contracted by the breweries company to purchase sorghum on its behalf at 1530 Kenyan shillings per bag (17 dollars), and kept four for domestic use.

She plans to plant sorghum on four and a half hectares next planting season.

“Seventeen shillings per kilo – paid by the breweries company – is far higher than the Sh 10 or even less paid for the same quantity of maize, during the harvesting period,” said Veronica Mutindi, a farmer from Kitwasi village. “It’s a premium price, given that before we got access to the commercial market, we used to sell a kilo of red sorghum at five shillings a kilo to local consumers.”

Makueni district farmers were happy with the yield, but researchers say that an outbreak of quelea birds was a major setback. “In some areas, the birds consumed more than a half anticipated yield while still in farms. This means that another season without such an outbreak will guarantee much higher yields,” said Karanja.

The initial plan, supported by EABL and KASAL, was for clusters of farmers to combine their harvests for sale to Smart Logistics which would further consolidate the crop and deliver it to the brewers in bulk.

However, only 875 of the more than 3,000 farmers who took part in the pilot project, agreed to sell even part of their harvest to East African Breweries – originally expected to purchase the entire crop.

Like many other farmers, Munyau says it does not make sense to sell her grain when the countryside is expecting drought in the next few months. “I will not go begging for food and alms from humanitarian organisations for my children to eat,” the mother of four told IPS. “That is why I will make sure that I have at least three bags of sorghum in my house at any time.”

“It was due to the plentiful harvests that we started exploring new methods of cooking sorghum, a move that has made the crop popular in just a year,” said Munyau.

Locals have taken to grinding it into flour to make ugali (the flour is mixed with boiling water) or porridge. They also mix the grain with rice, pigeon peas, or beans and other legumes to make delicious meals.

The KASAL program, which is funded by the European Union and the Kenyan government, has now been extended to 3,800 more farmers in other parts of the country, including the Coastal, Rift Valley and Western regions. “We are up-scaling because so far we have not been able to meet the commercial market demand,” said Karanja.

Last year, EABL was seeking 12,000 tonnes of sorghum; farmers in the project delivered close to one thousand tonnes. This year, the company wants even more.

“The breweries company has requested us to supply them with 24 million kilogramnes of sorghum. That is why we must introduce as many farmers as possible to sustain this growing commercial market demand,” said the researcher.