JOHANNESBURG, May 16 2011 (IPS) - Come rain or shine, single mother of five, Sylvia Mathebula,* can be found selling fruit and cigarettes at the roadside because it is the only way her family can survive. “Since the government is not helping us with jobs, rather than work as a maid for a white person I decided to start this little business by myself,” she says lamenting the lack of opportunities for unskilled women. 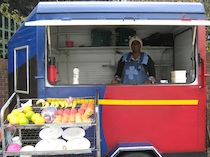 Civil society is calling for women's issues to be prioritised by political parties. Credit: Zukiswa Zimela/IPS

South Africans will take to the polls on May 18 to vote in the country’s fourth local government elections but women’s issues are glaringly absent from many of the party manifestos, observers say.

This is despite the fact that 45 percent of female-headed households live below the poverty line, according to Statistics South Africa.

Janine Hicks from the Commission on Gender Equality says that none of the five major parties have mainstreamed the issue of gender. “We have looked at a sample of party manifestos and we did a scan and analysis and in the main parties have not mainstreamed gender in their manifestos. Their main focus seems to be on service delivery,” she says.

Hicks says service delivery means something different for women and men as women have different needs compared to men. Municipalities need to recognise this and plan accordingly for service delivery. If there is no adequate sanitation in schools, girls tend to drop out of school because of the lack of private, functioning latrines and water when they menstruate, she adds.

During the last general elections in 2009 the Africa Media Monitor found that gender issues only featured in one percent of the rhetoric, this is despite the fact that women constitute more than half the country’s population and more than half the registered voters.

This is also despite the fact that South Africa has achieved a 45 percent female representation in parliament. This places the country third in the international women in Parliament rankings, behind Rwanda and Sweden.

Lisa Vetten, from the Tshwaranang Legal Advocacy Centre, says that while there has been an increase in the number of female representation in parliament, the situation on the ground has gotten worse for them. There has also been a decline in policies that would improve women’s lives.

Vetten says this is because it is difficult for women to fight for women’s issues if they are not on the party’s agenda. “What we need to remember is that women represent political parties, we don’t vote for them as women. They are there to represent the line that their political parties take which makes scrutinising party manifestos very important,” she says.

Vetten further adds that is important not to think of women as one homogenous group but to identify their specific needs. She says that some women are more at risk than others. Lesbians in South African townships are vulnerable targets for corrective rape and homophobia. Corrective rape is when men rape homosexual women with the belief that they can change their sexual preference.

The country has been rated by Interpol as having the worst incidence of rape among Interpol states.

“Already we have had two murders (of lesbians) in KwaThema in Springs. We need to ask what local government is doing. Clearly there is a problem in that area,” she says. Eudy Simelane, a lesbian, was raped and murdered in 2008. In April 2011 Noxolo Nogwaza, a victim of corrective rape, was gang raped and murdered.

Vetten says that sex workers are also a vulnerable and marginalised group. “Loitering and some municipal by-laws are used to unlawfully arrest women who engage in sex work. We see police abusing women when they arrest them. Women are reluctant to go and report when they have been raped as sex workers,” says Vetten.

“I think there is also reluctance sometimes, people feel like women have enough equality and they don’t need more,” Vetten says.

Hicks points out that although men and women deserve equal access to energy and services, their positions in their family and in society means that they need them for different things.

Often the onus is on women to provide fuel for the family. This is something that municipalities need to consider when prioritising who should be able to access electricity, and even the cost of electricity for poor communities Hicks adds.

“So you look at women gathering coal, and dung and other unclean forms of energy using productive hours that they could use for running a small business in gathering energy,” says Hicks.

Vetten called for civil society to be louder in voicing the needs of women and making sure that women’s needs do not fall off the agenda.

Meanwhile, Mathebula will not be voting on May 18. She have given up hope and lost faith in government. “This voting that we do does not work. All they want is for us to vote while they get all the money,” she says.