WASHINGTON, May 3 2011 (IPS) - When George W. Bush rejected a Taliban offer to have Osama bin Laden tried by a moderate group of Islamic states in mid- October 2001, he gave up the only opportunity the United States would have to end bin Laden’s terrorist career for the next nine years. 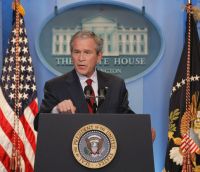 "You know, I just don't spend that much time on him," Bush said of bin Laden at a Mar. 13, 2002 press conference. Credit: White House photo

The al Qaeda leader was able to escape into Pakistan a few weeks later, because the Bush administration had no military plan to capture him.

The last Taliban foreign minister, Wakil Ahmed Muttawakil, offered at a secret meeting in Islamabad Oct. 15, 2001 to put bin Laden in the custody of the Organization of the Islamic Conference (OIC), to be tried for the 9/11 terror attacks on the United States, Muttawakil told IPS in an interview in Kabul last year.

The OIC is a moderate, Saudi-based organisation representing all Islamic countries. A trial of bin Laden by judges from OIC member countries might have dealt a more serious blow to al Qaeda’s Islamic credentials than anything the United States would have done with bin Laden.

Muttawakil also dropped a condition that the United States provide evidence of bin Laden’s guilt in the 9/11 attacks, which had been raised in late September and reiterated by Taliban Ambassador to Pakistan Abdul Salam Zaeef on Oct. 5 – two days before the U.S. bombing of Taliban targets began.

There had been sketchy press reports at the time that the Taliban foreign minister had made a new offer in Islamabad to have bin Laden tried by one or more foreign countries. No Taliban or former Taliban official, however, had provided details of what had actually been proposed until Muttawakil’s revelation.

Muttawakil, who was detained at Bagram airbase for 18 months after the ouster of the Taliban regime and now lives in Kabul with the approval of the Hamid Karzai government, told IPS he had also offered a second alternative – a “special court” to try bin Laden that Afghanistan and two other Islamic governments would establish.

Muttawakil was believed by U.S. officials to have had the trust of Taliban leader Mullah Omar. A December 1998 cable from the U.S. Embassy in Islamabad said he was “considered Omar’s closest adviser on political issues” and that he had become Omar’s “point man” on foreign affairs in 1997.

The new Taliban negotiating offer came almost immediately after the U.S. began bombing Taliban targets on Oct. 7, 2001. The fear of the bombing – and what was likely to follow – evidently spurred the Taliban leadership to be more forthcoming on bin Laden.

But Bush brusquely rejected any talks on the Taliban proposal, declaring, “They must have not heard. There’s no negotiations.”

Bush rejected the Taliban offer despite the fact that U.S. intelligence had picked up reports in the previous months of deep divisions within the Taliban regime over bin Laden. It was because of those reports that Bush had authorised secret meetings by a CIA officer with a high-ranking Taliban official in late September.

But Grenier was only authorised to offer Osmani three options: turning bin Laden over to the United States; letting the Americans find him on their own; or a third option, as Tenet described it, to “administer justice themselves, in a way that clearly took him off the table”.

Osmani rejected those three options, as well as a subsequent proposal by Grenier on Oct. 2 that he oust Mullah Omar from power and publicly announce on the radio that bin Laden would be handed over to the United States immediately.

On Oct. 3, Bush publicly ruled out negotiations with the Taliban. They had to “turn over the al Qaeda organisation living in Afghanistan and must destroy the terrorist camps,” he said, adding “There are no negotiations.”

Milton Bearden, the former CIA station chief in Pakistan during the Mujahideen war against the Soviets, observed to the Washington Post two weeks after Bush had rejected Muttawakil’s new offer that the Taliban needed a face-saving way of resolving the issue consistent with its Islamic values.

“We never heard what they were trying to say,” Bearden said.

The Bush refusal to negotiate with the Taliban was in effect a free pass for bin Laden and his lieutenants, because the Bush administration had no plan of its own for apprehending bin Laden in Afghanistan. It did not even know what level of military effort would have been required for the United States to be able to block bin Laden’s exit routes from Afghanistan into Pakistan.

The absence of any military planning to catch bin Laden was a function of Bush’s national security team, led by Vice-President Dick Cheney and Secretary of Defence Donald Rumsfeld, which had firmly opposed any military operation in Afghanistan that would have had any possibility of catching bin Laden and his lieutenants.

Rumsfeld and the second-ranking official at the Pentagon, Paul Wolfowitz, had dismissed CIA warnings of an al Qaeda terrorist attack against the United States in the summer of 2001, and even after 9/11 had continued to question the CIA’s conclusion that bin Laden and al Qaeda were behind the attacks.

Cheney and Rumsfeld were determined not to allow a focus on bin Laden to interfere with their plan for a U.S. invasion of Iraq to overthrow the Saddam Hussein regime.

Even after Bush decided in favour of an Afghan campaign, CENTCOM commander Tommy Franks, who was responsible for the war in Afghanistan, was not directed to have a plan for bin Laden’s capture or to block his escape to Pakistan.

When the CIA received intelligence on Nov. 12, 2001 that bin Laden had left Kandahar and was headed for a cave complex in the Tora Bora Mountains close to the Pakistani border, Franks had no assets in place to do anything about it. He asked Lt. Gen. Paul T. Mikolashek, commander of Army Central Command (ARCENT), if he could provide a blocking force between al Qaeda and the Pakistani border, according to Col. David W. Lamm, who was then commander of ARCENT Kuwait.

But that was impossible, because ARCENT had neither the troops nor the strategic lift in Kuwait required to put such a force in place.

Franks then had to ask for Pakistani military help in blocking bin Laden’s exit into Pakistan, as Rumsfeld told a National Security Council meeting, according to the meeting transcript in Bob Woodward’s book “Bush at War”.

But Rumsfeld and other key advisers knew it would a charade, because bin Laden was a long-time ally of the Pakistani intelligence service, the ISI, and the Pakistani military was not about to help capture him.

Franks asked President Pervez Musharraf to deploy troops along the Afghan-Pakistan border near Tora Bora, and Musharraf agreed to redeploy 60,000 troops to the area from the border with India, according to U.S. Ambassador Wendy Chamberlin, who was present at the meeting.

But the Pakistani president said his army would need airlift assistance from the United States to carry out the redeployment. That would have required an entire aviation brigade, including hundreds of helicopters, and hundreds of support troops to deliver that many combat troops to the border region, according to Lamm.

Those were assets the U.S. military did not have in the theatre.

Osama bin Laden had been effectively guaranteed an exit to Pakistan by a Bush policy that had rejected either diplomatic or military means to do anything about him.

In an implicit acknowledgement that the administration had not been seriously concerned with apprehending bin Laden, Bush declared in a Mar. 13, 2002 press conference that bin Laden was “a person who’s now been marginalised”, and added, “You know, I just don’t spend that much time on him…”