LUSAKA, May 18 2011 (IPS) - According to the World Bank, less than eight percent of Zambian adults have bank accounts. For the millions who make their living in the informal economy, this prevents them from earning interest on any savings they have or securing credit needed to expand small businesses beyond mere survival. 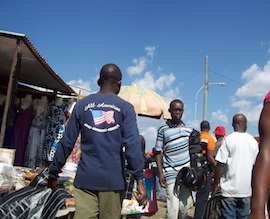 Just half a million people were in formal employment in 2008 out of an estimated total labour force of about 5.2 million. With so few formal jobs, it is inevitable that many have turned to livelihood strategies that include small businesses such as tailor shops, the grocery stands known locally as ‘tuntemba’, or charcoal stands at markets. Profits from this kind of trade are often small and offer little opportunity to expand the ventures.

Commercial banks have little interest in lending – or even banking – small entrepreneurs’ money. Minimum opening balances range between $150 and $300 – far beyond the reach of most Zambians, even before considering hefty monthly charges.

“In the context of Zambia, where 58 percent of the population lives on less than one dollar a day,” says José de Luna Martinez, a senior economist at the Finance and Private Sector Development Office of the World Bank, “these minimum balances prevent most people from having access to basic banking services. Thus, with the exception of high income households, public servants and employees of large companies, most Zambians do not have access to products offered by banks.”

Commercial banks also have little appetite for the risks of loaning money to small and medium-sized enterprises, especially in light of the relatively small amounts owners of small businesses are seeking and the time and cost associated with pursuing defaulters in the Zambian courts.

Microcredit available – to some

These small enterprises instead turn to microfinance institutions (MFIs) which have less burdensome requirements.

“When we started our cooperative,” says Rebecca Mwanza, “we needed to open a bank account for our operations. But we soon discovered that it was not that easy to do, because banks were asking us for a minimum opening book balance of about 700,000 kwacha (around $150).”

Mwanza is the vice-chairperson of the Chawama Area Women’s Association, a collective with 800 members drawn from a crowded peri-urban area in southern Lusaka. “It was only when we turned to microfinance institutions that we found a cheaper way of doing this.”

“Cheaper” is a relative term – MFIs lend money at rates of interest beginning at 50 percent for short-term loans (1-3 months) and interest can climb as high as 75 or even 100 percent if the repayment period is longer than four months.

The Chawama Association borrowed money for fuel to launch a milling business which was instantly profitable, but not everyone is so fortunate.

Dickson Mweemba retired from government service seven years ago. For the past two years, he has been trying without success to get a loan to help him re-establish his poultry business. He left the civil service in a strong financial position, but the cost of sending his four children to university quickly ate up his savings and bled capital from his backyard poultry.

A costly divorce settlement claims most of his monthly pension, but Mweemba is sure an injection of funds would restore his poultry operation to profit.

“I know I can succeed in the chicken business,” he says, “but the banks will not lend to me because I do not have collateral.”

He approached two MFIs for a loan, but they declined to lend him anything more than a million Zambian kwacha – the equivalent of 75 dollars.

“But what can I do with one million kwacha, for goodness sake?” he snapped, adding that a bag of chicken feed costs nearly 40 dollars and a farmer needs 35 bags to raise 500 birds over a six-week period.

Mweemba needs more cash than the MFIs he approached are prepared to lend him. Commercial banks won’t look at his plans either as – living in a rented house on a fixed income – he cannot put up acceptable collateral.

At the other end of MFIs’ potential market, the half of the population living on less than a dollar a day, who will have neither a formal income nor furniture against which to secure a microloan, have little option but to turn to loan sharks, commonly known as ‘kaloba’.

Nathan De Assis, chairman of Pulse Financial Services Limited, sees the limited access to banking by a majority Zambians, as untapped potential for microfinance institutions like his to grow.

“With the increasing competition within the financial sector, evidenced by the increasing number of commercial banks and MFIs, Pulse will focus on its core business: the micro, small and medium-sized enterprises,” he told IPS.

There are now 25 MFIs registered in Zambia, but their total number of clients remains relatively small, at less than 100,000. To expand beyond this, they will have to find new models if credit is to become more widely available – and affordable – for a majority of Zambians.