BUENOS AIRES, Jun 6 2011 (IPS) - Argentina is moving backwards in terms of maternal mortality, with a rate three times higher than those of its neighbours Chile and Uruguay. Maternal deaths, which are actually increasing, are often the result of unsafe abortions, in a country where the practice is illegal. 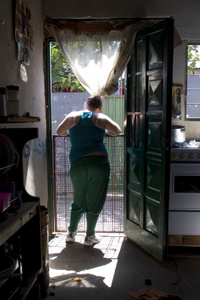 These are the conclusions of social organisations that monitor the official statistics on deaths of healthy young women from pregnancy-related causes.

Complications related to pregnancy and childbirth are the main cause of death among young women, and many of these deaths are the result of abortion, which is only legal in this country in specific circumstances, such as rape.

As part of MDG 5, on maternal health, Argentina has also made a commitment to close the gap in the mortality rate between the different provinces. But the gap keeps growing, especially between Buenos Aires and northern provinces like Jujuy or Formosa, where maternal mortality is at least twice the national average.

The Foundation for Studies and Research on Women (FEIM) warned that there is also “a high level of underreporting” of maternal deaths, a large proportion of which she said are “preventable or avoidable.”

FEIM director Dr. Mabel Bianco told IPS that although Argentina has health and sex education programmes that are essential to addressing the problem, the public is still largely unaware of the services that are available, such as free birth control.

In neighbouring countries like Chile or Uruguay, where universal access to such programmes has been guaranteed “for decades,” the results are clear, she said. In Chile, the maternal mortality rate is 20 per 100,000 live births, while in Uruguay it is 15 per 100,000, she noted, citing statistics from 2005.

Latin America has a disproportionately high average rate of maternal deaths: 130 per 100,000 live births according to 2007 figures provided by the United Nations, which warns that of all the MDGs, this region is lagging farthest behind on the maternal health targets.

Argentina’s sexual and reproductive health programme, which began to be implemented in 2003, provides for free family planning advice and contraception at public health facilities.

But the plan has many shortcomings. “Ignorance weighs more than ideology in many health services, and there are no good training programmes for health professionals,” said Bianco.

Women, especially poor women, continue to run into doctors who deny them certain birth control methods because they consider them “abortifacients,” or make it difficult for them to acquire contraception. For example, they require young women who ask for condoms to come with an adult, even though adolescents over 14 years of age have the right to access these services without being accompanied by an adult.

“In some health centres, they ask you for your identity document to give you condoms,” Bianco complained. She added that in other centres, where the health care professionals fully support the sexual and reproductive health programme, there is a shortage of materials.

For instance, birth control is not always delivered in the quantities required, or there are not enough pamphlets and posters needed to raise awareness among women that even if they are not pregnant they can come in for free sexual health and family planning services.

Another major problem, said Bianco, is that abortions are still illegal, and many of them are thus performed in unsafe conditions. An estimated 500,000 abortions a year are practiced in this country of 40 million people, and among poor women the risk of death from complications is especially high.

She also criticised the fact that it is nearly impossible to obtain a legal abortion even in the limited circumstances under which it is permitted by an archaic law, due to the lack of a protocol for dealing with such cases in public hospitals.

Under the law, which dates back to 1922, abortion is only legal in cases of rape or risk to the mother’s life or health, or for women with mental disabilities, described by the law as “idiots” or “demented”.

However, many doctors refuse to perform abortions under any circumstances. Although the Health Ministry has drawn up a protocol for health professionals to follow in treating patients in such situations, it has been stalled in the ministry for three years, awaiting the minister’s signature.

A movement of 250 organisations carrying out the National Campaign for the Right to Safe, Legal and Free Abortion is behind a draft law that has gained increasingly wide support.

The bill was first introduced in 2007 by 22 legislators, but died in Congress. The campaign presented it again in 2010, and it now has the backing of 50 lawmakers prepared to sponsor it.

The draft law would make first-trimester abortion legal on demand, and would make free abortions available in public health centres. It would also extend the time frame for legal abortion in cases of rape, risk to the mother’s health, or severe fetal malformations.

Psychoanalyst Marta Rosenberg, one of the driving forces behind the campaign, told IPS that above and beyond the H1N1 flu epidemic, the number of deaths from abortion complications continues to rise in absolute terms in the official statistics.

But she said that over the next few years the number could stabilise, due to increasingly widespread use of misoprostol or RU486, also known as “medical abortion” – an easily accessible drug that provides a cheaper, lower risk alternative to surgical termination of pregnancy.

Rosenberg said it was difficult to predict whether or not the law legalising abortion would pass this year, as the campaign hopes. “What we want is for it to be debated, and in that sense we have managed to put the issue on the political agenda,” she said.