KIGALI, Jul 22 2011 (IPS) - When Callixte Munyabikari, a potato farmer from Gakenke in northern Rwanda, was rushed to a regional hospital after he fell ill with diarrhoea, he thought it was just a bad case of food poisoning. 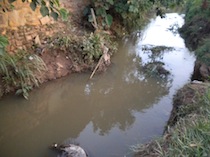 A contaminated stream in Kimicanga, a suburb in Kigali. A majority of people in rural Rwanda still consume polluted water from rivers. Credit: Aimable Twahirwa/IPS

“I never imagined that it was an intestinal disease that I contracted from drinking water from (a) neighbouring river. Yes, the river was contaminated. It is used everyday by local residents for cooking and other activities, such as washing clothes along the banks,” he said.

“It is important to eradicate the persistent behaviour among rural communities. A number of households used to have access only to a shared latrine,” said Rwanda’s minister of infrastructure, Colette Ruhamya, while underlining the role of proper sanitation and hygiene as the main component of sustainable development.

“Everybody can dig, and the latrine (and) the roof are lower cost material(s),” she said. Government’s aim is that each household, wherever possible, should have access to its own sanitation facility. Rwanda seeks to be a model of hygiene and sanitation for other African countries.

In fact, it is one of only four countries in Africa which look set to achieve Millennium Development Goal 7 to ensure environmental sustainability, which includes halving the proportion of the population without sustainable access to safe drinking water and basic sanitation. The other three countries are Mozambique, Ghana, and Sierra Leone.

Delegates at the Africa Sanitation and Hygiene Conference (AfricaSan 3), which was held from 19 to 21 Jul. in Kigali, were divided on whether poverty was the main cause of poor sanitation facilities and waterborne diseases currently affecting millions of people across the continent.

“There is an urgent need for African countries to address the issue of sanitation and hygiene without relying on donors’ aid,” declared Rwandan President Paul Kagame.

According to him, the only inclusive solution to promote measures to prevent waterborne diseases is from local initiatives and without having to rely on foreign assistance.

Kagame’s comments came at a time when experts from several African praised the initiatives undertaken to promote hygiene across the Central African nation.

Since 2001, Rwanda has embarked on strong measures aimed at wiping out unhygienic practices, while sensitising local communities in urban and rural areas to change behaviour and bad habits that relate to poor hygiene.

Other initiatives taken to prevent waterborne diseases include the installation of toilets for each household across the country, while ensuring potable water supply systems in several remote areas across the country. Official statistics show that 61 percent of Rwanda’s rural population have access to improved drinking water sources, while 20 percent has access to improved sanitation.

However, some participants expressed pessimism arguing that there is still a long way to go as only four countries across the continent are on track with providing access to safe drinking water, compared to the rest their counterparts.

“It’s better to be realistic about commitments made (by governments) toward sustainable solutions, but this implies going along with proposed actions, by ensuring that the majority of rural communities are benefiting (from a) potable water supply and adequate sanitation infrastructure,” said the Zimbabwean minister of water resources development and management, Samuel Sipepa Nkomo.

“It is still unbelievable that only four African countries are on track toward achieving (the) MDG on sanitation,” Nkomo deplored. He blamed inadequate policies to mobilise financial resources in some African nations as a reason.

Speaking on the fringes of the joint summit by the United Nations and African Ministers Council on Water, Nkomo urged governments in countries still lagging behind achieving the MDG for concrete actions, while identifying that priority was need at grassroots level.

However, civil society is still optimistic that Africa could finally be turning a corner in the sanitation crisis; officials say the big challenge is more about adopting adequate policies in this area to curb the consequences of waterborne diseases.

According to Lydia Zigomo, the head of the environmental non-governmental organisation WaterAid, the challenge (in policy decision-making) remains formidable.

“A total of 584 million people in Africa do not have an improved sanitation, and the poorest are 18 times more likely to practice open defecation,” Zigomo said. She said that the issue of hygiene has always been the most neglected and off-track of the MDGs, with little funding, resources or political will to address the crisis.

But some representatives of African governments say that necessary resources are available, and that what was most needed was not money, but educating communities on how they can change bad habits with regards to hygiene and sanitation.

“This includes providing toilets after it has been noticed that hundreds of thousands of Africa’s rural population still practice open defecation, while ignoring the worst consequences of hygiene-related diseases,” Nkomo told IPS.

“In general, 1.8 million people die every year from diarrhoea diseases, which includes cholera, while 90 percent are children under five, mostly in developing countries,” a World Health Organization report said.

Northern Rwanda is a region described by health experts as having the highest number of hygiene- related diseases. Here a majority of people consume polluted water from neighbouring rivers, which run across the mountainous region.

Government, in collaboration with local administrative leaders, has implemented a number of measures, including sensitising the population to changing bad habits, and not consuming polluted water.

Since 2004, the International Committee of the Red Cross has implemented 23 clean water supply projects in several rural areas in northern Rwanda as a way to prevent against contracting waterborne diseases.