Aiming a Kick at Homelessness 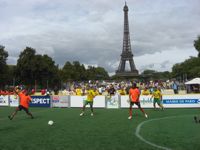 A game in play at the Homeless World Cup. Credit: A.D.McKenzie/IPS.

The noise originated from an unusual event: the ninth annual Homeless World Cup, a football tournament that comprises teams of homeless men and women from around the world.

On Sunday, Scotland won in the men’s final and Kenya in the women’s, in matches played at the Champ de Mars, a huge dusty park around the Eiffel Tower.

But the goal of the Homeless World Cup is not only to have winners but to help to eradicate homelessness, according to Mel Young, president and founder of the event whose headquarters are based in Edinburgh, Scotland.

“We’re interested in the impact of the World Cup, in what happens to the players afterwards,” he told IPS. “Our objective is to end homelessness, and we’re using football to do this.”

Young, a former journalist, added that while sport may not be the only means to change the lives of homeless people, it was a simple and inexpensive way to make a difference.

“Football is an easy way of creating access,” he said. “Everyone can play, whether you’re good or bad. And being on a team gives the players a sense of belonging, and a sense of family. From there, you can move on to finding a job and finding shelter. The World Cup experience is very transformational.”

He and the event’s supporters believe that governments should support all initiatives to help the increasing number of people being pushed into homelessness by the global financial crisis.

“We have to do something to make a change,” said Jeff Bwetusia, a volunteer at the World Cup who himself used to be homeless. “An event like this raises awareness and makes people see that those living on the streets are normal people, just like everyone.”

Bwetusia said the world cup gave players a sense of dignity and purpose. “It helps to make us feel better about ourselves,” he told IPS. “Everyone can contribute in some way.”

In France, the number of homeless people has passed 200,000, according to Droit au Logement, a local pressure group. Discrimination against them is common, although President Nicolas Sarkozy declared in 2007 that “the right to housing is a human obligation.” The European Union meanwhile has called for a census on homelessness.

The one-week tournament in Paris drew 64 national teams, including 16 women’s squads. All the players come from precarious circumstances, although the definition of homelessness may vary from country to country, Young said.

The organisers try to hold the event in city centres so that it’s accessible to both players and spectators. The turf used in the tournament is smaller than the standard-sized football field because such playing areas are easier to create in cities, Young explained. The normal soccer fields are usually on the outskirts and thus more difficult to reach, especially for people without private transportation.

With the Eiffel Tower in the background, the matches here were played in a fenced off area with special rows of seats for spectators. Entry was free, and viewers were treated to an energetic form of street soccer, with four players to a team (plus another four in reserve).

Mexico, with both men’s and women’s teams, came second in the two categories, which made coach Ulises Reza Arreola doubly proud.

“This is an incredible event for the players,” he told IPS. “They come out of this feeling that they can transform their lives.”

Mexico City will host the 10th Homeless World Cup, and the special anniversary is expected to garner more attention for the event, contributing to changes in government and public perceptions of homelessness, he added.

But even as the Mexican team posed smilingly with their trophies, organisers acknowledged that it’s not an easy road to put on events such as this and to make lasting changes.

To enable players to travel from one country to another, for instance, the World Cup planners often have to start by getting participants an “identity” before applying for travel documents.

“Some people living on the street don’t even know how old they are, so we have to begin with the local authorities to provide them an identity,” said Young. “After that we have to obtain a passport and then a visa depending on the country.

“It’s tricky and difficult, and we work on it all year,” he said.

Countries that bid to host the Homeless World Cup have to give assurances that the players will be allowed entry. In France, the city of Paris was one of the event’s sponsors, and the mayor’s office contributed to creating the playing area with fences, seats, and goal posts and nets.

The players were housed in hostels or student accommodations. “With the students gone for the summer, it’s a good arrangement for us,” one player said. “We have a place to get a good night’s sleep and to take a shower.”

Young says that 23 countries have already shown interest in hosting future tournaments of the Homeless World Cup. The official attention shows that the event has come a long way from an idea that started over a beer, he told IPS.

He said that it was at a 2001 conference on homelessness, held in Cape Town, South Africa, that the idea for the World Cup came as he and a colleague had a drink.

“We were talking about what a great conference it was, but we both noticed that there had been no actual homeless people involved,” he recalled. “We started thinking of ways to get people involved and we both hit on football as a means because then there would be no language issues involved.”

“It was going to be only one event, but it was such a success that we decided to do it every year,” Young said.

The main reason for that decision was the obvious impact on the players, many of whom found renewed motivation for getting off the street.

“When you’re homeless, you’re isolated and you only think about surviving from day to day,” Young said. “The World Cup provides a way to look beyond the next day.

“Some of the stories of these players’ lives are horrendous,” he added. “But you would never believe it when you see them moving and kicking a ball on the field.”