NOUAKCHOTT, Aug 30 2011 (IPS) - In a bid to reduce food insecurity, the Mauritanian government is turning to several new approaches to agriculture, including expanded irrigation schemes, popularising new crops and harnessing the energy of recent graduates. 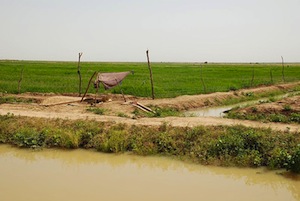 The new strategies follow a period that focused on training for smallholder farmers, the introduction of mechanisation for large-scale production, as well as guaranteeing good prices to farmers as means of ensuring a steady supply of farm produce.

Ahead of the 2011-2012 growing season in this West African country, 125 unemployed graduates were put through basic training in farming techniques. They have taken charge of 1,500 hectares of land on the M’Pourié plain, on the banks of the Senegal River not far from the southern Mauritanian city of Rosso.

Rabia Mint Zeidane, an economics graduate, is managing a field of ten hectares not far from Rosso. She’s been working here since May. Under the hot sun, far from family and friends, she spends the whole day clearing irrigation canals alongside her two labourers to ensure adequate water for her rice beds.

She declares herself determined to succeed in a domain traditionally reserved for men. Mint Zeidane told IPS that, like her counterparts, she has benefited from an agriculture training programme, access to a plot of land, a grant equivalent to roughly 1,430 dollars as well as two dairy cows.

Aside from the programme involving unemployed graduates, the authorities have also introduced wheat farming in a programme covering six of the country’s 13 regions.

The government has ambitious plans to extend the country’s irrigated acreage. Last year, not more than 20,000 hectares were irrigated, but for the season now under way, it is expected to exceed 30,000 ha, including 3,700 hectares devoted to growing rice. Wheat, vegetables and fruit will also be grown, depending on the varying characteristics of the soil.

In the capital, Nouakchott, and around Rosso and other areas, there were intensive preparations beginning in March, to make credit available, raise awareness, assess and improve access to water, and to put in place measures against potential pests.

Under pressure due to food insecurity and the rising cost of essential commodities such as rice, wheat and sugar, the government seems to be determined to make up for lost time.

Kinks in the plan

But in the fields which are already at the stage of tillage and planting, in the regions of Trarza, Brakna and Gorgol, in the south of Mauritania, all is not going as well as the producers had hoped.

Mohamed El Ghaly Ould Maayouf, who has a large field on the Rosso-Boghé road, says that the cost of production for even a single hectare of rice is very high – around 1,300 dollars, after accounting for the exorbitant costs of labour, fuel and transport.

Maayouf says he’s equally worried by the risks posed by uncertain rainfall and pests. He is particularly bitter over the spread of typha, an invasive reed which chokes irrigation canals.

Daouda N’Diaye, who cultivates a field at Boghé, complains about the limited number of tractors available for tillage. Alioune Awbek, a farmer in Trarza, calls for the reactivation of a fund to support producers who suffer setbacks due to disasters during the growing season.

Salem Merrakchi, an agricultural engineer who is supervising wheat production, says the farmers who have followed the technical advice on offer can expect good results. He says he expects production of more than 3,840 tonnes of wheat from 1,882 hectares, though he stresses that some regions have proved unsuitable for the new crop.

“Difficulties linked to poor knowledge of wheat cultivation, animals wandering into fields, late preparation of plots and the absence of selective herbicides in Mauritania have held them back,” he told IPS.

Bettar Ould El Bou, director general of Crédit Agricole – an agriculture finance institution with its roots in rural savings and loan cooperatives – said that over ten years, his institution had disbursed more than 43 million dollars in loans. But not only has less than 30 percent of this money been repaid, a good part of this money has not been invested in agriculture. He said the institution has put in place reforms to better monitor the real use of its funds.

Niang Samba Demba, president of an umbrella group of cooperatives in the Gorgol region in the south of the country, said that previous efforts to introduce irrigation in the 1980s were not fully thought through. He says many farmers abandoned irrigation farming in the subsequent decade because of losses to pests, inadequate techniques for threshing wheat, and climatic uncertainties. Many farmers were left owing money, leaving them ineligible for new loans.

Demba added: “This time, we have no excuse for failure. The means are available and there is support for the programmes at the highest level. It’s a question of survival and of independence in cereal production.” He said farmers now have access to water, tractors and combine harvesters, improved seeds, quality fertilisers and technical training.