LIMA, Oct 28 2011 (IPS) - “I caught tuberculosis, but I’m lucky because it’s been cured,” says Hernán Arévalo from his bed in the new hospital at the Peruvian prison of Lurigancho, one of the most crowded and dangerous in Latin America. “Before, whoever came in here was unlikely to get out alive.” 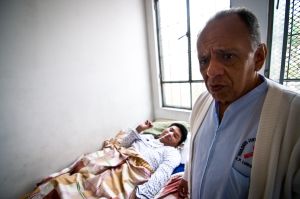 The prison of San Juan de Lurigancho, close to the city of Lima, “did not have a health centre four years ago, but a kind of antechamber to hell,” Arévalo told IPS, emphasising the importance of the hospital, built with money contributed by the Global Fund to Fight AIDS, Tuberculosis and Malaria.

The 54-year-old prisoner did not need to be told how dreadful health care used to be, before the hospital was built in Lurigancho, which had 10,000 prisoners in 2008 and today has 6,000, although it was designed to hold 3,500.

Arévalo, who was sentenced to 20 years for drug smuggling, has served 13 years in Lurigancho. “In the past, you would go for treatment for one disease and come out with an even more serious illness, but now I am being given all the medicines and proper food,” he said.

This radical transformation is due to the hospital, built in 2006 by the National Penitentiary Institute (INPE) at a cost of one million dollars. It was financed by the Global Fund, a partnership of governments, the private sector, civil society and affected communities created in 2002.

Since then it has spent 21.7 billion dollars on programmes in 150 countries that have treated 3.2 million people living with HIV/AIDS and 8.2 million tuberculosis patients.

In Peru alone, the Global Fund gave seven million dollars between 2004 and 2008 to build the health centres at the prisons of Lurigancho and Tambopata, in the southern Madre de Dios jungle region, and to modernise tuberculosis wards, improve health care infrastructure in these and 10 other prisons, and provide medical equipment to reduce infections.

“In Lurigancho prison today there are at least 420 tuberculosis patients and another 450 people diagnosed with AIDS, a much lower figure than in previous years thanks to having adequate infrastructure and trained personnel,” said doctor José Best, INPE’s deputy director of health.

“If we didn’t have these resources, and still had a population of 10,000 inmates as in 2008, we would probably have twice the number of patients today,” said Best, speaking to IPS in the Lurigancho health facilities under the weary gaze of the tuberculosis patients.

“The situation has changed radically, although we still have some problems,” he said.

INPE’s greatest challenge is to secure its own budget to run the health centre.

“Now it’s up to us to carry on the health service. The budget is essential, because the probability of contracting tuberculosis in the Lurigancho prison is 27 times higher than out on the street,” said Henry Cotos, head of prisons for the Lima region.

Cotos told IPS that drastic measures are taken to prevent infection with tuberculosis and AIDS in the prison, but the inmates always find ways round the security measures. The worst problem is that visitors also become infected.

“We have managed to reduce the infection rates, but the figures are still worrying, mainly due to overcrowding,” he said.

On the second floor of the tuberculosis ward there are at least 20 cells with thick steel doors that isolate the inmates from anyone who is not medical or nursing staff. They are used for prisoners infected with multidrug-resistant tuberculosis (MDR-TB), which is particularly dangerous.

Curing MDR-TB takes at least 18 months and the treatment is expensive. “It’s a difficult and exhausting course of treatment, and very painful because of the numerous injections involved,” said Dr. María Elena Salas.

“The reason these patients are kept in strict quarantine is so that they don’t give up the treatment, and don’t infect other people,” she said.

This section, which people can only enter wearing face masks and protective gear, has 28 patients with MDR-TB, some of whom are also living with HIV/AIDS.

Inmate Eddy Ruiz, an activist fighting discrimination against homosexuals, met IPS at Lurigancho prison. Together with members of the Comunidad Virgen de la Puerta, a gay rights group, Ruiz works on preventing the spread of HIV/AIDS and other sexually transmitted diseases, which are one of the greatest concerns in San Juan de Lurigancho.

“There are men who have sex with men, but who are not gay; another group is bisexual; there are transvestites and gays who prostitute themselves; and then there are openly declared homosexuals in the prison, who may have stable partners,” Ruiz said.

“The greatest danger is from those who hide their sexual identity, who are infected and infect others indiscriminately,” said Ruiz, who is serving a six-year sentence for sexual aggression.

Ruiz and the other activists encourage inmates to have rapid diagnostic tests for HIV/AIDS, now that they can be properly treated with appropriate medication.