ATHENS, Nov 1 2011 (IPS) - Harsh austerity measures and a struggling economy have given birth to the ‘new poor’ in Athens, a term used to describe those suffering the impacts of social exclusion and rapidly shrinking civic welfare institutions. 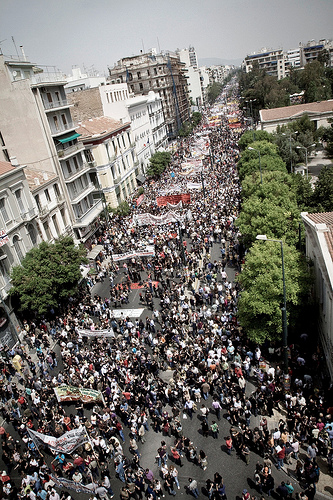 Demonstrations against austerity measures in Athens in May 2010. Credit: Nikos Pilos/IPS

Plunging living standards for scores of Greeks have bred frustration, as the economic crisis tears relentlessly at the social fabric of the country.

Despite the government’s repeated assurances that austerity measures are needed to improve the country’s status vis-à-vis international markets, citizens increasingly believe that the negative impacts of public spending cuts and costs to Greek society far outweigh any positive returns in the global arena.

Since 2010, the government has raised taxes and cut pensions and state salaries across the board.

Last month, the government announced it would put 30,000 workers on reduced pay as a precursor to termination and unveiled its plans to slash the pensions of nearly half a million public sector retirees.

Furthermore, it has imposed a ‘solidarity tax’ ranging from one to four percent of income, to shift the burden of unemployment services from the government onto taxpayers, as well as introduced an additional tax on self-employed workers.

The government has also raised its value-added tax on most goods and services. For instance, taxes on food have shot up from 13 percent to 23 percent.

In spite of all these harsh measures, the government has failed to control its debt. Just last week, the European Union concluded the Brussels Agreement, which decided to cut Greece’s debt burden in half.

The economy contracted by five percent in 2011, while unemployment is inching closer to 20 percent.

As a result many are now facing the threat of extreme poverty for the first time in their lives.

The homeless have multiplied and, despite the approaching winter chill, have gathered en masse in central squares around the country.

Doctors of the World operates a volunteer programme to offer medical support to the homeless and also runs a polyclinic facility in Perama, a district of Athens where a majority of the workforce relied on traditional docks construction and repair facilities for employment.

The collapse of these industries over the last two years effectively stripped 80 percent of the workforce of their jobs and has pushed scores of families residing in the district below the poverty line.

Nikitas Kanakis, head of Doctors of the World, described an Athens on the verge of a humanitarian crisis.

“Out of the 40 kids our pediatrician examined two weeks ago, 23 were malnourished,” he told IPS.

“Some years ago we thought that this country had moved past the point where a lack of food was a prominent social issue. Now we are making public appeals for supplies, so that we can provide those in need with dry rations and clothing along with our medicines.”

According to Giorgos Apostolopoulos, head of the Athens Centre for the Homeless, the lack of food is reaching a crisis point.

The Centre, which distributes food multiple times a day to people in need, has seen a 30 percent increase in visitors since the beginning of 2011.

“We offer 3000 meals every day in our centre and the Greek Orthodox Church offers another 3200 through our facilities,” Apostolopoulos told IPS.

A few days ago the Centre made an open appeal to the public for donations of pasta and canned tomato sauce to cover the weekend rations, since a lack of funds has disturbed the distribution of food.

With additional supplies, roughly 12,000 meals are offered around Athens every day.

“Though we have seen a definite increase in visitors, it is extremely difficult to calculate the exact number of people facing deprivation, since those experiencing such conditions for the first time tend to be extremely secretive,” he added.

Apostolopoulos stressed that he and his colleagues are enduring extreme difficulties on a daily basis in order to keep the centre going.

“Given that the economic and political crisis is exerting enormous pressure on administrative structures we have to fight to survive every day here. Believe me, it is a very difficult reality we have to deal with,” he told IPS.

Another issue is drug abuse, which is now rampant in public spaces, mostly outside universities, without any signs of serious policing or prevention efforts through the welfare state.

Evvagelos Liapis, a field doctor with the Centre for Disease Control and Prevention, said that the Centre’s mobile polyclinics have examined about 8,000 people since June.

“Though we cannot yet offer accurate numbers, we are already able (to discern) an obvious correlation between economic deterioration and the health condition of specific social groups. The impacts of the crisis are mostly felt by the homeless, irregular immigrants and drug abusers in the centre of Athens,” he told IPS.

“We have noticed a significant increase of sexually transmitted diseases like syphilis and diseases transmitted through skin, like warts. We are also researching a possible increase in hepatitis and HIV among those groups of people,” he added.

Liapis believes that declining health conditions are a direct result of the collapse of social programs, such as needle exchanges and injection services for drug abusers.

“An addicted person in acute lack of money would opt to save a euro for his dose instead of buying a new syringe,” he said.

“As well as an increase in sexually transmitted diseases, we also have strong indicators about increased street prostitution and its spread to groups of people hitherto unaffected by social and economic conditions,” he added.

Last September the Greek Minister for Health, Andreas Loverdos, reported that suicides may have increased by as much as 40 percent in the first few months of 2011.