RIFT VALLEY, Kenya, Nov 1 2011 (IPS) - Amina Shakir (not her real name) fled the drought and famine in Somalia for a better life in Kenya. But she did so illegally, placing her faith in the hands of a criminal network headed by Mukhalis or agents in Swahili. In the end her faith was misplaced as she was “sold” into employment upon finally reaching Kenya. 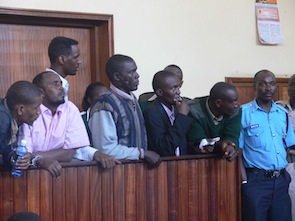 But Shakir is not the only one illegally crossing the border into Kenya. Natural disasters, armed conflict and famine devastating the Horn of Africa have caused an increase in human smuggling and trafficking in the region.

Shakir’s journey took her from a collection point in Somalia to a transaction point in Eastleigh estate, in Kenya. She and several other girls made the over 1,000-kilometre journey in a truck under the guard of five men.

“I was not alone, other girls were in the truck as well, one man was also there. Our handlers assured us of our safety till we get to our destination. I felt I was in safe hands,” Shakir told IPS in halting Swahili.

But when she arrived in Eastleigh estate, a suburb in Nairobi that has become an international business centre, she was sold into employment. She now works as a shop attendant for her “buyer”.

Womankind Kenya, a non-governmental organisation based in Garissa in Kenya’s North Eastern Province, estimates that 50 young girls are trafficked or smuggled to Nairobi from here and Somalia each week.

“Vehicles that transport miraa (a leafy narcotic) from Kenya to Somalia return loaded with young girls and women who end up in brothels in Nairobi or who are shipped to destinations outside Kenya,” says Hubbie Hussein, Womankind Kenya’s director.

The Deputy Provincial Police Officer in Rift Valley Province, Kenya’s largest and most populous province, Ephantus Kiura, confirmed this. “Over 200 illegal immigrants enter the province every week from Sudan, Ethiopia, Tanzania, Uganda and Somalia through (Kenya’s over 400-kilometre porous boarder section), which it shares with these countries,” Kiura says.

The International Organisation for Migration (IOM) estimates that over 10,000 people are trafficked into Kenya’s Coast Province each year. The organisation says that trafficked children from Rwanda, Tanzania, Ethiopia, Somalia and Uganda work as domestic labourers, sex workers and cattle herders across Kenya.

“As of Sept. 28 there were more than 452,000 refugees, mostly Somalis, at Daadab camp. The huge influx of refugees has complicated the movement of people in the region, it has increased the vulnerability of people to trafficking, smuggling and other forms of exploitation,” says Jean-Phillipe Chauzy the head of communications at IOM.

Hussein says that Nairobi is the central market from where girls are distributed to different parts of Kenya and to other countries.

“From Nairobi many girls are sent to Mombasa (Kenya’s international tourist destination along the coast) where underage girls are trafficked for sex tourism. They are taken to massage parlours or beauty shops, where contacts from tour operators and hotels come to select the ones they wish to take as sex workers in the tourism industry,” says Hussein

The head of Womankind Kenya says that these tour operators and hotel workers work as brokers and charge a fee of 600 dollars for young girls aged between 10 and 15 years who are mostly sold into sexual slavery. “The trafficked children are taken to secluded villas in Mombasa where sex tourism thrives,” says Hussein.

A report released in October by the International Peace Institute and the Africa Centre for Open Governance says the majority of people trafficked in East Africa are women and children who are sold into prostitution or forced labour.

The report says traffickers and smugglers prey on drought, poverty and conflict in the Horn of Africa to smuggle people to Nairobi and across the world with the promise of a better life.

“People are fleeing the hardship in their countries to settle in Mombasa and Nairobi, some move to Tanzania, Rwanda, Malawi and even to South Africa. Some want to get better jobs but end up in forced labour or sex slavery,” the programme officer at the advocacy and legal advisory centre at Transparency International, Fatuma Asaad, told IPS.

However, Kenya’s Permanent Secretary in the Ministry of State for Immigration and Registration of Persons, Emmanuel Kisombe, says Kenya has put in place effective legislation to curb trafficking. The Counter Trafficking in Persons Act was signed by President Mwai Kibaki in 2010.

“Under the law, trafficking in persons is now criminal and people involved in or convicted of the offence face a 30-year jail term and a fine of over 300,000 dollars,” says Kisombe.

But Kiura doubts that effective legislation will stop the trafficking. He told IPS that corruption permeates virtually the country’s entire security system and immigration departments meant to implement the law.

“These powerful people, including foreign diplomats and ministers in Kenya, have transformed access to foreign visas into a growth industry matched possibly only by piracy, selling visas for 10,000 to 15,000 dollars each to leaders of the networks,” the agent says.

The Provincial Police Officer in Coast Province, Aggrey Adoli, says 140 people are arrested weekly after being smuggled or trafficked into Kenya amounting to 7,280 arrests per year.

“This is just the tip of the iceberg since illegal immigration has increased in the recent past due to droughts and conflict,” Adoli says.