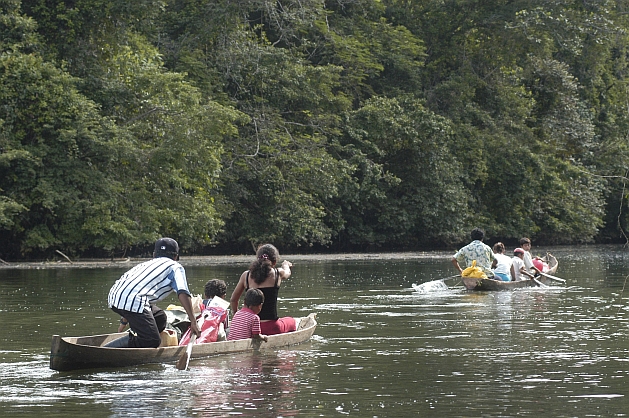 MEXICO CITY, Nov 28 2011 (IPS) - The foreseeable absence of binding agreements to stabilise the global climate could give rise to increased regional cooperation to help Latin American countries adapt to the severe effects of climate change.

A few initiatives have taken the first steps. But the results of the 17th Conference of the Parties to the United Nations Framework Convention on Climate Change (COP 17), taking place Nov. 28 to Dec. 9 in Durban, South Africa, could act as a catalyst for faster movement in this direction.

In August, Belize, Colombia, Costa Rica, the Dominican Republic, El Salvador, Guatemala, Honduras, Mexico, Nicaragua and Panama joined forces to establish the Intergovernmental Programme for Climate Change Cooperation-Opportunities and Challenges in Agriculture (PRICA-ADO), which seeks to create a scientific-technical network, build the capacities of national and regional agencies, and support governments in the design and implementation of public policies.

The changes already observed in the agricultural sector highlight “the need for land management and agriculture models with the capacity to foresee and adjust to these changes,” project leader Martha Alviar, a specialist in geomatics and land planning, told Tierramérica at the Mexican offices of the Inter-American Institute for Cooperation on Agriculture.

The Caribbean and Mesoamerica (southern Mexico and Central America) are particularly exposed to severe droughts and devastating hurricanes. Agriculture is impacted by changing patterns in the frequency and intensity of rainfall, alterations in soil conditions and variations in crop yields.

Central America, Mexico and northeast Brazil are among the regions for which there is “medium confidence” that droughts will intensify during this century, according to “Managing the Risks of Extreme Events and Disasters to Advance Climate Change Adaptation”, a special report approved by the Intergovernmental Panel on Climate Change (IPCC) on Nov. 18.

There is a 66 to 100 percent probability of increased maximum wind speed of hurricanes like the ones that form every year in the Caribbean Sea and the Gulf of Mexico, although it is also “likely” that the global frequency of tropical cyclones will remain unchanged or even decrease, the report states.

In 2012, PRICA-ADO will carry out a diagnostic assessment of the sub-region, based on agro-ecosystems, to develop units for management of adaptation actions.

“The definition and evaluation of agro-ecosystems, the generation of geo-prospecting scenarios and the formulation of public policies are the three dimensions through which the programme will foster collective decision-making and action by governments, scientists and agricultural producers in the countries involved,” said Alviar.

But a great many challenges lie ahead.

“The region’s institutions have not evolved sufficiently to tackle the challenges of adaptation or risk and vulnerability reduction,” Nelson Cuéllar, an economist from the Salvadoran Research Programme on Development and Environment (PRISMA), told Tierramérica.

There is a tendency in the region to address issues on a sector-by-sector basis, “and climate change cannot be confronted this way,” he stressed.

It is unlikely that COP 17 will adopt a binding agreement for the reduction of greenhouse gas emissions or a second period of commitments under the Kyoto Protocol, currently the only binding international agreement for climate change mitigation, whose original term will elapse in 2012.

Based on the view that the release of greenhouse gases through human activities is responsible for climate change, the Kyoto Protocol obliges the wealthy countries who have ratified it to reduce their emissions by 5.2 percent from 1990 levels. But this target will not be met by the protocol’s deadline of 2012.

In South America, meanwhile, there is no sign of a regional mechanism or forum to confront the climate drama, despite the torrential rains that hit Colombia and Venezuela this year, the increased melting of the glaciers in the Andes region, and deforestation in the Amazon region.

This is because “individualism prevails,” and the regional power, Brazil, “as a half-developed and half-developing country, is walking a tightrope, wanting to enjoy the benefits of both the Group of 77 and the developed countries,” Morrow Gaines, an expert on international climate change negotiations at the Brazilian non-governmental organisation Vitae Civilis, told Tierramérica.

Maureen Santos, a specialist in international negotiations at the Brazilian Federation of Agencies for Social and Educational Assistance (FASE), called for the creation of a fund for climate change adaptation projects within the Union of South American Nations (UNASUR), as well as a specialised meeting on the environment within the Southern Common Market (Mercosur) and other forums for regional integration.

Promoting debate on energy in Mercosur (made up by Argentina, Brazil, Paraguay and Uruguay) and UNASUR could contribute to the development of a regional climate change plan, she said.

In the past, she noted, numerous proposals from specialised Mercosur meetings have subsequently been adopted as regional policies. “Why not a meeting on the climate?” she asked.

For Gaines, who is also co-chair of the board of directors of the International Climate Action Network, the “most appropriate forum” for addressing climate change adaptation would be the Economic Commission for Latin American and the Caribbean (ECLAC), since it has already promoted discussions on the subject.

In the most vulnerable areas, such as Central America, there are government initiatives aimed at reducing damages.

On Dec. 16, El Salvador will host a meeting of the Consulting Group for Reconstruction, formed by the presidents of the Central American countries, to address the effects of the devastating rains these countries suffered in September and October.

“Much of what is done will depend on how much financing can be mobilised, although financing is not enough. There are institutional challenges that act as a strong impediment to the implementation of more integrated actions,” Cuéllar stressed

But money is also important.

Of the 30 billion dollars pledged by the wealthy countries for adaptation and mitigation measures, only 8.585 billion have actually been delivered, according to figures from the United Kingdom’s Overseas Development Institute. In Latin America, only Mexico and Peru have received funding for four programmes.

*The writer is an IPS correspondent. Additional reporting by Edgardo Ayala (El Salvador) and Mario Osava (Brazil). This story was originally published by Latin American newspapers that are part of the Tierramérica network. Tierramérica is a specialised news service produced by IPS with the backing of the United Nations Development Programme, United Nations Environment Programme and the World Bank.

** This article is one of a series supported by the Climate and Development Knowledge Network.