Q&A: “Gender Violence Is Not Natural and Not Inevitable” 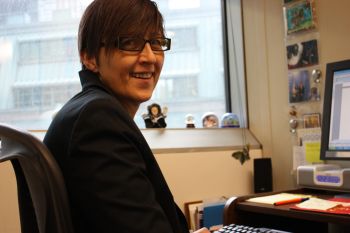 But as the issue has also risen on international security agendas, such as through the formal recognition of rape as a war crime, violence against women and girls remains a pervasive problem in nearly every society.

Aldijana Sisic has been the campaign manager of the United Nations Secretary-General’s campaign UNiTE to End Violence against Women since August 2010.

She joined the UNITE campaign from the position of communications and resource mobilisation specialist on ending violence against women at UN Women. Prior to her coming to the United Nations in January 2009, Sisic was the campaign manager for Amnesty International’s global Stop Violence against Women campaign.

At a recent panel at the United Nations on the problem of gender violence in rural communities, Sisic stressed that we have to “prevent and end violence against women and girls, because violence is not natural and not inevitable.”

“Everybody can suffer of violence, violence against women and girls is a violation of a human right and the work to prevent it and end it must become a top-level national concern,” she said.

Mathilde Bagneres talked with Sisic about the purpose of the UNiTE campaign and how such campaigns can make lasting changes for women.

Q: What are the main goals of the UNiTE campaign? A: Launched in 2008, United Nations Secretary-General Ban Ki-moon’s UNiTE to End Violence against Women campaign is a multi-year effort aimed at preventing and eliminating violence against women and girls in all parts of the world.

Overall objectives of the campaign are to raise public awareness and increase political will and resources for preventing and responding to all forms of violence against women and girls in all parts of the world.

The campaign also works to contribute to positive changes in the area of national legislations and action plans, collection and analysis of national data, use of sexual violence in conflict and social mobilisation.

Finally, by 2015, the campaign aims to raise an annual contribution of 100 million dollars to the UN Trust Fund to End Violence against Women.

Q: You said during the panel that thousands of women are still being killed in the name of “honour”. Does that mean that in some countries violence against women is considered as justifiable and natural? A: Violence against women and girls is severe, often hidden, and widespread. It has many different shapes and has no ethnicity, race or religion. It is a direct result of inequality and impunity, power, prejudice and apathy.

Violence against women and girls may be universal but it is certainly never justified, natural or inevitable. And, can without doubt be eradicated.

Q: What kind of actions can be taken on both international and local levels to end violence against women? A: At all levels we must continue to advocate for action and accountability. But, for real change to occur in women and girls’ lives, these have to take place at the local, community and national levels.

To create a future without violence, we must build societies that understand that violence against women and girls is wrong, and not part of a culture or way of living.

As professionals and leaders in our own communities, schools, work places etc. we all have opportunities to use our influence and responsibility to provide new generations with examples that they can learn and follow.

Q: Do you think that actions and campaigns such as UNITE can really make things change on the local level, also in terms of long-term norms and behaviors? A: Absolutely. Campaigns like the secretary-general’s campaign provide us with a powerful tool to challenge around the world those who would argue that culture, religion or national laws justify restricting women’s human rights.

They provide governments with benchmarks and standards that they can implement into law and policy. They provide a tool to hold governments to account and to measure their performance not simply by their own national standards and local resources, but by common internationally accepted rules.

They also provide society with a different paradigm and activists with a powerful framework for advocacy. Above all, they give women, victims and survivors around the world hope.