SOUTH AFRICA: Acid Mine Drainage Water Can Be Put to Use 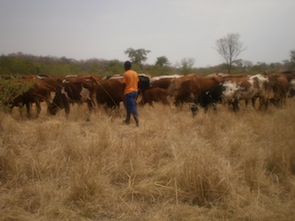 Water from acid mine drainage is unsuitable for human and animal consumption. Credit: Busani Bafana/IPS

KRUGERSDORP, South Africa, Nov 21 2011 (IPS) - Toxic water from derelict gold and uranium mines has reportedly destroyed Elize Strydom’s dream to be a farmer in her retirement.

Polluted waste from nearby mines spews onto her 160-hectare farm outside Johannesburg and she claims that this toxic water has left her with deformed livestock and barren fields.

Bought for her retirement 10 years ago, the farm is no longer a working one after surface water on it turned sour because of acid mine drainage (AMD), Strydom claims.

AMD occurs as a result of water from mining operations rising up as a natural run off above ground. The process is also a result of disused mine shafts flooding with water, and eventually rising above ground. This water is toxic because of high levels of salt and heavy metals, making it unsuitable for human and animal consumption.

“I used to call myself a farmer, I can’t anymore because I cannot farm,” Strydom told IPS. She has been forced to put her farm up for sale.

Strydom says she cannot afford to pay up to 1,400 dollars a month to buy “safe water” from Rand Water, the government water supplier, for her remaining cattle and horses.

“At this stage I have put adverts in magazines to sell off,” she sighed. “I think government is not prepared to do what they should do to solve the problem. My wish is clean water, that’s all. Clean water, clean water.”

According to Strydom, her animals started getting sick from the polluted water source five years ago and she has been forced to cut back on her livestock. From 100 cattle to 36 while she has reduced the number of Friesian horses to 32 from 36.

Action to tackle the AMD has been slow here. The first acid mine water came to the surface in the Witwatersrand, which was home to the largest gold deposits and mining operations in the world for more than 100 years, in 2002.

Currently, disused mines in the western basin of the Witwatersrand are estimated to be decanting 15 million litres of water a day, which is equivalent to six Olympic size swimming pools. Besides, a bigger challenge for both government and the mining industry is the cost of purifying the water to acceptable standards. Treating the water costs about 715,000 dollars a month.

In South Africa the “polluter pays” principle normally applies in cases where mining activities have polluted the environmental pollution. Mining houses could be held liable for compensation.

Senior Research Hydrogeologist from the Council of Scientific and Industrial Research’s Natural Resources and the Environment unit, Philip Hobbs, admits more could have been done to save the situation in the western basin, which includes Krugesdorp.

“It is imperative that the substantial body of scientific data and information generated in the last few years be communicated to stakeholders and interested and affected parties to demonstrate the better understanding of the water resources and the impact on these resources that now exists,” Hobbs told IPS.

“There is every hope that the threat posed by the AMD situation can be successfully countered and even turned into an advantage by developing the potential value of this water as an additional source of water in the heavily urbanised and industrialised economic heartland of South Africa,” Hobbs said.

Treated water from AMD could provide water to South Africa’s agriculture sector at a time when researchers say the country is running out of the resource.

An International Forum on Water and Food held in South Africa from Nov. 14 to 18 warned that climate change will alter the flow of water into Africa’s major river basins, including the Limpopo.

A study by the University of Pretoria from 2002-2009 has shown that the use of calcium- and sulphate-rich water can be used for agriculture with no adverse impact on soil or groundwater in the eight years of the study.

In Mpumalanga Province, the University of Pretoria was involved in a project using lime-treated water from coal mines for irrigation by farmers. The amount of water used differed from year to year due to the annual rainfall.

On average the crops, which included sugar beans, maize, wheat and potatoes, used up to 4,000 cubic metres of water per hectare per year.

“When social aspects like job creation, especially after mine closure, are considered, irrigation with certain mine waters on carefully selected and managed sites could form an important, cost-effective component of a long-term mine and catchment water management strategy,” senior researcher on crop and water relations at the Agricultural Research Council, Yacob Beletse, told IPS.

“However, it is crucial that long-term monitoring strategies around such irrigation areas be instituted to provide an early warning for unforeseen events from mine water use.”