WASHINGTON, Nov 10 2011 (IPS) - Frank Mugisha was just a young teenager in Uganda when he came out as gay. He faced bullying and threats, but he says the stories of lesbian, gay, and transgender friends he later met were much worse – some were kicked out of their homes by their families, subjected to sexual violence to “make them straight”, or arrested. 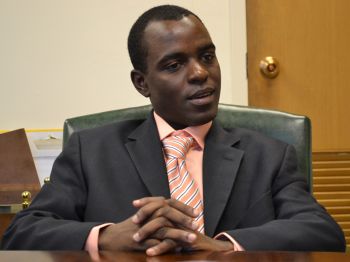 The activists provided their names and phone numbers for interviews and spoke out, sharing their personal stories. That campaign brought visibility to sexual minorities in a country where the government had, until then, denied their very existence.

On Thursday in Washington, Mugisha, director of Sexual Minorities Uganda (SMUG), an LGBTI organisation in the East African country, will receive the Robert F. Kennedy (RFK) Human Rights Award. The award recognises “an individual who stands up to oppression at grave personal risk in the nonviolent pursuit of human rights”, according to the Robert F. Kennedy Center for Justice and Human Rights.

The award marks the beginning of a six-year partnership in which the RFK Center will support Mugisha’s work and that of SMUG, a membership organisation working with 40 civil society partners in Uganda. This week, Mugisha and members of the RFK Center will travel to meet with prominent human rights groups, organisations, and members of the U.S. Congress to raise awareness about the situation of the LGBTI community in Uganda.

In a country where the government had maintained that sexual minorities did not even exist, the 2007 media campaign Mugisha organised with other members of the LGBTI community and their allies achieved an incredible first step for the country’s sexual minorities movement.

“It ended the myth that there are no homosexuals in Uganda,” Mugisha told IPS. “At least there is that acknowledgment that we exist.”

Activists in Uganda have also gone beyond visibility-building for sexual minorities to direct advocacy and political lobbying for rights for members of Uganda’s LGBT community. SMUG’s education initiatives promote understanding and acceptance of Uganda’s sexual minorities, who face discrimination in areas of life from education to health care.

The group also provides emergency response support for members of the community who have been arrested and seeks legal representation for them. It also educates on HIV/AIDS.

But an anti-gay law currently being reconsidered by Parliament would criminalise those health and education efforts as “promotion of homosexuality”. And although Uganda’s laws already criminalise homosexual acts – it is one of 70 countries worldwide where consensual homosexual conduct is punishable as a crime – the new law would make homosexual activities punishable by death in certain cases.

According to the RFK Center, 80 percent of Ugandans support the bill. The bill had earlier been shelved under international scrutiny, but on Oct. 25, it was reintroduced. Human rights organisations and governments around the world have vocally condemned the bill and voiced concerns that it could lead to more violence against Uganda’s LGBT community.

Gay rights activist David Kato, former advocacy and litigation officer for SMUG, was murdered in January of this year. He had received death threats after his name and photo were published by a Ugandan newspaper in 2010.

The timing of the introduction of the Anti-Homosexuality Bill in 2009 has been linked in news stories to visits to Uganda by U.S. ministers that same year.

“Then we had religious leaders coming from the U.S. in 2009 bringing words that we don’t understand,” Mugisha said, referring to concepts such as “ex-gay” and the idea that activists were “recruiting” others to be gay. “We are just gay people who want to be accepted and live in peace.”

Mugisha spoke Tuesday in Washington at a panel on sexuality and intolerance in East Africa hosted by TransAfrica, the Center for Constitutional Rights, SMUG, and the University at Buffalo Law School.

Makau Mutua, dean of Buffalo Law School and prominent human rights law scholar, also spoke at the conference Tuesday. He challenged the idea that homophobia had roots in Ugandan or African culture in general.

“When I was growing up there was no word for homosexuality,” Mutua said. “There is nothing that is inherently homophobic in African societies.”

Sylvia Tamale, a professor and legal scholar based in Kampala, Uganda, said the Anti-Homosexuality Bill was being used by both political and religious leaders for their own interests and that it was “being dangled like Damocles sword over the heads of LGBT citizens and activists in Uganda”.

She said the bill was being used to divert public attention from other issues in Ugandan society such as “skyrocketing unemployment, inflation, our health facilities”, Tamale said. “For weeks it becomes the issue on all the FM stations.”

But she asked members of the international community not to think of homophobia in Uganda and the struggle of the LGBTI community there as a problem exclusive to East Africa.

She added that she did not support aid sanctions against countries with anti-gay bills, such as those proposed by United Kingdom prime minister David Cameron in October, as she said it could “unleash a terrible backlash”.

Mugisha said Tuesday that the positive achievements of the LGBTI movement in Uganda gave him hope, but that much work remained.

“I tell people I am not so afraid of my government,” Mugisha said, adding that if he were arrested, people would likely protest. “But what about my neighbour? If we don’t change people’s minds, if we don’t end the ignorance about homosexuality in Uganda, the challenges will continue.”