CUBA-CARIBBEAN: Forging an Alliance to Fight for Climate Action 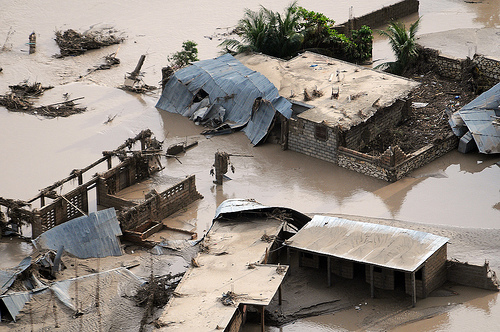 Aerial view of Port de Paix, Haiti after four storms in one month in 2008 devastated the island and killed more than 800 people. Credit: U.S. Navy

PORT OF SPAIN, Trinidad, Dec 9 2011 (IPS) - When the U.N. Conference on Sustainable Development dubbed Rio+20 convenes in Brazil next year, Caribbean leaders want to ensure that the concerns of vulnerable low-lying coastal and Small Island Developing States (SIDS) will be heard.

Closing a one-day summit of Cuba and the 15-member Caribbean Community (CARICOM) grouping Thursday night, Cuban President Raul Castro and his regional colleagues issued the “Declaration of Port of Spain”, affirming their support for the United Nations Framework Convention on Climate Change (UNFCC) as the primary intergovernmental forum for negotiating the global response to climate change.

“An appropriate response to this challenge should address mainly the roots of the problem and not only the consequences, as well as respect the principles of the Convention, in particular the principle of common but differentiated responsibilities and the states’ respective capacities,” it said.

“In this sense, underline the importance of mitigation as part of a balanced and ambitious outcome of international negotiations on climate change, including a decision on establishing the second commitment period under the Kyoto Protocol (to regulate greenhouse gas emissions).”

However, as a key U.N. climate change summit in Durban, South Africa enters its final hours this weekend, hopes have largely withered that any meaningful deal for a successor to Kyoto can be reached.

The cost of inaction

Recent studies by Cuban scientists show that by 2050, there will “severe economic consequences” for the Caribbean region as a result of rising sea levels, Castro said. By that year, 23 percent of Cuba’s land mass could be permanently submerged.

The region would also face stronger hurricanes, floods and droughts.

The Declaration commits to strengthening environmental protection and the “sustainable use of our natural resources, especially our precious and unique shared resource, the Caribbean Sea.”

It also stressed that the global financial and economic crisis “is not over” and that recovery is “uneven and uncertain”.

“The systematic problems facing the global economy have to be resolved, including through the full accomplishment of a fundamental reform of the global financial system and architecture,” the statement said.

CARICOM Chairman Dr. Denzil Douglas, who described the deliberations here as “very successful”, lauded Cuba’s aid programmes, notably in the areas of health and education, and expressed hope that Havana would “ease the restrictions” to allow CARICOM nationals to travel to Cuba for medical treatment.

“At a time when there is so much challenge from the global economic situation…here is a relatively small country still extending its hand of friendship in a number of critical areas,” he told reporters.

Cuba has also offered assistance in addressing the small arms trade and other trafficking.

The Declaration noted with “deep concern the continued threats posed by the illegal trade in narcotics and small arms and light weapons, the growing phenomenon of trafficking in persons and the consequent impact that these phenomena have on development efforts and social welfare of the people of the region.”

It pledged to comply and enforce the 2001 Programme of Action to Combat and Eradicate the illicit Trade in Small Arms and Light Weapons, which will be the topic of a United Nations review conference next year.

However, in a clear dig at the United States, Caribbean leaders complained that despite their “strongest commitment” to fight the illegal drugs and arms trade, their efforts are being “frustrated by the increasing demand of illegal drugs in major consuming countries and by the failure in those countries to also control the supply of small arms and light weapons”.

The declaration also renewed a commitment to “south-south cooperation and regional cooperation specifically as one of the central strategies for confronting the challenges to the sustainable development and welfare of our peoples posed by the volatility of the current international environment particularly in the areas of food security, nutrition and energy”.

Anger at the U.S. over embargo

In a separate statement, the leaders expressed their outrage at the decision of the United States not to grant a license that would have allowed the summit to have taken place at the Hilton Trinidad hotel.

“This is a unilateral and unwarranted extra-territorial application of the United States Helms-Burton law which is contrary to the United Nations Charter and to international law. It also flies in the face of the annual overwhelming rejection of this policy by the United Nations General Assembly,” the “special statement” noted.

The Helms-Burton Act is a U.S. federal law which strengthens and continues the decades-old United States trade and economic embargo against Cuba.

The act extended the territorial application of the initial embargo to apply to foreign companies trading with Cuba and penalised foreign companies allegedly “trafficking” in property formerly owned by U.S. citizens but expropriated by Cuba after the Cuban revolution. The act also covers property formerly owned by Cubans who have since become U.S. citizens.

Douglas, who is also the prime minister of St. Kitts and Nevis, told IPS that the statement would be sent to the U.S. State Department and that the Helms-Burton Act attempts to “stifle the sovereignty and the rights of sovereign nations to associate and do business.

“Also to a large extent it speaks to the continued the commercial, economic and financial embargo that has been instituted against Cuba which the world basically has been saying has to come to an end,” he added.