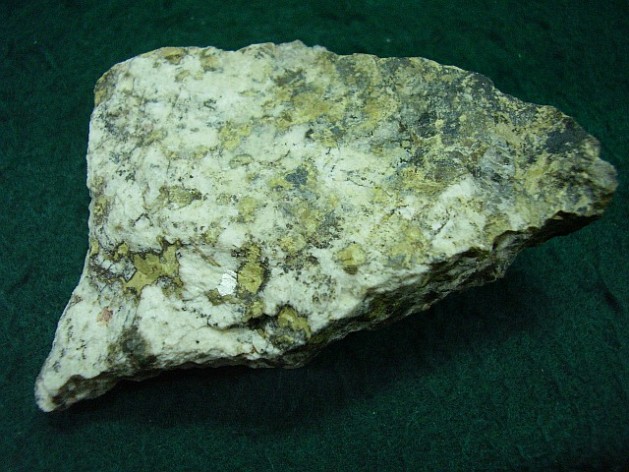 Rare earth-bearing rock from Argentina displayed in the Mineralogy Museum at the University of Buenos Aires. Credit: Juan Moseinco/IPS

BUENOS AIRES, Dec 21 2011 (IPS) - Argentina could meet part of the rising world demand for “rare earth” metals, required for a variety of green technologies, advanced electronic devices and medical diagnostic equipment. The challenge lies in mining them in a sustainable fashion.

Considerable expectations have been created in the South American country around this group of 17 metals, called “rare” because they are found in relatively low proportions in rock and sediment and rarely exist in pure form.

Rare earth elements (REEs) like dysprosium, lanthanum and neodymium are key components in the manufacture of widely used devices such as mobile phones, laptop and tablet computers, MP3 players and digital cameras, as well as green tech innovations including wind turbines and hybrid cars.

The world’s biggest producer of rare earths is China, which accounts for 97 percent of the global supply of these metals. But the Chinese government’s decision to restrict production and exports to favor domestic manufacturers has driven up prices and fueled a search for alternative sources.

Rare earths are sometimes found in proportions of just a few parts per million in rock and sediments, and scarce concentrations like these make their extraction economically unviable, explained geologist Diana Mutti, director of the department of mining geology at the School of Exact and Natural Sciences of the University of Buenos Aires.

The highest concentrations of these metals are found in certain regions of China, the United States, Canada and Russia, Mutti told Tierramérica. But there are also significant deposits in some provinces of Argentina.

“There is potential for rare earths in the mountains of Córdoba, San Luis (in central Argentina), Salta and Catamarca (northwest). They may be found in the rock there in larger proportions, but not necessarily enough to constitute a mining reserve,” she noted.

For the moment, the province of San Luis is where the country’s largest concentrations of rare earths have been found.

According to Mutti, in the northern Argentine province of Santiago del Estero “there are similarities with the rock in the mountains of Córdoba, but the threshold for concluding that there is potential has yet to be crossed.”

“There are indications, but not a manifestation,” she specified.

Mutti was alluding to the expectations raised over activities in the mountains of Sumampa in Santiago del Estero undertaken by subsidiaries of another Canadian company, U308 Corp., which were confirmed by an industry association.

Julio Ríos Gómez, president of the Exploratory Mining Companies Group of Argentina, declared that international companies have placed the country “among the richest areas in the world in terms of the availability of this resource.”

Ríos Gómez reported that requests for authorisation of rare earths exploration have been submitted by companies from Australia and Canada, largely as a result of China’s cuts in export quotas since 2010.

In the Sumampa region in southern Santiago del Estero, he told a press conference, “there are companies exploring for rare earths, and there is a plan to reactivate the entire mining industry in the province, where there are no laws that limit extraction.”

Neither Ríos Gómez nor the Foundation for the Development of Mining in Argentina – which claimed to have “little information” about rare earths – responded to requests for an interview with Tierramérica.

But not everyone welcomes exploration for these rare metals.

According to residents of Jasimampa, a community near the mountains of Sumampa, individuals who said they work for Gaia Energy Argentina SA tried to convince them of the benefits of mining activity in the region.

Gaia Energy is fully owned by U308 Corp. of Canada, which specialises in uranium mining.

“The company forced its way onto lands that are collectively used by the whole community, with the assistance of the police, and the community resisted. There were even arrests,” reported Adolfo Farías, a leader of the Campesino (Peasant Farmer) Movement of Santiago del Estero (MOCASE).

“Gaia went in trying to confuse people, talking about the progress that mining brings and the employment it creates, they claim, but they were met with mobilisation and resistance, and the project was halted,” Farías told Tierramérica.

And the indigenous peoples and small farmers in the area “will continue their resistance,” said Farías. “Our goal is food sovereignty and the protection of our natural resources from plundering,” he stressed.

“We know that there are rare earths in Sumampa, and that the company has a strategy to exploit them, but we are opposed, because we know it will contaminate the water and it won’t create jobs like they say it will,” he added.

Another subsidiary of U308 Corp., South American Rare Earth Corp., has also acquired property in Jasimampa for rare earth exploration.

Mutti explained that the method used to extract the metals depends on the rock containing them. If it is exposed, they are usually extracted through strip or open-pit mining. But since the rock formations in question are no larger than 50 by 10 metres, they would entail small-scale operations.

Underground mining is also a possibility, but given the bigger investment required, the operation would have to be highly profitable, she noted.

In her opinion, rare earth mining “is fairly sustainable in general, but we know that any activity has an impact on the environment.”

“In this case they would not use cyanide and there would be no production of acid water. But there would be some impact on the landscape, on the flora and fauna of the area, and on soil movement,” she said. There could also be explosions, landslides and collapses, she added.

Mutti recommended evaluating how these impacts would be mitigated, and whether the extraction of these resources generates more sustainable alternatives and cleaner development in the production chain.