GUATEMALA CITY, Dec 27 2011 (IPS) - Relatives of former military personnel and businessmen are bringing lawsuits against ex guerrillas and journalists in Guatemala in connection with the 1960-1996 civil war – a legal offensive that human rights defenders say is politically motivated. 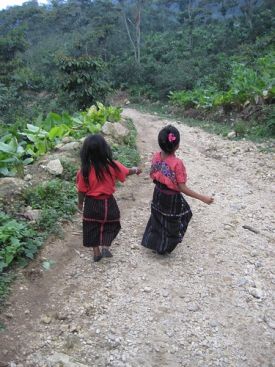 Native men, women and children - like these girls from the highlands - were the main victims of the army during Guatemala's civil war. Credit: Roots and Wings International/CC BY-ND 2.0

“I studied two of the lawsuits filed by ex military personnel, and their legal basis is very thin. Evidently the plaintiffs want to transform themselves from perpetrators to victims,” Ramón Cadena, a representative of the International Commission of Jurists, an NGO working for the rule of law for human rights, told IPS.

“They are also seeking to criminalise various professionals, who today are working for peace, for the work they do as journalists or human rights defenders,” he said.

The armed conflict between Guatemalan security forces and leftwing guerrillas left 250,000 people dead or disappeared, most of them rural indigenous villagers, with the army being responsible for 93 percent of the crimes, according to the United Nations-sponsored Historical Clarification Commission (CEH).

But the battle continues, now in the legal arena.

Just a few days before the Dec. 29 commemoration of the 15th anniversary of the signing of the peace agreement that ended the armed conflict, the law courts received three lawsuits against ex guerrillas and human rights activists.

One of them was filed Nov. 2 by businessman Ricardo Méndez against 26 former members of the now-defunct Guerrilla Army of the Poor (EGP) and Guatemalan Labour Party (PGT), insurgent groups active during the war, whom he alleges kidnapped and tortured him 29 years ago.

The third lawsuit was presented Dec. 12 by U.S. coffee businessman Theodore Plocharski against 52 former insurgents, accusing them of the kidnapping, torture and murder of diplomats, including the 1968 assassination of John Gordon Main, then U.S. ambassador in Guatemala.

Among the accused is Yolanda Colom, the sister of outgoing social democratic President Álvaro Colom, and Margarita and Laura Hurtado Paz, relatives of Attorney General Claudia Paz y Paz, who is in charge of criminal prosecutions.

Human rights activist Iduvina Hernández and journalist Marielos Monzón are also named as defendants in the lawsuit. They presented themselves to the Attorney General’s Office to clear their names.

“It is perfectly well known that I have never belonged to any political or guerrilla organisation nor ever committed any crime; I am being accused of these things in order to cast aspersions on my character and so prevent me from working in my profession and publishing opinion-editorials,” said Monzón, who has defended access to justice for victims of the counterinsurgency war.

In the view of Magdalena Sarat, of the National Coordination of Widows of Guatemala (CONAVIGUA) – an NGO working for the rights of indigenous Maya women who lost family members in the civil war – the legal offensive carried out by allies of the armed forces is a strategy “to silence the survivors of the internal armed conflict so that they will stop denouncing the abuses committed by the army.”

Sarat told IPS, “This is revenge because some cases of genocide and military personnel responsible for the massacres have been prosecuted, thanks to the Attorney General’s work.”

The Attorney General’s Office has secured the arrest and conviction of a number of military and police officers who were found guilty of genocide, forced disappearance and other abuses against civilians during the war.

In 2010, two former police officers were sentenced to 40 years in prison for the Feb. 18, 1984 forced disappearance of Fernando García, a university student and trade unionist.

This year’s arrests included those of retired general Héctor López, accused of genocide in the massacres of over 300 persons between 1978 and 1985, and former chief of police Héctor Bol, for the disappearance of García, as well as other members of the armed forces facing prosecution.

But Sarat said “the highest ranking military commanders, responsible for massacres of the indigenous population, are still at large, like general Efraín Ríos Montt” (1982-1983), who is accused of carrying out a scorched earth policy that involved the wholesale destruction of some 440 villages.

“And yet we see him going about free and easy, without a care in the world, after they left thousands of widows and orphans,” she said.

Sarat acknowledged that crimes committed by the guerrillas during the war should also be cleared up, but she emphasised that the army is to blame for 93 percent of the human rights abuses perpetrated during the war, compared to just three percent attributed to the guerrillas, according to the CEH.

Héctor Nuila, a lawmaker of the leftwing Guatemalan National Revolutionary Unity, formerly a coalition of guerrilla movements and now a political party, told IPS the lawsuits brought against ex insurgents, journalists and activists “are politically motivated.”

He said part of the strategy is to seek the removal of Attorney General Paz y Paz, who has succeeded in getting several military officers arrested and convicted for abuses committed during the conflict.

“The plaintiffs have publicly stated that the competence of the attorney general is on trial. Moreover, they have accused people of crimes that were committed before they had even been born, and have accused people who happen to have worked very hard on strengthening the security and justice systems,” Nuila said.

“Members of the army are being prosecuted for war crimes. Now the Attorney General’s Office should investigate the criminal acts committed by the guerrillas,” Plocharski told the media.