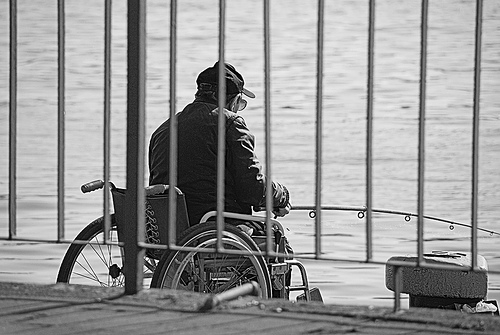 Simple solutions can make an enormous difference in accessibility. Credit: Dominik Golenia/CC By 2.0

WASHINGTON, Dec 2 2011 (IPS) - As the International Day for Persons with Disabilities approaches this Saturday, one institution is working to remove some of the barriers that prevent disabled people from taking a leading role in policies that affect their lives.

Simple solutions can make an enormous difference in accessibility. Credit: Dominik Golenia/CC By 2.0

The Institute on Disability and Public Policy (IDPP), offering the world’s first virtual master’s degree on disability studies and public policy, is geared specifically toward those with disabilities, adapting innovative technologies to make the degree accessible.

The lack of inclusion for persons with disabilities (PWD), which the World Health Organisation estimated totals one billion people worldwide, extends beyond the built environment, where issues of accessibility are rampant in both the developing and developed world. The lack of inclusion for PWD is also seen in representation, among policymakers who determine the political and social framework in which PWD live.

The IDPP seeks to integrate these two concepts, enabling those with disabilities to advocate for and communicate their rights on a level playing field, providing them with an educational background in public policy through a Master’s of International Affairs in Comparative and International Disability Policy.

The IDPP, which has been in development since 2009 but is in its first year of instruction, is largely the product of the Center for Research on Collaboratories and Technology-Enhanced Learning Communities (COTELCO), a joint social science research center at American University and Syracuse University.

COTELCO’s director, Derrick Cogburn, said that the model of the programme could eventually be adapted for other subject matters, but currently serves a crucial function in tackling a stigma and changing the course of development.

“The overall goal is developing a cadre of leaders who can address public policy,” Cogburn told IPS. “A human capacity that could represent themselves in the issues that matter to them.”

The development of a graduate institute better equips those with disabilities to interact on the policy development level, Cogburn told IPS, and receive a degree that might otherwise have been a challenge to obtain.

Three deaf, three mobility-impaired, and four blind students make up the inaugural cohort of the one-year programme, which began in September. The 10 students are based throughout the ASEAN region, and attend the virtual programme via fellowships made possible by a grant from the Nippon Foundation, which cover all related costs.

Cogburn, also an Associate Professor at American University’s School of International Service in Washington, D.C. where the degree is housed, said that the goal was to expand the programme to more students, eventually an annual cohort of 25 students, and eventually to other regions, such as Latin America and Africa.

This year’s International Day for Persons With Disabilities, a U.N.- recognised day on Dec. 3, will focus on including PWD in development, following the U.N. Convention on the Rights of Persons with Disabilities, which states that every citizen has the right to freedom “without distinction”.

“The U.N. has led the development of a new global framework for persons with disabilities,” Cogburn told IPS. “It’s helping to change the context of human rights for disabilities not as political, but as a social justice issue.”

Luis Gallegos, former ambassador from Ecuador and chair of the U.N. Global Partnership for Inclusive Information and Communication Technologies, in a demonstration of the IDPP’s web conferencing tools on Friday, said that “a new type of development is extremely important”.

“How should we change the structures of government and of society? Because this is not just talking about government institutions, but a change in society,” he said.

Challenges still exist in mainstreaming disability in the political discussion, however, and this is largely because of a lack of awareness or promotion of disability-inclusive development.

“We need policies that reflect that, but also that enforce it,” Cogburn told IPS. “A nice principle won’t change the life of a person on the ground.”

In order for there to be change on the ground, however, foresight is needed in the design and implementation of policies – in the built- environment, for example, where ramps are favoured over stairs.

Though issues of accessibility and infrastructure may seem exclusive to remote and lesser-developed areas, there are significant challenges anywhere where the infrastructure is older – and this, Cogburn said, could provide for a bigger opportunity as regions are developed and maintained.

“It’s less about accessibility, and more about universal design,” Cogburn told IPS. “Thinking about the built environment, there are a range of issues that make it easier.”

And the inclusion of those with disabilities in the formation and implementation of these policies would only increase their relevance, particularly because those without disabilities may not realise just how simple solutions can be to make an enormous difference in accessibility.

“These efforts have to be led by persons with disability,” Gallegos said. “They led the thrust to this U.N. convention, and they are the ones who will take this further on, and help us to look at disability as a pro, rather than a con.”

In the development of the programme’s curriculum, several factors had to be taken into consideration, but the cyber infrastructure for the programme was perhaps the most crucial component to the programme’s effectiveness for those who they intended to reach – the physically disabled.

The development of the programme’s technological prototype was built around the issue of accessibility: be they for impairments to vision, hearing, or mobility. This includes recognising the bandwidth that students would be remotely using, and therefore working from the lowest common denominator.

The IDPP and COTELCO also looked to develop specific technologies, such as an advanced screen reader for the visually impaired, and built in real-time closed-captioning and sign language interpretation.

The programme uses an open-source content management system as the foundation for the virtual degree, and a virtual portal for classrooms and related work, putting all of the information on classes, from course readings to lectures, in one place.

Activists for the rights for persons with disabilities have weighed in throughout the fight to increase awareness of the issue, as Gallegos reiterated after his comments on Friday.

“In every person with a disability are activists in the realm of civil society,” Gallegos said. “Working to have society change its views, its perception, of those with disabilities.”