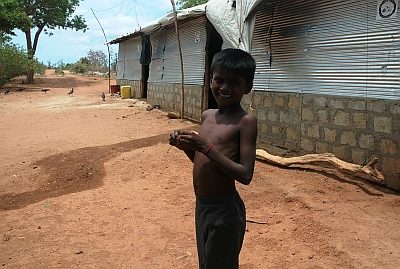 Children living in Sri Lanka's tea estates are among the country's most malnourished. Credit: Amantha Perera/IPS

But, beneath that general picture of success lie pockets of vulnerability where poverty and lack of awareness are causing high levels of malnutrition in this country, classified as a middle-income country by the International Monetary Fund in 2010.

According to a November 2011 paper released by the Institute of Policy Studies, a semi-government research body, a fifth of children under the age of five suffer from malnourishment, as also every sixth newborn.

“This is a fairly high rate,” Angela de Silva, lecturer at the Colombo University and a vice-president of the Nutrition Society of Sri Lanka, told IPS. She said the high rates of malnourishment were primarily “due to certain pockets with high levels of underweight.”

“Overall, there has been an improvement in underweight over the years and, for most areas, underweight is not a huge problem. But the government’s (most recent) demographic and health survey (2006-2007) indicated that certain areas were badly off,” de Silva said.

One of the areas identified by the Institute’s report was the Nuwara Eliya district, famed for its tea plantations. “Children in the estate sector are twice as likely to be underweight than children in the urban sector,” said the report titled ‘Eradicating malnutrition in Sri Lanka, looking beyond health’.

Around five percent of Sri Lanka’s 21 million people are from the plantation sector – descendants of workers brought from south India in the 19th century by British colonialists to work in the tea plantations.

The research paper said that one in three children under the age of five was underweight in the plantation sector and 40 percent of newborn babies had low birth weight.

The main reason for these levels of high undernourishment appears to be poverty. According to the government’s indicators, at least 11 percent of the plantation population lives below the national poverty line of 27 dollars per month.

The research paper said that over 60 percent of the same population was categorised as poor.

“Evidence from many countries has proved that poverty plays a large part in malnutrition as access to resources will reduce food insecurity in a household,” said Kumari Navaratane, a public health specialist with the World Bank.

Nutrition levels are also low among the tens of thousands of people returning to north after the end of the civil war that pitted separatist Tamil militants against government troops, according to de Silva.

An assessment carried out by the World Food Programme in August 2011 revealed that at least 60 percent of the war returnees in the northern province were food insecure.

Navaratane and de Silva stressed that one vital area that impinged on child malnutrition was the education level of the mother, the primary caregiver, and knowledge of matters relating to healthy hygiene.

In the estate sector, awareness remains low. The Institute of Policy Studies paper said that nearly half of women in the reproductive age in this sector had not finished primary level education.

“Poor education reduces the ability of mothers to benefit from the awareness programmes on family health and hygiene,” the paper said.

Sri Lanka has a successful programme of encouraging breastfeeding in the first six months with over 90 percent of newborns breastfed, reducing the risk of malnourishment and improving child immunity.

The problem starts thereafter, especially in vulnerable pockets like the plantations. “You will see that usually a child gets malnourished after the period of exclusive breastfeeding period of the first six months,” de Silva said.

Poor feeding practices, such as giving the child food with inadequate energy density, following myths and practices that deny the baby certain foods, especially animal products, and lack of variety in the diet are to blame, de Silva said.

Poverty and low levels of awareness can combine to create a vicious cycle of intergenerational malnutrition, she said.

“If a low birth weight child does not receive adequate nutrition the child’s growth potential is not reached and when the girl child is underweight her body is not able to produce a good weight baby,” World Bank’s Navaratane said.

There are ongoing interventions that are being fine-tuned to target these vulnerable pockets, de Silva said.

The National Nutrition Council headed by the president has in fact launched pilot projects to fight malnutrition by adopting an integrated approach to health and other vital sectors like agriculture and education.

Experts like de Silva and Navaratane agree that the best option is to target those communities identified as vulnerable.