Anger Boils Over as Ranks of Jobless Youth Swell

WASHINGTON, Feb 7 2012 (IPS) - When images of North London’s gutted and burning buildings, broken shop windows and refuse-lined streets appeared on TV screens and front-page headlines during the four-day Tottenham riots last August, many dismissed the damage as the work of “hoodlums” and “delinquents”. 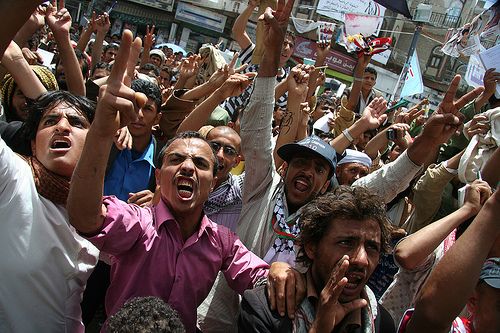 What most media failed to mention – and continues to ignore – is that riots such as those that wracked England from Aug. 6-10 sprang largely from a deeper problem: a global youth unemployment epidemic that has left millions of young people jobless, excluded and increasingly frustrated.

According to the World Youth Report released Monday by the United Nations Department of Economic and Social Affairs (UNDESA), worldwide youth participation in the labour force has been in relatively sharp decline, slipping from 54.7 percent in 1998 to just 50.8 percent a decade later.

The year 2009 saw the highest level of youth unemployment on record since the International Labour Organisation began collecting such data almost 20 years ago, with 75.8 million young job seekers without gainful employment.

The combined burden of a youth bulge and shrinking job market falls most heavily on the developing world, which is home to 87 percent of the world’s youth, most of whom are often underemployed or working in the informal economy under poor conditions.

Today, about 152 million young workers live in households that are below the poverty line of 1.25 dollars a day, comprising 24 percent of the total working poor. For these young people – often heads of households – unemployment is more than a “social ill”; it is a matter of life and death.

Two-thirds of the Arab world is under the age of 30. A third of Africa’s total population (roughly 331 million people) is between the ages of 15-25. Since 40 percent of Africa’s population is under 15 years of age, this number will increase significantly in the coming decade.

Meanwhile 62 percent of the world’s 1.2 billion youth live in Asian countries where at least a third of the population exists on less than two dollars a day.

The report relied heavily on inputs from over 1,100 youth leaders and organisers across the world who were invited to share their opinions on the labour market and their prospects within it via an online consultation form.

“A keen observation of the massive rallies and demonstrations during 2011 clearly shows a lot of similarities, not only of the social media and web tools (used) to mobilise millions of dissidents but of the common goals and frustrations that erupted those rallies in Tahrir Square, Wall Street, London, Chile, Spain, and so many cities all over the world,” 28-year-old Emad Karim, a youth contributor to the report and a senior programme specialist at the Etijah youth and development consultancy institute in Cairo, told IPS.

“We are witnessing a new young generation – more well-informed, closely connected, and globally inspired than their parents and those in power. This generation can no longer be easily taken to war, bear even a soft dictator or accept racism. They are calling for an entire restructure of our social, economical, political, and educational policies and organisations to respond to their bigger aspirations and passions.”

It should come as no surprise that these very “passions” fired the ongoing Arab Spring in the Middle East and North Africa. But a closer look at unemployment trends in the region raises the question of why the uprising took so long to come.

The total youth unemployment rate in 2010 was 25.5 percent in the Middle East and 23.8 percent in North Africa. Female youth employment in these regions was particularly striking, at 39.4 and 34.1 percent, respectively.

Highlighting the fact that unemployment does not stem solely from poor education, the report noted that the developed world plays host to scores of jobless youth, many of whom are considered the “educated unemployed”.

Nor is joblessness simply an offshoot of under-development, limited exclusively to the third world. Europe too is rife with it.

Eurostat estimates that youth unemployment is a staggering 48.7 percent in Spain, 47.2 percent in Greece and 35.6 percent in Slovakia.

“Learning institutions should focus more on technical skills than just theory so that us young people acquire (practical) knowledge,” Ayshah Maende, a 27-year-old Kenyan participant in the e-discussion, told IPS.

“In 2002, three percent of Turkey’s population was living on two dollars a day or less. By 2011, that number was down to 0.2 percent of the population, with the Gini coefficient (the measure of a country’s gap between the richest and poorest people) constantly on the decline.”

Babacan pointed out that Turkey’s system of state-subsidised apprenticeships for students leaving educational institutions shift the financial burden off employers, while simultaneously providing a safety net for youth entering the job market.

Though the report called for better communication between youth and the private sector, many believe that nothing short of an overhaul of the existing system could work.

“In Egypt, after the 2011 revolution and a year of sacrifice, with the death and permanent injuries toll increasing every day, the frustration is much higher with less jobs and more injustice,” Karim added.

“Young Egyptians rebelled against an oppressively corrupt regime that violated their rights in the name of democracy and human rights. Now, they are facing a newly elected old style leadership that…does not reflect their actual needs as the majority of the population.”

“If (major changes) don’t happen soon we are risking an intergenerational conflict that will not appear as a conflict between parents and their young children but will appear in the form of reconsidering (all) the old notions of our entire economic, healthcare, education, security, justice, media, culture, and environmental system,” he stressed.

Indeed many economists have echoed the claim that the old neoliberal paradigm of “economic growth” – represented by better education, more jobs and higher GDP growth – will not solve the jobs crisis.

“People will rebel against inequalities even if (their countries) are supposedly experiencing ‘decent economic growth’, as was the case in Tunisia,” Omar Dahi, professor of economics at Hampshire College, told IPS.

“Neoliberal globalisation, with its trinity of liberalisation, deregulation, and privatisation, has not delivered, and instead has exposed the most vulnerable populations to the vagaries of international markets and rising commodity prices, while making countries more and more desperate for attracting foreign investment,” Dahi said.

“Economic growth, even when it can be achieved through the private sector, is meaningless if it comes without meaningful social inclusion,” he added.