CARACAS, Feb 3 2012 (IPS) - A radical political group based in a working class neighbourhood of the Venezuelan capital has sparked a furore by publishing photographs of children from the community, with their faces partially hidden, brandishing AR-15 assault rifles. 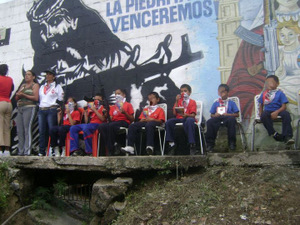 Children with rifles photographed in front of a mural of Christ carrying a machine gun. Credit: Colectivo La Piedrita

The group in question, the La Piedrita Collective, controls the 23 de Enero parish in Caracas, a neighbourhood that has been a leftwing stronghold for decades and is where President Hugo Chávez – whom the collective claims to support – casts his vote during elections.

Photographs posted on internet social networks Jan. 29 show youngsters participating in a public event, alongside adult men and women, wielding assault rifles in front of murals of famous guerrilla fighters, as well as one depicting Jesus Christ armed with a similar weapon.

On numerous occasions in recent years, the La Piedrita Collective has released pictures of its members, sometimes masked, openly carrying guns in public. It has also claimed responsibility for tear gas grenade attacks on the headquarters of media outlets, the Catholic Archbishopric, the Caracas Athenaeum and the Christian-Democratic opposition party COPEI.

There is an outstanding warrant for the arrest of the group’s top leader Valentín Santana, accused of homicide, and Chávez himself ordered Santana’s arrest during a 2009 television programme.

But the order has never been carried out, and Santana is reported to have been in attendance at a public event held in the parish this January by the ruling United Socialist Party of Venezuela (PSUV).

Minister of Interior and Justice Tarek El Aissami stated that the government “rejects and condemns the handling of guns by children and adolescents,” something it considers unacceptable because it “violates the moral principles established in the constitution and threatens the integral development of our children.”

El Aissami ordered an investigation to determine who is responsible for the pictures of the armed children, some of whom appear to be as young as five years old.

The Public Prosecutor’s Office has also instructed the Department of Family Protection to open an investigation “to determine both the veracity of the events and the individuals responsible, and to take action accordingly.”

Pablo Fernández, technical secretary of the recently created Presidential Commission for Firearms Control and Disarmament, said that what was most troubling about this incident was the “grotesque, irresponsible and immoral” way in which children were used.

He stressed the need to establish the responsibility of the adults who organised the event at which the photographs were taken, as well as those who took the photographs, whatever their intentions, because “children as young as these have little understanding of how they are being used.”

Fernando Pereira, co-director of CECODAP, a Venezuelan NGO that works for children’s rights, told IPS: “This affair needs to be clearly addressed. What we hear from mothers and fathers on the streets is that they want to see concrete evidence of political will to protect children and adolescents, and that violence must not be condoned.”

Pereira added that spreading images of children with guns was like “adding fuel to the fire of the already well-known problem of violence.”

In Venezuela, with a population of 29 million, a million and a half crimes and 19,000 homicides are recorded annually, according to CECODAP.

El Aissami, while not specifying the actual number of slayings that year, reported in late 2011 that the murder rate in the country was 48 per 100,000 population.

Every month, around 100 children and adolescents in Venezuela fall victim to violent death, says CECODAP.

Different NGOs offer varying statistics regarding the number of firearms illegally in the possession of the general population, with some claiming the total to be in the millions.

Rocío San Miguel of the Citizens’ Watch for Security, Defence and the Armed Forces told IPS that the AR-15 rifles shown in the photographs, manufactured by ArmaLite of the United States, “have been used by the political police, and its chief, general Miguel Rodríguez, should explain how they came to be in the possession of those who are using them in 23 de Enero.” Rodríguez is the head of the Venezuelan intelligence service.

San Miguel stressed that Venezuela is a signatory to international agreements that prohibit the participation of children in armed groups, in addition to national legislation adopted to ensure respect for the rights of children.

Under the Law for the Protection of Children and Adolescents, it is illegal to provide minors under the age of 18 with access in any way to tobacco, alcohol, illicit drugs or pornographic material. There is also a law to protect minors from exposure to war-related toys and videogames, as well as to messages that promote hatred or violence.

“Any adults who endorsed this incident through their presence are directly responsible both morally and criminally. They should have been arrested immediately, because they are completely identifiable,” sociologist Luis Cedeño of the NGO Active Peace commented to IPS, adding that the government needs to ensure that these arrests are made in order to clearly distance itself from the incident.

After the scandal erupted, some of the women who appear in the photographs with the armed children released a video filmed in a classroom with the young pupils holding up books on Venezuelan history and the country’s constitution, in which they state, “These are the weapons we give to our children.”

The La Piedrita Collective also acts as a “consejo comunal” or community council, a local organisational body created by the government to fund community services. In this capacity, it operates public transport vehicles, a brick factory, sports fields and an ambulance.

In June and July 2011, when heavily armed prisoners rioted for three weeks in a penitentiary near Caracas, congressman Diosdado Cabello and a La Piedrita Collective member who identified himself to the media only by his alias, “Satanás” (Satan), acted as mediators between the prisoners and the government to resolve the conflict.

Cabello, the president of the National Assembly (Congress) since January and vice president of the PSUV, declared on the day after the photographs appeared, “We totally and utterly condemn the use of children in this way.

“The people responsible for this are doing a great disservice to the revolution,” he stressed. “The president has tirelessly repeated that this is a peaceful revolution, that it does not use weapons, which are solely used by the armed forces.”

Opposition leaders, especially those vying to be chosen as candidates for upcoming presidential and local Caracas elections, have not only loudly condemned the actions of the La Piedrita Collective, but have also accused the government of tolerating, encouraging and even supplying weapons to this kind of group.

Campaigning is already under way for the presidential elections scheduled for Oct. 7. The opposition coalition, Mesa de la Unidad Democrática (MUD), will choose its candidate from among five hopefuls in primary elections to be held Feb. 12.