MOGADISHU, Feb 14 2012 (IPS) - As Somalia’s transitional government and various stakeholders meet Wednesday to discuss the inclusion of the country’s clans in the new government, women politicians have called for a greater role in the leadership of this East African nation. 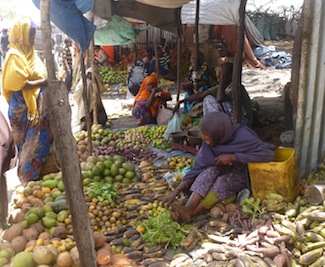 Most Somali women have to provide for their families as the country’s female politicians call for greater representation in parliament. Credit: Shafi’i Mohyaddin Abokar/IPS

The Somali government, regional autonomies, civil society, and the non-militant Islamist group Ahlu Sunna Waljama’a will meet in Garowe, Puntland state from Feb. 15 to 16 to discuss the composition of the country’s new parliament as the transitional period ends this August.

In exclusive interviews with IPS, the Minister for Women’s Development and Family Care, Dr. Mariam Aweis Jama, and the director for Women’s Affairs at the Presidential Palace, Malyun Sheik Heidar, said it was time that Somali women played a key part in the country’s leadership.

Jama said that in Somalia women are denied access to leadership and accused Somali men of not respecting women and preventing them from having a greater role in politics.

A woman has only ever held the ministerial post for Women’s Development and Family Care, and no woman has been appointed to other ministerial roles.

“As I remember, in the country’s history only the Ministry of Women’s (Development and Family Care) was always given to the Somali women. But that time was passed and we are going to have an equal share in the future cabinet,” Heidar said.

Both Jama and Heidar said they want to see more women in various ministerial posts and in the country’s other top leadership positions.

Heidar said that it was shameful that there is no regional female governor in the country, which consists of 18 regions and nearly 100 districts. “We only have one female district commissioner in Mogadishu, and that is unacceptable to us,” she said referring to Deqo Abdulkader, the commissioner of Wardhigley district in Mogadishu.

“Women are about 70 percent of the people and that is why Islam allowed that a man can marry four wives, so it is misfortune to neglect the role of women who are a majority in every community. We need (to be part of the) Presidency, we need a woman to become Prime Minister or Speaker of Parliament,” Jama said adding that Somali women are also lobbying to lead diplomatic missions abroad.

Jama said that according to Article 29 of Somalia’s Transitional Federal Charter, drawn up during the Somali National Reconciliation Conference in Kenya in 2004, women must comprise 12 percent of the transitional parliament. However, she feels they were cheated and not given enough posts in the current government.

Only 41 out of the 550-member Somali parliament are women – a mere seven percent. The Human Rights Committee is the only one of 27 parliamentary sub-committees chaired by a woman, Hawa Abdullahi Qayad.

However, women’s representation in the country’s 20 political parties has grown from five percent to at least 11 percent since 2004, although women mostly work in public relations and women’s affairs.

Women’s representation in parliament is also set to increase to 30 percent when the transitional period ends in August.

At a conference mapping out the country’s new constitution in Djibouti from Jan. 6 to 12, participants unanimously accepted a motion that 30 percent of the next parliament’s seats would to go to women. Somali lawmaker Sheik Jama Hajji Hussein, a moderate religious man and a long-time politician, said he had made the recommendation.

“In the era of Prophet Mohamed … women were teaching at Islamic schools, also the prophet’s wives used to teach some of his companions. So learning from this, women may have a big role in the community and it does not matter if they serve as politicians or a woman becomes the Somali Prime Minister or Speaker of Parliament,” Hussein said.

But Jama said that a 30 percent representation is not enough.

“We are not satisfied with 30 percent and I am telling you with a loud voice that after the transitional period ends we want 50 percent of parliament’s seats to go to women,” Jama said.

“There are thousands of educated women, including hundreds who have specialised in policy, so I am confident that Somali women currently have the knowledge and the power to lead,” she added.

For her part, Heidar wants to be chief of the country’s cabinet. “From now on nothing can prevent us from taking high posts in the country’s leadership and in the future I want to become Somalia’s Prime Minister.” The Prime Minister is the 2nd highest-ranking person in Somalia, after the President.

“In the years to come I will run for Parliamentary Speaker … I am sure someday that a Somali woman will lead parliament, or the whole country,” Heidar said of her plan to occupy one of the top jobs in Somalia.

However, women here still face resistance as Somali men have different views on women’s role in government. Most do not accept that women have a role in policy development or governance. Here, in this Horn of Africa country, religious and cultural zealots preach that women should not play a role in politics.

“Our Islamic religion tells us that those who are led by women will fail, so in accordance with Islam women must refrain from their ambition of leading a country and having representation in policy,” Ugas Abokar Islow Hassan, a well-known Somali tribal leader told IPS, adding that women must refrain from aspiring to political posts.

Sheik Farah Yusuf Mohamed, a fundamentalist preacher and Imam at Al-Huda Mosque in the capital, believes that a “woman’s mind is incomplete to lead a country” and that, according to Islam, they are only allowed to care for their homes.

But Ali Mohammed Nuh, the leader of the United Somali Republican Party believes that Somali women must be allowed to play a role in politics.

“In my party the representation of women has been expanded and I am prioritising that women have more membership in political parties—in my party we have a female deputy chairperson for public affairs,” Nuh said.

“Now women make up about 10 percent of our party’s members and I am very hopeful that the number of women in the United Somali Republican Party will increase in the years to come,” he added.