Trial Sheds Light on Trafficking of Women in Argentina

BUENOS AIRES, Feb 16 2012 (IPS) - A high profile trial for trafficking of women is giving the public a clearer picture of how sex trafficking rings operate in Argentina, with victims who are even forced, eventually, to become victimisers. 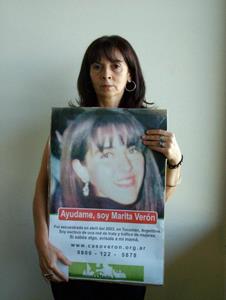 Ten years after 23-year-old María de los Ángeles “Marita” Verón was kidnapped in the northwest province of Tucumán, the trial for her disappearance got underway this month.

Seven men and six women are accused of having had contact with Verón in different brothels, based on the testimony of women rescued from the sex rings.

They are charged with deprivation of liberty and promotion of prostitution.

The question is whether new clues will emerge in court about what ultimately happened to Verón.

The plaintiff is Verón’s mother, Susana Trimarco. In her ceaseless campaign to find her daughter, she discovered how the sex trafficking rings operate, and how they enjoy the apparent protection of members of the police and other public officials.

And along the way, she managed to help rescue 129 victims of forced prostitution.

For her work, Trimarco was granted the International Women of Courage Award by the U.S. State Department in 2007. Shortly afterwards she set up the María de Los Angeles Foundation to Combat Human Trafficking.

The foundation carries out prevention work in schools, community centres and other institutions, to help young people avoid being preyed up on by sex rings. It also provides comprehensive protection and assistance to trafficking victims.

The lawsuit filed by Trimarco helped press Congress to pass a law on prevention and punishment of trafficking in 2008, and boosted the creation of a national programme to prevent and eradicate trafficking and provide support to victims.

“The only thing I want is to find Marita. My terrible suffering started for me when she disappeared,” Trimarco testified in court on Wednesday Feb. 15.

Trimarco, who is generally accompanied by her granddaughter – Verón’s daughter, who is now 13 – found out that Marita was sold to a brothel in the northwest province of La Rioja, and went there to try to find her in 2003.

Posing as a former prostitute seeking to recruit young women for a brothel, she visited houses of prostitution in La Rioja and other provinces in the northwest.

She and her husband Daniel Verón, who died of a heart attack in 2010, helped rescue a number of young women from Argentina and other countries who had been stripped of their legal documents, held against their will, forced into prostitution and cut off from their families.

But she never found her daughter. Some of the young women who were rescued said they had seen Verón, drugged and haggard, holding a baby boy who was apparently fathered by a pimp. They also said they later heard that she was in Spain.

Liliana Azaraf, an activist in the campaign “Ni una mujer más víctima de las redes de prostitución”, launched against sex trafficking by a group of feminists fighting to abolish prostitution, spoke to IPS about how the trial is helping to bring visibility to the phenomenon.

“Cases like that of Marita Verón have an impact and give visibility to the problem of trafficking because they are extreme cases involving middle-class women who did not form part of any prostitution ring. But all cases of exploitation must be condemned,” she said.

Azaraf said the law against trafficking of persons was passed thanks to well-known cases like this one and the work of mothers like Trimarco.

However, the law has been criticised by women’s organisations, which argue that it is based on misguided assumptions.

“We have had problems with the law from the start because it establishes that, in order for a crime to exist, women over 18 who are in these prostitution networks have to prove that they were recruited by means of deception, and without their consent,” she said.

The activist said this is based on the idea that there is “a kind of prostitution that is freely chosen as an employment option, and another kind in which women are kidnapped and forced into the sex trade.”

“Prostitution is always violent, and is based on the inequality of the sexes. It is full of young women pushed to prostitute themselves for survival, who were not recruited by means of force but by the need to make money,” she said.

A new bill, which has the approval of the women’s groups, has already made it through the Senate and will be discussed this year in the lower house of Congress. The new draft law eliminates the distinction between under-age minors and adult women.

According to the Red No a la Trata (No to Trafficking in Women Network), an umbrella group of women’s organisations, there are at least 500 missing women who have fallen prey to sex trafficking rings in this country of 41 million.

But Azaraf questions that figure. She explained that there are women who are not missing but are involved in prostitution rings. They are not held captive, but are allowed to go home and raise their children. But they have to return, and continue to be sexually exploited, she said.

In the face of the growing pressure to investigate trafficking cases, the Justice Ministry set up an office to rescue and support victims of trafficking, which has freed 3,000 people since 2008 according to official figures.

The office of the public prosecutor also created a special unit to deal with trafficking cases. In a recent report, the unit said most trafficking victims were recruited in the northern provinces – the poorest part of the country.

According to the study, in 93 legal cases involving trafficking in six northern provinces, 77 percent of the victims were women, 64 percent were sexually exploited, and 70 percent were drawn in with promises of work.

“These numbers clearly reveal the situation of vulnerability in which women in the northern provinces find themselves,” says the report. It also emphasised police complicity in some cases.

But her case did not receive the same amount of attention.

Her husband, Víctor Purreta, the father of her three-year-old son, spent five years in prison for forcing her into prostitution. But he has consistently denied any knowledge of her whereabouts.

López’s mother, Julia Ferreyra, told IPS that her daughter was beaten by her husband, and that she suspects he had something to do with her disappearance.

Purreta is now out of prison, but he is facing charges in another case, for domestic violence against his new partner, who he also battered and forced into prostitution.

This case, which involves poor women, has not drawn the same attention as Verón’s disappearance, because of the mistaken belief that these women accepted or chose to be prostitutes, according to activists involved in the “Ni una mujer más víctima de las redes de prostitución” campaign against trafficking and prostitution rings.

Azaraf also pointed to the case of sexually exploited women who after a number of years themselves become “madams” in charge of the young women in the brothel – and are then treated as victimisers.

That is happening in the trial for Verón’s disappearance.

A defendant, Daniela Milhein, who is accused of being one of the people who deprived Verón of her liberty, denied knowing the young woman and said she herself had been forced into prostitution at the age of 16.

“For six years I was forced to work for him without receiving a single cent, because he kept all the money,” she said, referring to Ruben Ale, the pimp who fathered her daughter. Ale is not one of the accused in the case.

The testimony heard so far has not helped clarify the whereabouts of Verón. But her mother has not given up hope that she is alive: “She has to appear, and I will keep working until that happens,” Trimarco told the local media.