PORT OF SPAIN, Feb 14 2012 (IPS) - With climate change advancing to the forefront of the most urgent issues facing the islands of the Caribbean, young people – who arguably have the most to gain and lose in future scenarios – are becoming increasingly engaged in charting a path to environmental sustainability. 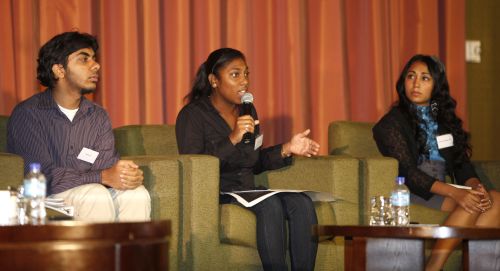 But enthusiasm alone is not enough. They need the right tools to create lasting change, say organisers of Trinidad’s second Youth Forum on Climate Change on Jun. 9, planned to coincide with World Environment Day Jun. 5 and the Rio+20 conference on sustainable development Jun. 20-22, where youth delegations are also fighting to have a voice.

“Our aim is really to create the awareness since young people have indicated that they don’t (fully) understand the issues of climate change and sustainability,” said Linda Hutchinson-Jafar, editor of the four-year-old web-based Earth Conscious magazine, one of the private and public sector groups that organised and funded the first youth forum here last November.

At that event, the first of its kind in the English-speaking Caribbean, 220 youth delegates ages 13-25 from schools and universities across Trinidad converged to brainstorm solutions to problems in their communities, create a model of activism that could be replicated in the wider Caribbean and, ultimately, to build the next generation of environmental leaders.

For a vast majority, it was the first time they were participating in a forum on climate change.

In their final declaration, submitted to the Trinidad and Tobago government as well as officials attending the global climate change conference in Durban, South Africa, young people declared their readiness “to accept our share of responsibility in charting a course which is both sustainable for this planet and all things that inhabit it, having recognised that climate change is the most urgent and pressing issue facing the world in the 21st century”.

They also committed themselves to taking “personal action to reduce our impact on climate change; advocating for sustainability and environmental protection in our communities and schools”, and called on regional governments “to place the interest of the Earth above all other factors in the negotiations to ensure a sustainable future”.

“The declaration really tells governments that they need to keep the environment safe and sustainable for the next generations and to take action in that regard,” Hutchinson-Jafar told IPS.

Looking ahead to the second meeting in June, under the banner of “Green Economy: Sustainable Society”, organisers are hoping that youth delegates will move farther toward concrete actions on environmental protection.

For example, the forum works to partner young activists with the private sector “so they can spread the messages to their schools and their communities and take action, whether it is to recycle paper and bottles to reforestation, composting etc”.

In Trinidad, one such initiative may involve the restoration of the Nariva Swamp, the largest freshwater wetland of 6,234 hectares on the east coast which was declared a forest preserve in 1954.

The Environmental Management Authority (EMA) says it has the most diverse vegetation of the country’s wetlands, with distinct zones of swamp forest, palm swamp, freshwater marsh and mangrove woodlands of global biodiversity value, as well as importance in absorbing carbon dioxide emissions.

“It also provides habitat for large numbers of waterfowl, including migratory species and it is the major wetland in Trinidad which still sustains anaconda, the reintroduced blue and gold macaw and the threatened West Indian manatee,” according to EMA, which is involved in the Nariva Swamp Restoration Carbon Sequestration and Livelihoods Project (NSRP) following years of degradation caused by illegal rice farming.

Launched in 2010, the NSRP has included a pilot project involving the replanting of six hectares of forest by three community-based organisations (CBOs), Villagers Organised in Conserving the Environment (VOICE) as well as farmers and community groups in the surrounding rural villages.

It brings together the Forestry Division, the University of the West Indies (UWI) and the Green Fund.

“Sustainable livelihood is a key component of the project and indeed one of the aspects which the Green Fund took into consideration before approving funding for this project,” said EMA managing director Dr. Joth Singh in a message marking World Wetlands Day 2012 earlier this month.

He notes that people in the surrounding communities traditionally use the resources of the Nariva Swamp to support their diets and livelihoods, including catching river conch, harvesting of forest products, hunting and farming.

“The NRSP seeks to expand these opportunities and train the communities to participate in the management and sustainable use of the available resources,” said Singh, who is also hoping that NRSP will gain wide local, regional and international recognition for its pioneering objectives, approach and inclusion of local communities.

“We intend for this to become a model project that can be emulated by other countries,” he said, adding that the EMA remains committed to the restoration of “this significant wetland and continues to work closely with the communities and CBOs providing opportunities for education, training and development and employment.”

Speaking at the first youth forum, the executive secretary of the United Nations Framework Convention on Climate Change (UNFCCC), Christiana Figueres, reminded young people that climate change has emerged as a defining issue of their generation.

“You are Generation C, or Generation Climate. It is a tremendous responsibility. But your generation also has a powerful tool than no other generation had before: thanks to the internet, to communications technology and to social media, you are the most interconnected generation that ever lived.

“Use that knowledge, that voice, that power. You are more capable of getting your message heard and more capable of linking up with like- minded people than any generation before you,” she added.

The Trinidad and Tobago government has already warned that climate change poses the greatest and most unprecedented threat to humanity in the 21st century.

“Climate change poses significant developmental challenges for countries of the region and in particular Small Island Developing States like Trinidad and Tobago. The adverse impacts of climate change are already being experienced in many parts of the Caribbean,” said Environment Minister Dr. Roodal Moonilal.

Figures released by the government indicate that greenhouse gas emissions for the period 1990-2006 show that the energy, transportation and industrial sectors account for the bulk of carbon dioxide emissions, accounting for an estimated increase of 278 percent, 100 percent, and 86.7 percent, respectively.

“Although Trinidad and Tobago accounts for less than one percent of absolute global greenhouse gas emissions, the government recognises the need to address these emissions in accordance with the decisions under the UNFCCC. Projected impacts of climate change and recent science dictate that suitable actions be implemented,” Moonilal told parliament recently.