BRUSSELS, Feb 3 2012 (IPS) - If the United Nations Children’s Fund (UNICEF) had 1.28 billion dollars it could help 97 million people around the world. 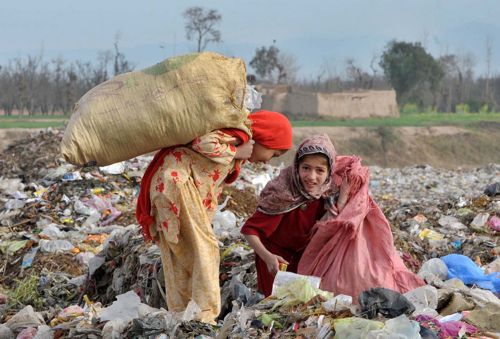 UNICEF's funding shortfall could leave millions of children like these searching for a living in garbage. Credit: Ashfaq Yusufzai/IPS

It could relieve five million drought-affected children in Ethiopia, give 360,000 children in Kenya access to quality education and treat 16,000 children for acute malnutrition in Madagascar. It could provide 2.2 million Somalis with safe drinking water and give a million children in the Republic of South Sudan basic health care.

And those figures are for Eastern and Southern Africa alone, just two regions of the world that UNICEF aims to reach.

Sadly, the U.N. agency secured less than 50 percent of its funding in 2011, suggesting that it will meet only half its expected goals this year.

Each January UNICEF releases its Humanitarian Action for Children report, which identifies children around the world in the most acute need of aid as a result of humanitarian emergencies – be they “natural disasters, human conflicts or chronic crises.”

The report is rife with pictures of children clinging perilously to survival; high-resolution images depict the protruding ribcages of malnourished boys and girls and the harsh realities of whole populations that are slowly starving to death.

Everything about the report is a desperate call for help. But help comes at a price, which, in this case, is a high one.

Released this year on Jan. 27, the appeal – 80 pages long and spanning 25 countries across seven regions – called for 1.28 billion dollars in aid, and breaks each country’s needs into categories such as nutrition, health, water sanitation and hygiene, education, child protection, HIV/AIDS and others.

UNICEF initially appealed for 1.4 billion dollars to be dispersed among 38 countries but revised its request mid-year to account for unprecedented crises like the famine in the Horn of Africa, among other disasters.

According to the report, 44 percent of funding for 2011 was funneled into the Horn of Africa, for which UNICEF activated its highest level of emergency response.

The report adds that, as of October 2011, UNICEF had only received 48 percent of its projected needs, amounting to 854.7 million dollars, for all its humanitarian activities. Final numbers for the entire year are expected to be higher, but only moderately so.

For UNICEF, this means making heart-breaking decisions about which children to provide with life- saving services.

“Sadly, we never really (manage) to respond to all of the humans that are in need,” Marika Hofmeister, an emergency specialist at UNICEF told IPS.

Though a depleted resource pool is a setback for any organisation, a dearth of funding for UNICEF will have particularly severe repercussions, some bordering on disastrous for at-risk populations.

For example, South Sudan received just 36 percent of its projected needs last year, leaving its goal of providing 500,000 people with clean drinking water only partially met. Over 130,000 were excluded from planned supply since many water schemes could neither be rehabilitated nor constructed on the agency’s limited budget.

Meanwhile, armed with just 18 percent of its expected funding for the region, UNICEF’s plan to provide 75,000 children in the Philippines with schools supplies that had been lost or damaged due to floods failed woefully, leaving over 50,000 students without supplies.

Madagascar, Uganda, Congo, Iraq and Iraqi refugees, and Tajikistan were among several countries that received less than 10 percent of their planned funding, according to an October 2011 report.

Funding for UNICEF runs in two parallel streams, one of which contributes to development and programming for the achievement of long-term goals, while the other focuses on humanitarian action. Country offices have some “wiggle room” to divert funds from one stream to another, depending on specific needs.

Hofmeister explained this allows for flexibility in the event of an emergency.

“The import part is to strike the balance between huge emergencies that draw media attention… and the “silent emergencies” that very rarely hit the media and go unfunded for years and years,” Hofmeister said.

However, UNICEF’s efforts are not universally applauded.

In a Jan. 18 report entitled, “A Dangerous Delay“, Oxfam and Save the Children argue that governments, the U.N., NGOs and private donors need to change their approach to drought situations by “managing the risks, not the crisis.”

Referencing the famine in the Horn of Africa, the report claims, “It is clear that the opportunity to avert a crisis was missed.”

Oxfam and Save the Children further noted that the drought and subsequent famine, which has impacted 13 million people, displayed clear warning signs that indicated an impending crisis, including clues from measured rainfall and weather conditions linked to La Niña.

“If an early response had saved even a small proportion of these lives, then thousands of children, women and men would still be alive,” the report stated.

UNICEF’s Global Support section in the funding requirements for 2012 – appealing for 21.9 million dollars – aims to scaffold a degree of preparation against such uncertainties by maintaining a reserve pool of funds that is not earmarked for a particular country or cause, but can be drawn upon for severely under-funded areas.

But this measure, too, is contingent on fund-raising. Last year, Global Support obtained only three percent of projected total funds.

Hofmeister said that UNICEF is encouraging donors to increase or maintain their commitments, in order to protect the basic rights of women and children.

“We are aiming for 100 percent funding, (which is) the only way we can achieve the results that we have planned,” Hofmeister stressed.