FREETOWN, Mar 20 2012 (IPS) - Sierra Leone is instituting major reforms to its education system after the country reported some of the poorest academic results in West Africa. It will start with adding an extra year to the end of secondary school beginning in 2013, and nearly doubling daily classroom hours. 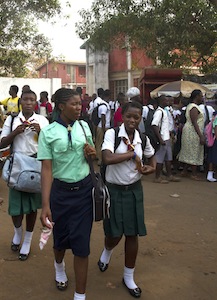 Sierra Leone is instituting major reforms to its education system after the country reported some of the poorest academic results in West Africa. Credit: Damon van der Linde/IPS

“This intervention affects the entire system. Increasing the secondary school programme by one year affects everybody in the entire country,” says Salieu Kamara, the Chief Education Officer of Sierra Leone’s Ministry of Education.

Every year, Sierra Leonean students sit for the standardised West African Senior School Certificate Examination (WASSCE) in their final year of secondary school to determine their eligibility for college and university.

The WASSCE covers not only Sierra Leone, but also other Anglophone West African countries: Ghana, Liberia, Nigeria and the Gambia. This makes competition for entry to international institutions even steeper.

In 2008, about one percent of Sierra Leonean WASSCE entrants scored above what the West African Examination Council (WAEC) considers a passing grade in five subjects, including compulsory English and Mathematics.

Sheriff Sapateh, the head of the Sierra Leone WAEC national office, said that if at least 25 percent of students passed the exam, he would consider that an adequate performance for the country.

“After I published the Chief Examiner’s Report, the government became worried and had to look into it,” says Sapateh.

The government reacted by creating the Gbamanja Commission of Inquiry to determine exactly where the education system went wrong, and what could be done to improve it.

Sapateh says the civil war in Sierra Leone also contributed both directly and indirectly to the poor results of the 2008 exams. Because the war lasted from 1990 to 2001, many students spent their formative school years studying in extremely difficult conditions, experiencing sporadic school closures.

To compound this problem, many qualified teachers fled the country, and those who replaced them were rushed through “crash” training programmes. Though conditions have improved in recent years, much of the residual wartime infrastructure, policies and practices exist to this day.

“Everybody contributed to the poor performance: the community, the home, the children themselves, the school, teachers, and even the government could have done more,” says Dele Sannoh, head of the Department of Education Studies at the University of Sierra Leone’s Fourah Bay College, and member of the Gbamanja Commission.

This means that Sierra Leone will not be holding a public WASSCE this year, keeping most students slated to graduate secondary school in 2012 out of university for an extra year.

The theory behind adding another year of secondary school has much to do with what education specialists call “contact time,” which simply refers to the number of hours students are in the classroom with a teacher.

“The rationale is that we found that there was inadequate work given to that level,” says Sannoh. “Let’s give them an opportunity to have more time in school. We’re hoping that this will work, but if they still waste time, or the teachers are not committed to their work, we’ll go back to square one.”

Ghana attempted a similar reform in 2008. The system was in place for a year, but Sannoh says there were political undertones to the reform and when there was a change in government, the new administration immediately reverted to the old system.

“I think if they had given it time, it probably could have given the results they wanted,” says Sannoh.

Not all schools are performing equally. The Annie Walsh Memorial Senior Secondary School consistently achieves higher than average results for the WASSCE in Sierra Leone. Principal Ophelia Morrison says that two-thirds of her 300 to 400 students regularly pass the exam.

“My school is a ‘Grade A’ school. I have high flyers in my school and I want to believe the recommendation of an additional year does not apply to my school; they should have come up with something else,” says Morrison. “My opinion is that principals should have been interviewed so that our views could have been looked into rather than coming up with a generalised trend.”

Sierra Leonean students will still be able to write the private WASSCE exam in 2013, but only if they pay for it. But, at a cost that comes close to a decent monthly salary of 80 dollars, it is prohibitively expensive for many students.

Imran Sesay is an 18-year-old student at the Muslim Brotherhood Secondary School, and will be a part of the first group of students to stay for an additional year. Because he pays for his own school fees – which are not covered by the government – and living expenses, he says he does not think he will be able to afford the additional costs. In Sierra Leone education costs 25 dollars a year in fees.

“If they add one more year I’ll have to drop out,” he says. “I’m on the street every day trying to find money for survival and at the same time paying my fees.”

This increase in contact time is part of a larger series of reforms, which include changes to teacher training and building teaching infrastructure like school buildings, libraries and computers. Teachers complain about being underpaid, while education administrations say teachers are undertrained.

Though the government says it has increased spending in public education by 36 percent since 2008, financial constraints remain a common complaint throughout all levels of the education system.