WASHINGTON, Mar 14 2012 (IPS) - Less than a year since South Sudan’s independence, thousands of people in the region continue to face the stark realities of secession. 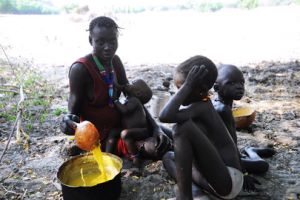 As an impending famine and daily violence grow in severity, the governments in Juba and Khartoum remain mired in disputes over borders and oil revenues.

Among the areas most affected by the latest violence and food shortages are states on the border between Sudan and South Sudan. Thousands of civilians stranded in the Nuba Mountains of Southern Kordofan, a Sudanese province with a population close to 1.1 million, now face starvation – largely a result of the Sudanese government’s move to restrict international humanitarian relief agencies from accessing the most troubled areas.

The recent fighting has destroyed large tracks of farmland and crops essential for isolated populations in Sudan’s Blue Nile State and Southern Kordofan. According to U.S. officials, 250,000 people in the region are threatened by starvation.

“A vast humanitarian catastrophe is already underway, and there is no clear plan for either securing humanitarian corridors to these distressed populations in northern Sudan or for an appropriate pre- positioning of the food and non-food items that are critical,” Dr. Eric Reeves, an expert on Sudan, told IPS.

International Criminal Court indictments for crimes against humanity have not prevented President al-Bashir, and other Sudanese officials, from traveling to countries such as China, Kenya, and, more recently, Saudi Arabia and Qatar to discuss opportunities for trade and investment.

On Monday, Sudanese officials announced they had received 10 bids for oil and gas exploration contracts from foreign firms, according to reports from Reuters.

Both Sudan and South Sudan face staggering levels of inflation and budgetary shortfalls. But a dispute over oil transit fees – South Sudan has few options for exporting its oil other than through Sudanese pipelines terminating on the Red Sea – has left South Sudan's oil production at a standstill and diminished the prospects for economic growth.

Southern Sudanese officials predict they have enough foreign currency reserves to finance the government for another year, but U.S. diplomats remain sceptical about the fledgling nation's ability to finance government outlays for the rest of the year.

"The silver lining is that the difficult economic circumstances in both countries create leverage for the international community," Jonathon Temin, an expert on Sudan at the United States Institute of Peace, said Wednesday.

"Both countries desperately need outside assistance. International coordination of any economic assistance will be crucial, so that it is clear, for both countries, that assistance provided is contingent on certain steps each government must take. Absent those steps, neither country should be bailed out," Temin added.


“Months ago the Famine Early Warning System Network warned that without humanitarian assistance, these populations would be facing ‘near-famine conditions’ in March 2012. Khartoum continues to block international humanitarian assistance, and we are in mid-March. The implications of allowing this to continue are unspeakable, and yet the Obama administration seems paralyzed,” Reeves added.

“Action must be taken very quickly,” Princeton Lyman, U.S. special envoy for Sudan and South Sudan, said during a Senate hearing on Wednesday. “We have a very narrow window before the rain comes and makes the roads impassible (for aid delivery).”

Earlier this week, over 200 people in South Sudan’s state of Jonglei were killed in tribal clashes that have accompanied months of sustained violence, including attacks by Sudanese Armed Forces (SAF) on civilian refugee camps in South Sudan and in neighboring Ethiopia.

Close to 140,000 people have been displaced in the conflict, according to U.N. estimates.

Government officials in Khartoum have denied allegations of war crimes by claiming that the attacks are attributable to South Sudanese rebels and ethnic rivalries.

U.N. officials estimate that the near decade of conflict, including mass atrocities committed in Darfur, has left nearly 300,000 dead, and displaced over two million people.

Earlier this year, South Sudan signed an agreement with Ethiopia and Djibouti that will encourage partnerships focusing on economic and infrastructure development.

U.S. officials have strongly condemned the most recent spate of violence, but some critics of the administration’s policy argue that little progress has been made on the fundamental disagreements between the two nations.

“Going back to March 2009, when President (Barack) Obama appointed retired Air Force General Scott Gration as special envoy to Sudan, U.S. Sudan policy has been a shambles and deeply destructive of the chances for peace,” Dr. Reeves told IPS.

“To be sure, the Bush administration had let implementation of the (2005) Comprehensive Peace Agreement slide off its agenda. But the Obama people – including Gration, Clinton, Senator John Kerry, and presently Princeton Lyman – have compounded error with error, misjudgment with misjudgment.

“The ways are myriad, but they have consistently entailed a failure to understand the nature and ambitions of the National Islamic Front/National Congress Party regime in Khartoum. The U.S. will bear heavy responsibility for the outbreak of all-out war that seems increasingly inevitable.” Reeves added.

The U.S. has reinstated trade sanctions on Sudan, but one component of the administration’s budget request for fiscal year 2013 is 250 million dollars in Sudanese debt forgiveness.

Senior U.S. officials continue to review the sanctions – a scenario made possible after the Obama administration decided to “de-couple” international justice and reconciliation efforts in response to the genocide in Darfur from negotiations over disputed territory.

Amb. Lyman and Nancy Lindborg, an assistant administrator at USAID, emphasised in congressional testimony on Wednesday that humanitarian workers were prepared for immediate relief operations if access were to be granted, and that diplomatic negotiations over a political settlement are continuing in earnest.

“If the government has opened up the area to international access, what we’re hoping is, that will lead not only to a quieting of the hostilities, but hopefully the atmosphere that political talks can start. That will change the atmosphere,” Lyman said Wednesday.

“There is a growing realisation in Khartoum that there isn’t a military solution to a problem and that simply going on with the fighting and facing the opprobrium of a humanitarian disaster is not in their interest…I hoping that we will get better news in the days ahead.” Lymon added.

Congressman Frank Wolf, having recently visited a refugee camp in South Sudan, introduced legislation last week that will focus on the humanitarian crisis there. A similar resolution was introduced in the Senate on Wednesday.

“We need to provide the Obama administration with all the tools and all the authority it needs to seek a comprehensive peace in Sudan, end human rights violations, and bring those guilty of crimes against humanity to justice,” Congressman Jim McGovern, a co-sponsor of the bill, said last week.

Both congressmen stated the bill would be a fitting dedication to the life of Congressman Thomas Payne, a fierce advocate for human rights and genocide prevention in the region, who died last week.

U.S. officials announced this week that a planned conference focusing on international investment opportunities in Sudan has been postponed because of President Omar Hassan Ahmad al-Bashir’s continued intransigence over humanitarian relief and ongoing violence.

While the African Union (AU) announced Wednesday that the governments of Sudan and South Sudan have agreed to a “framework” for settling disputes over citizenship, the most divisive issues remain unresolved.

President al-Bashir, an indicted war criminal, is scheduled to travel to South Sudan for the first time since its independence for additional negotiations over disputed borders and oil fees.

As negotiations carry on, Lyman noted that Khartoum’s resistance to a settlement has been indicative of the atmosphere of mistrust between Sudan, South Sudan and the international community.

“There’s a deep suspicion of the motives of the international community and they see this as ‘we’re not going to go down that path again, we’re going to keep our country together, even if we have to do it militarily.’ So it’s taken a lot of time and effort to say look, you’re looking at it wrong way, and you’re looking at it in a way that will hurt your own interests,” Lyman said on Wednesday.