BAGHDAD, Mar 16 2012 (IPS) - Dozens of bodies bludgeoned to death pop up in Baghdad’s dusty streets like the remains of a wreckage on a beach. They are the corpses of homosexuals and followers of the ‘emo’ fashion who dare to break with the strict canons of the Shia orthodoxy in power. 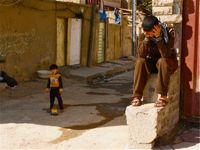 Sadr City has turned into a hell for homosexuals and followers of the ‘emo’ movement. Credit: Karlos Zurutuza/IPS.

“They crushed his head with a concrete block. His name was Saif Asmar and he was a close friend of mine; tomorrow it could be me”.

Ruby (fake name) can hardly cope with his anger and fear as he holds a photo of his friend, barely recognisable after the brutal murder. Since the beginning of the year, death squads have been targeting gay men as well as those who dress in a distinctive Western-influenced style called ‘emo’.

Ruby talks about a surge in the attacks since Feb. 6 that, according to unofficial sources, has led to the killing of more than 80 homosexuals.

“That day they killed Ahmad Arusa in Sadr City and four other people in Geyara – two Shia neighbourhoods in eastern Baghdad. Earrings, nose rings, tattoos…all those are synonymous with either being homosexual, worshipping the devil or both things at a time,” says this young man who left home a month ago after he was threatened.

In a statement released last January, the Iraqi Interior Ministry labelled the ‘emo’ movement “Satanism”. It said “a special police force would tackle the issue”.

Now, the increasing death toll under concrete blocks in the Shia dominated Sadr City in Baghdad adds to those reportedly burned with acid in the Shia neighbourhood Khadimiya, in western Baghdad. Whatever the method, most of those killed had previously found their names on one of the lists littering the streets of the Iraqi capital.

Ruby points directly to the Mehdi militia – a former insurgent group led by cleric Moqtada al-Sadr. Such crimes are being committed in complete impunity, says Ruby.

“Ours is a militia-run government,” complains this young man on the run. “The only possible solution is that Western governments put pressure on Iraq to end this nightmare.”

Dalal Jumma from the Organisation of Women’s Freedom In Iraq concurs, and complains about the lack of a “mandatory separation between state and religion.

“The militias’ letters hanging on the walls even accuse homosexuals or ‘emo’ followers of ‘Satanism for participating in the martyrdom of Imam Hussein’ – the Shia community leader killed in the Seventh century. How can we deal with such monstrosity?” says Jumma at the NGO’s headquarters in Karrada district in southeast Baghdad.

IPS has had access to one of the letters allegedly found in Sadr City – it had a list of 33 individuals classified under their residence block numbers.

“If you don’t quit such licentious attitudes in four days, God’s punishment will fall on you at the hands of the holy Mujahideen – Islamic fighters”, reads a threat written between pictures of two guns.

From Moqtada al-Sadr’s office in Sadr City, local political and religious leader Brahim Jawary denies any involvement in the killings. He calls for “a thorough investigation of any crime, including those committed against morality and the laws of god as a whole.”

It wasn’t a letter on a wall but an email that made Madi (also fake name) run away from her family five weeks back.

“They threatened to tell my family that I am a lesbian if I didn’t leave the country immediately,” recalls this 26-year-old woman in an interview with IPS at an undisclosed location in Baghdad. Apparently, Madi’s fears were far from being groundless.

“Many lesbians die in Iraq at the hands of older brothers. It is yet another ‘honour killing’, a ‘domestic matter’ over which the government will never conduct any investigation.”

London-based NGO Iraqi LGBT estimates that more than 720 gays have been killed in Iraq by extremist militias in the past six years. Madi says she’s lost many close friends.

“Moqtada al-Sadr’s militiamen and Iraqi Security Forces are the most aggressive against us, especially since a fatwa (a ruling in Islamic law) released four years ago said that homosexuals ‘should be executed in the most severe way.’”

Madi says many have been dismembered or burnt alive. She says doctors know the nature of such crimes by the state in which the bodies arrive. IPS has confirmed such claims with doctors who preferred to remain anonymous.

In a report published in August 2009, Human Rights Watch reported that many of the victims were interrogated before being murdered to extract names of other potential victims.

“They practise grotesque tortures, including gluing men’s anuses shut as punishment,” the New York Based NGO added. Combined with massive food intake and diuretics, such practice leads to an atrocious death of the victims.”

Anger is also tangible inside the Iraqi Parliament. “We’ve been moving backwards since 2003 on human rights”, says Ashwaq Jaf, a Kurdish Alliance MP. “The crux of the matter,” she says, “is that we have two penal codes: there’s the Iraqi Constitution, but also the sharia. Contradictions between both often lead to ambiguous and perilous vacuums.”

Not everybody inside the Green Zone shares such a viewpoint. “The stigma of being gay in Iraq is only a reflection of our society,” says Saad al-Muttabili, a senior official with Iraqi Prime Minister Nouri Maliki’s Dawa party.

Muttabili points to “either Sunni militias close to al Qaeda or Iran-backed militias” – without any reference to Moqtada al-Sadr’s paramilitary group’s involvement. Maliki owes his second term to Sadr’s support.

“The situation is gradually coming to normal and it is not surprising to come across gay couples holding hands in Karrada,” says Muttabili. “For the time being, several shopkeepers of the commercial district have removed skulls, T-shirts or any other item (suggesting ‘emo’ membership) that could lead to unfortunate misunderstandings.”