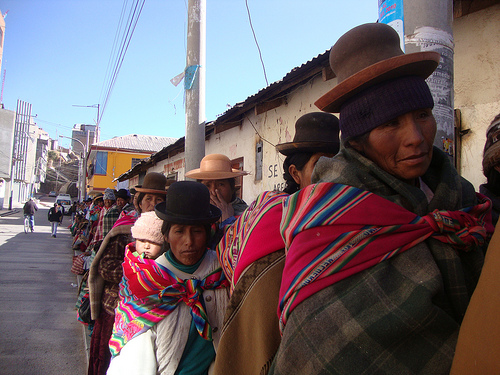 UNITED NATIONS, Mar 2 2012 (IPS) - In 2008, delegates meeting for the annual U.N. Commission on the Status of Women (CSW) agreed that much greater investments in women and gender equality were a critical – and overlooked – aspect of sustainable development.

For example, according to UN Women, while the international community gave 7.5 billion dollars in official development assistance to rural development and the agricultural sector in 2008–2009, a mere three percent was spent on programmes in which gender equality was a principal objective, and only 32 percent to those in which gender equality was a secondary objective.

Four years later, there has been some forward movement in a number of countries, but in many others, progress remains slow and uneven, a situation that is exacerbated by the ongoing global financial crisis.

Rural women continue to face limited access to productive resources, such as agricultural inputs and technology; only five percent of agricultural extension services are provided for women farmers.

As the CSW meets again here from Feb 27 to Mar. 9, panellists from around the world sat down Thursday to evaluate the evolution of financing for gender equality and women’s empowerment in their home countries, and chart a way forward.

“It’s time to promote gender equality and for that purpose we need a change of paradigm, we definitely need to change our way of thinking,” said Maria Almeida, vice finance minister of Ecuador.

Dr. Ing Phavi, minister of women’s affairs in Cambodia, cited a series of measures taken by the Cambodian government that have proved successful in enhancing gender equality across different areas.

As a result of extensive promotion across ministries and affirmative action policies, the number of female civil servants increased by 34 percent. At the sub-national level, more women were appointed as deputy governors or heads of government departments.

“In education, gender disparity has been eliminated in the primary and lower secondary education,” she noted. “Remarkably, with the focus on training and deploying female teachers, the female ratio at the primary level reached 46 percent in 2009/2010.”

However, fewer girls than boys continue on to get a higher education.

Asked what more needs to be done, Phavi told IPS, “The most important thing to understand is that gender equality is a government policy and it has to mainstream the poverty reduction strategy.

“Poverty reduction means taking care of growth, trade, agriculture development, well-being in terms of health, education and so on,” she said. “Gender is already inside all sectors so it should be part of the poverty reduction strategy.”

Mohammed Chafiki, director of studies and financial forecasts for the ministry of economy and finance in Morocco, spoke about Morocco’s transition to equal rights and liberties for men and women.

In April 2011, the country ratified the Convention on the Elimination of All Forms of Discrimination against Women (CEDAW), a key instrument often described as an international bill of rights for women.

Morocco also adopted a new constitution in July that included many articles which expressly enshrined gender equality. For example, Article 19 affirms that men and women have equal civil, political, economic, cultural and environmental rights and liberties.

“In Morocco, we now need to continue the institutional reform. We are reforming our financial laws so it integrates gender considerations irreversibly,” Chafiki told IPS.

“But in order to move forward with gender equality, it is not all about the government. Local communities will also have to take concrete actions,” he said.

“To finance gender equality and women empowerment, we also need partnerships. We need partnerships with the private sector, with NGOs, with governments, of course, and we need international cooperation.”

Chafiki cited significant progress in reducing educational disparities as one of the country’s primary achievements.

Gerhard Steger, director general of budget for the ministry of finance in Austria, explained how the government now integrates gender considerations into budgets.

The concept of gender responsive budgeting (GRB) was included in a comprehensive budget reform package that was unanimously adopted by parliament. It features a medium-term expenditure framework, accrual budgeting and accounting and performance budgeting.

“First of all, we transformed our budget from a traditional steering instrument of resources, asking the question ‘who gets what?’, into a comprehensive instrument for resources and results,” Steger told IPS.

“So we ask two questions: who gets what, and who has to deliver what for public management,” he added.

“We ask each and every ministry to define no more than five top objectives for the ministry, which are part of the budget decision in parliament, and at least one of those objectives has to be a gender objective.

“Gender is directly interpreted into the performance budgeting process in Austria. Therefore every ministry has to contribute – with no exceptions.”

Steger stressed crucial lessons that can be drawn from the Austrian experience.

“To make GRB a success, the design needs to be simple and focused on the most important aspects. If the design is too complex, GRB will very likely be a failure,” he said.

“We also have to make gender relevant and thus integrate it into the budget and to create awareness for gender issues to convince decision makers to support GRB.”

While national governments must take the lead, key agencies like UN Women are also working hard to steer funds into gender-oriented development.

On Thursday, UN Women announced it will give out 10.5 million dollars in grants to organisations working to advance economic and political empowerment of women in Africa, Asia and the Pacific, Latin America and the Caribbean, and Europe and Central Asia.

The grants will start at 200,000 dollars for initiatives that “make tangible improvements in the lives of women and girls, from enabling women candidates to run for office, to managing resources to support themselves and their families.”

“At this moment of historic change, we cannot afford to leave women out. These grants will advance women’s efforts to achieve greater economic and political equality during this time of transition,” said Michelle Bachelet, executive director for UN Women.

Since its creation in 2009, the Fund has invested a total of 43 million dollars in 40 countries around the world for projects working for gender equality.