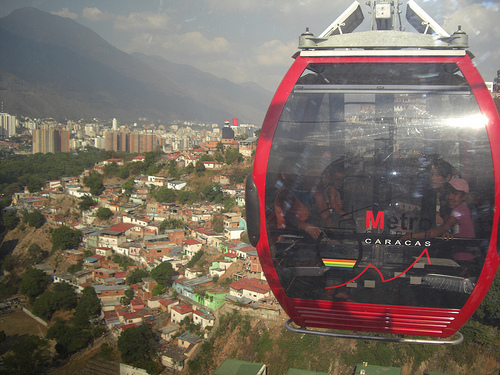 CARACAS, Apr 27 2012 (IPS) - “It changed our lives” is a sentiment frequently heard from commuters who use Metrocable, the aerial cable car system that connects one of the poor hillside neighbourhoods in the Venezuelan capital with the city’s public transport system.

The Metrocable system that has connected the hilltop neighbourhood of San Agustín with the Caracas metro since January 2010 is the second mass transit aerial tramway in Latin America, after the one that has been operating in Medellín, Colombia since 2006. And in July 2011, a third system began to operate in Rio de Janeiro, linking hillside favelas or shantytowns with the rest of the city.

“Metrocable has boosted our dignity,” María Eugenia Ramírez, 51, a cable car security guard who lives in San Agustín, told IPS. The poorest part of her neighbourhood lines a steep slope in the hills that surround the valley where Caracas is located at 1,000 metres above sea level.

“I wasn’t prepared to walk through the air,” says Ramírez, who has seven grandchildren and has already lost two of her four children.

Naiger Hernández and Doralis Viera also remember their first vertigo-inducing rides in the cabins that carry commuters between the system’s five stations in nine minutes.

The San Agustín Metrocable is the first of the innovative systems designed to alleviate the traffic chaos in the metropolitan area of Caracas. But the next projects have been delayed by financial and engineering problems.

The Bolivarian Cabletrain, an elevated train moved by cables, will link Petare, a sprawling area of mostly slums at the eastern end of the Caracas valley that is home to more than 700,000 people, with neighbouring areas.

Haiman El Troudi, president of the Caracas metro company, said in March that the first three stations would be operating by November. According to projections, 115,000 people a day will ride the train.

And in the future, the Bolivarian Cabletrain will hook up with a similar train in Guarenas, a commuter city of 245,000 people 33 km east of the capital, which will serve an estimated 150,000 people a day.

In addition, work on the Metrocable of Mariche has resumed. The aerial cable car system will link that shantytown in the hills on the eastern fringe of Caracas with a metro station. César Núñez, commissioner of works at the Caracas metro company, said on Apr. 17 that the system would begin to operate in December, and would serve 60,000 people a day.


The 52 aluminium cabins, which seat eight people each, automatically shuttle back and forth on cables, between the five steel and concrete stations, along a 1.8-km route that extends over a steep, 200-metre-high hill.

The system, whose construction cost 318 million dollars and took over three years, was built by Odebrecht – a Brazilian corporation that since the past decade has controlled the main civil engineering projects in Venezuela – with equipment and technology from the Austrian firm Doppelmayr.

“In the cabins you run into people you didn’t know and people you knew before but had lost touch with. Now we have that day-to-day contact again, neighbourly relations,” said Ramírez, one of the neighbourhood leaders, at a weekly meeting of community councils held to organise activities around Metrocable.

Since 2006, the community councils have been the key component of “people’s power”, promoted by the government of populist left-wing President Hugo Chávez, who has been in office since 1999.

There are already 35 community councils in the district, and the plan is to reach 38, Alfredo Mariño, an architect who coordinates the San Agustín integral development plan, which is associated with a Brazil-Venezuela presidential agreement signed in 2009, told IPS.

The plan is aimed at creating a methodology for tackling the issue of informal or unplanned neighbourhoods, in contrast with “the ‘formal city’,” he said.

“These neighbourhoods are urban manifestations of a highly unequal system, which relegates large segments of the population to living conditions that at times are subhuman, where they have to subsist by creating their own habitat,” Mariño said.

The hilly southern part of the neighbourhood, San Agustín del Sur, was the site of the first self-construction project in Caracas, and offers favourable conditions for implementing a broad experimental multi-project plan like the one coordinated by Mariño, or a new transportation system such as Metrocable.

The neighbourhood, which is home to just over 45,000 people, has a population density far lower than that of other poor districts lining the hillsides. It also preserves part of the original greenery, and its soils are relatively uneroded.

At the same time, Mariño pointed out, the neighbourhood has “a strong urban cultural and social tradition.” San Agustín was settled mainly by people from a region with a large black population, which helped strengthen the community’s sense of identity, in its efforts to reinforce the dignity of a marginalised culture.

Before the cable car system began to operate, local commuters had to climb down hundreds of steps every day, or ride in jeeps that operate as collective transport on the neighbourhood’s steep roads, to reach the metro station or the largely unregulated system of often rickety buses and vans that wind their way through the chaotic traffic in Caracas.

San Agustín del Sur “is an enclave isolated by different barriers, a kind of ghetto,” said Mariño. “We are seeking to replace the exclusion with inclusion on multiple levels.”

“Inclusion” is a buzzword frequently used by experts and users of Metrocable when they talk about what the system has achieved – and which aspects of the project have gone unfulfilled, such as the promise of social services like day care centres and shops that were to be given a space in the stations – now that it transports an average of 15,000 people a day.

Since June 2011, riders have had to pay for a ticket, at a price equivalent to 23 cents of a dollar, integrated with the metro ticket system.

“One condition set by President Chávez was that the construction project had to include the local people from the neighbourhood, as did Metrocable itself: all of its workers are from San Agustín,” said cable car operator Jenny Álvarez, a 35-year-old mother of two.

Ramírez stressed that “many fathers and young guys who were using drugs were given the opportunity to work on the construction project, and now they are men leading decent lives.”

She added that “the community takes care of Metrocable; no one touches the installations.”

Caracas, a city of five million people, was the most violent capital in the Americas in 2011, with a murder rate of 108 per 100,000 people, according to the United Nations. Most of the homicides occur in poor neighbourhoods.

In response to criticism of the cost of the system and the relatively limited number of people using it, Ramírez replied that “if this had been built in ‘las lomas’ (the hills where the wealthier neighbourhoods are located) it would have been fine, but since it was built in the ‘cerros’ (the steeper hills) where the ‘barefoot blacks’ live, they’re opposed to it,” she said, referring to opposition-aligned media and experts in a country marked by extreme political polarisation.

In Caracas, the hills are known by different terms depending on the social strata: they are called “cerros” when they are the site of shantytowns; “colinas” when the residents are middle class; and “lomas” when the neighbourhoods are upper middle class.

Odebrecht hired paintings by Natalya Critchley, a British artist who has lived in Venezuela for over a quarter century, for display in the Metrocable stations.

Critchley, who is known for her paintings of industrial landscapes, told IPS that Metrocable is “a non-invasive transport system, with a low impact on space.

“However, it should not only be limited to that, but should serve to influence public spaces, apply green technologies, create infrastructure, like a boulevard, and generate activities to benefit the barrio, including a tourist route. The view of the city from the stations is amazing, and it is not adequately exploited,” she said.

But until all of that happens, cabins named after Venezuela’s 23 states, and basic values – like inclusion, patriotic fervour, ethics, equity, freedom, solidarity or peace – are already part of the urban landscape, visible, as they shuttle up and down, from roads and highways down below.