HAVANA, Apr 26 2012 (IPS) - As a result of climate change-related extreme weather events like a rise in the sea level and increasingly intense storms alternating with drought, Caribbean island nations are facing the challenge of adopting adaptation measures that could be too costly for their budgets. 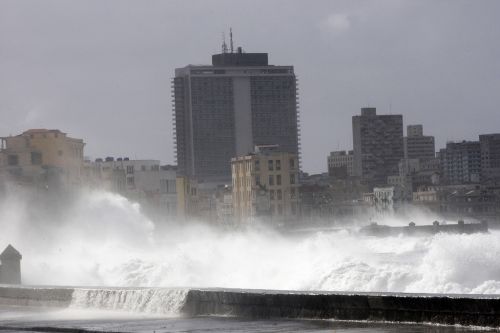 One important message from the report is that costly investments are not needed to mitigate the effects of extreme weather events; there are other ways of dealing with the impacts that do not involve major spending on infrastructure, he told IPS.

That clarification is important because funds for climate change adaptation are scarce in this region, added the expert, who is co-chair of IPCC Working Group II: Impacts, Adaptation and Vulnerability.

The IPCC, which was established in 1988, has published four comprehensive assessment reports reviewing the latest climate science, and was awarded the Nobel Peace Prize in 2007 for its “efforts to build up and disseminate greater knowledge about man-made climate change, and to lay the foundations for the measures that are needed to counteract such change.”

Field was in Havana to participate in a workshop held to divulge the results of the IPCC “Special Report on Managing the Risks of Extreme Events and Disasters to Advance Climate Change Adaptation”, produced as a tool for climate adaptation policy-making.

According to statistics provided in the Apr. 18-19 workshop, the rise in sea level could lead to a reduction in the size of the Caribbean islands and have a negative impact on infrastructure, including airports, roads and capital cities, which tend to be located near the coast.

More than half of the population in the region lives less than 1.5 km from the coast. Ian King, an expert from Barbados with the United Nations Development Programme Caribbean Disaster Risk Reduction Initiative (UNDP CRMI), said the first challenge is to assess the threats, in order to decide on the most suitable adaptation policies.

King told IPS that research on management of coastal areas and marine ecosystems has been carried out in Barbados, and that it is now a question of investing in these areas to protect not only the species but the population and infrastructure, facilitating access to information that helps evaluate the best way to manage disaster risks.

One of the ways is to model different scenarios of the risk of high-intensity storms and their impact on coastal areas, King said. Better adaptation policies can be established on this more scientific basis, he added, saying the decision of whether or not to pull out of at-risk areas largely depends on the communities themselves.

Although it is clear that adaptation to climate change is a pressing need, there is a problem of financing for programmes in countries with weak economies like the islands of the Caribbean.

“It is precisely the lowest-income sectors that are most vulnerable to these problems,” Beat Schmid, Oxfam director in Cuba, told IPS.

He said the financing of adaptation programmes in developing countries by those who caused global warming was a question of “climate justice.”

There is a broad scientific consensus that the rise in the average global temperatures is due to greenhouse gases released into the atmosphere by human activities, mainly in the industrialised nations.

Schmid pointed out that in international negotiations, Oxfam and other organisations advocate the creation of a 100 billion dollar a year global fund to finance the adoption of concrete adaptation measures.

“There are also other mechanisms on the table, such as a financial transaction tax and an airline ticket tax,” he added.

The capacity of developing nations to undertake adaptation measures is limited, added the expert from Oxfam, an international confederation of 14 organisations working with over 3,000 partners in more than 100 countries to come up with lasting solutions to poverty.

In Schmid’s view, Cuba is a symbol of what can be achieved. But he clarified that this is a country with a strong state whose social policies reach the most remote areas, and which has invested steadily in human capital.

He also mentioned that this country has carried out large-scale, long-term programmes focusing on water sources and forests, for example, which started to be implemented years ago, not with the idea of adaptation, but to reduce risks like water scarcity and desertification – problems that are aggravated by climate change.

“But many countries do not have these strengths, or the level of poverty is so high that governments cannot even think about climate change adaptation programmes,” he said. “Even in the case of Cuba, the needs far surpass the possibilities of financing these programmes.”

He also lamented that there is still talk of each country paying for adaptation measures, and that only five industrialised nations are living up to the commitment to spend 0.7 percent of GDP on development aid, while several countries have actually cut their official development aid.

The IPCC special report on risk management warns that economic losses caused by global warming-related natural disasters are increasing, and this will have a great impact in the future on areas like tourism, agriculture and water supply.